Examples of Faith (VI): the Centurion

A new article in the series on figures from the Old and New Testament who offer us an example of a strong faith, with a heart open to God's love. 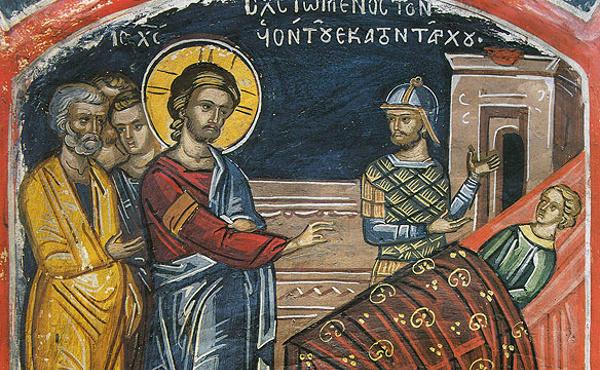 St. Luke tells us that our Lord, when he finished the Sermon on the Mount, entered Capharnaum. Now a centurion had a slave who was dear to him, who was sick and at the point of death. When he heard of Jesus, he sent to him elders of the Jews, asking him to come and heal his slave.[1] The scene is quite enchanting. At the beginning of our Lord's public life, during his ministry in , envoys come seeking a miracle. They are sent by a centurion, an important person in the city, whose servant is gravely ill, to ask for his cure.

The sending of those messengers is the result of a sense of unworthiness on the part of the centurion. He didn't consider himself worthy to appear before Jesus, nor for Jesus to enter into his house, that of a gentile. Everything points to the officer having a high concept of Jesus' dignity and to his knowing the laws and customs of the Jewish people regarding their dealings with gentiles. And therefore when he learned that Jesus was coming towards his house, he sent a second group of messengers asking him not to bother to come there. They made their message known to our Lord with words that the Church evokes every day in the liturgy of the Holy Mass: Domine, non sum dignus ut intres sub tectum meum, sed tantum dic verbo… [2] Lord, I am not worthy to have you come under my roof . . . But say the word, and let my servant be healed.[3]

Our Lord praised this man's attitude and exclaimed to the multitude accompanying him: I tell you, not even in have I found such faith.[4] When the messengers returned to the house, the servant was already cured. St. Luke emphasized that Jesus marveled at the centurion's humility and faith. This time it had been a gentile, that is, someone who didn't belong to the Chosen People, who had given an example of faith, filling our Lord with joy.

Jesus said that the centurion had acted with faith, shown in his absolute confidence in our Lord's power, his simple humility, and his recognition of Christ's dignity. All of this took place before the eyes of the multitude surrounding our Lord, with the military officer openly expressing his unworthiness and showing his faith. Jesus praised the centurion for his humility and trust and the recognition that he came from God. These are the dispositions that the Church wants to stir up in our heart in asking us, right before receiving Holy Communion, to address our Lord with the centurion's words, thus increasing our dispositions of faith, humility and trust.

The centurion had heard people talking about Jesus and his power to cure. Perhaps some of our Lord's words from the Sermon on the Mount had reached him or someone had told him about a specific miracle. In any case, he could not have heard much news, since Jesus was just beginning his public life. Nevertheless the little that had reached him had been enough to make him believe and trust in Jesus; his heart had been moved to believe in Christ's power, and to perceive his dignity.

Faith is a reasonable gift to God, since it rests on motives that make it reasonable to believe; even more, these motives tell us that we should believe, since together with the grace of God, we have been given sufficient signs to place our faith in him. We do not believe in the absurd, but in a reality that is above our intellect. And we believe because we have been given sufficient reasons to take the step towards faith in a reasonable and sound manner. Faith would not be a gift offered to God if it did not have these two characteristics. God wants the assent of our intellect to his word, not the annulling of our reason; he wants its openness to the truth, not its being blinded to it by adhering to the absurd. St. Irenaeus wrote: “Because man is possessed of free will from the beginning, God, in whose image he was made, has always given him advice to keep fast to the good, which comes from obedience to God. And not only in works, but also in faith, has God preserved the will of man free and under his own control . . . as is shown in the words of Jesus to the centurion: 'Go and let it be done according to your faith.'"[5]

Faith is a human act that perfects the human person, which would not be the case if it led one to act against reason. Faith is not a degradation of the intellect, but an opening to the truth through trust in the one who proposes it to us. Trust is essential for faith to be reasonable. In the case of theological faith, it is an adherence that is owed to God and only to him. “Faith is first of all a personal adherence of man to God. At the same time, and inseparably, it is a free assent to the whole truth that God has revealed. As personal adherence to God and assent to his truth, Christian faith differs from our faith in any human person. It is right and just to entrust oneself wholly to God and to believe absolutely what he says."[6] “It is reasonable to have faith in him, to stand fast on his word."[7]

Faith is a reasonable gift to God, but the “rationality" of faith does not justify what we might call an untrusting heart, a hard heart, which needs too many reasons to believe. We see this reflected in our Lord's words to those who refused to accept his resurrection despite the trustworthy witnesses. St. Mark says that he appeared to the eleven themselves as they sat at table; and he upbraided them for their unbelief and hardness of heart, because they had not believed those who saw him after he had risen.[8] Our Lord's reproach for the unbelief and hardness of heart of those disciples shows us the importance of a heart that is uncomplicated and open to faith, like the centurion's.

In order to believe, humility and simplicity of heart are of great importance, since it is in the heart that “we become open to truth and love, where we let them touch us and deeply transform us."[9] Faith commits the whole person, since it is, above all, trust in God who reveals himself and trust also in the One who has offered the testimony of his word and life, and who continues offering it through his Church: Jesus Christ. This trust, essential for faith, involves not only the intellect, but also the heart, “precisely because faith is an opening to love."[10] We read in the Letter to the Romans: if you confess with your lips that Jesus is Lord and believe in your heart that God raised him from the dead, you will be saved. For man believes with his heart and so is justified, and he confesses with his lips and so is saved.[11]

Faith is a gift to God, because it is an entrusting of oneself to him. The excessive zeal for certainty, stemming from mistrust, is a serious obstacle to faith. Faith entails a twofold gift. Above all, it is a gift of God to man, a grace; but it is also our response to God, a giving of ourselves in a trusting openness: “To make this act of faith, the grace of God and the interior help of the Holy Spirit must precede and assist, moving the heart and turning it to God, opening the eyes of the mind and giving 'joy and ease to everyone in assenting to the truth and believing it.' To bring about an ever deeper understanding of revelation, the same Holy Spirit constantly brings faith to completion by his gifts."[12]

Everything is possible for the one who believes

A faith imbued with trust is what makes “miracles" possible, especially in the apostolate. As Saint Josemaria wrote in The Way: “Omnia possibilia sunt credenti. Everything is possible for one who has faith. The words are Christ's. How is it that you don't say to him with the Apostles: Adauge nobis fidem!—Increase my faith?"[13]

In confronting difficulties in the apostolate, he used to say: “Ecce non est abbreviata manus Domini! God's arm, his power, has not grown weaker."[14] And he also wrote: “So you are a nobody. And others have done wonders, are still doing them, in organization, in publicity, in the press. And they have all the means, while you have none? Well then, just remember Ignatius. —Ignorant, among the doctors of Alcala; penniless, among the students of , persecuted, slandered... —That is the way: to love and to believe and... to suffer! Your Love and your Faith and your Cross are the infallible means to give effect—eternal effect—to the longing for apostolate that you bear in your heart."[15]

These words were written by Saint Josemaria at the beginning of Opus Dei, in the midst of circumstances that at times were humanly difficult and that seemed to make what God was asking of him impossible. His words and example can serve as a spur for us when the weight of our own weakness is especially evident, and it seems that what God is asking of each one of us is little less than impossible. Then we have to ask our Lord for a simple heart that does not demand human certainty, a heart like that of the centurion in Capharnaum. A heart that, because it is open to God's love, is capable of dedicating itself generously to others with the certainty that faith brings and with the security that hope gives.