Fourth article in the series on figures from Scripture who are examples for us of strong faith. Elijah shows how God helps those who turn to him in prayer, especially in times of difficulty.

After Abraham, Moses and David, we now turn to one of the most famous of the Old Testament figures, the prophet Elijah. The Catechism of the Catholic Church calls him the "'father' of the prophets, 'the generation of those who seek him, who seek the face of the God of Jacob' (Ps 24:6)."[1] Elijah, like Moses, enjoyed great intimacy with God. What can we learn about a life of faith from this "man of God," as he is often called in the Scriptures?[2] We shall see that Elijah brings to the fore one of the demands of faith: the need to worship God and God alone. Moreover the life of Elijah, a man of like nature with ourselves,[3] shows how God helps those who turn to him in prayer, especially in times of difficulty. 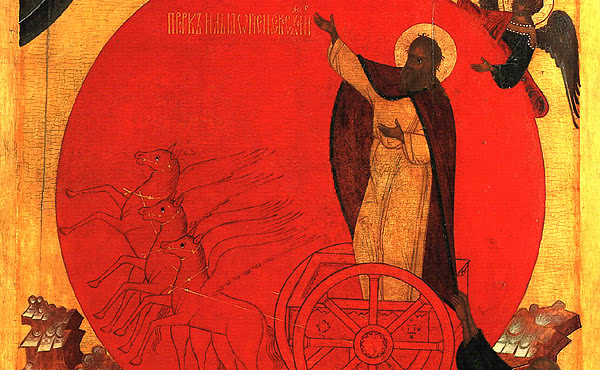 Let this people know that you are God

Elijah the Tishbite lived in the kingdom of Israel during the eighth century BC. His name, which means "my God is the Lord," sums up the central role of his mission: to remind people that there is only one true God and that he alone should be worshipped. Elijah had to do so precisely when King Ahab, under the influence of his wife, Jezebel, adored a foreign god, and the worship of the God of Israel was carried on side by side with idolatry.[4] "The people worshipped Baal, the reassuring idol from which it was believed that the gift of rain came, and to which was therefore attributed the power of making fields fertile and giving life to people and animals. In spite of claiming to follow the Lord, an invisible and mysterious God, the people were also seeking security in a comprehensible and predictable god from whom they believed they could obtain fruitfulness and prosperity."[5]

In this situation, God chose Elijah to speak to the people on his behalf. The prophet proclaimed to Ahab what the consequences of his apostasy would be: As the Lord God of Israel lives, before whom I stand, there shall be neither dew nor rain these years, except by my word.[6]

Years later, when the effects of the drought had become dramatic,[7] the Lord again sent Elijah to the king. The prophet asked Ahab to gather all of Israel, together with the prophets of Baal, on Mount Carmel. The king agreed, and when the people were gathered Elijah shouted out his defiance: I, even I only, am left a prophet of the Lord; but Baal's prophets are four hundred and fifty men. Let two bulls be given us; and let them choose one bull for themselves and cut it into pieces and lay it upon the wood, but put no fire to it; and I will prepare the other bull, and lay it on wood, and put no fire to it. And you call upon the name of your god, and I will call upon the name of the Lord, and the god who answers by fire, he is God.[8] The proposal was meant to show everyone who was the true God, since the sin of the people did not consist of having forgotten the Lord completely, but rather putting him alongside other gods.

The numerous prophets of Baal called out for several hours, but nothing happened. Then Elijah's prayer was answered immediately: fire came down from heaven and consumed the bull, the wood and even the water that the prophet had ordered to be poured abundantly over the victim. Faced with this evidence the people fell on their faces and exclaimed: The Lord he is God, the Lord he is God![9] The cult of Baal, the rain-god, had been revealed as false and the existence of gods other than the God of Israel discredited.

During the confrontation, Elijah acted with the full confidence of faith, the complete trust that came from knowing he was in the hands of the One who is stronger than men and even nature. The mockery he hurled at the prophets of Baal while they called on their god showed his confidence that the Lord would act in his favor: Cry out loud, for he is a god; either he is musing, or he has gone aside, or he is on a journey, or perhaps he is a asleep and must be awakened.[10]

Elijah can rightly be called the prophet of the first commandment, which commands us to believe in God and adore him, loving him above all things, following no other gods.[11] Elijah defends the first consequence of this commandment: to render worship only to the Lord.

As Benedict XVI explained, "Only in this way is God recognized for what he is, Absolute and Transcendent, ruling out the possibility of setting him beside other gods, which would deny that he was absolute and relativize him. This is the faith that makes Israel the People of God; it is the faith proclaimed by the well-known text of the Shema Yisrael: 'Hear, O Israel: The Lord our God is one Lord; and you shall love the Lord your God with all your heart, and with all your soul, and with all your might' (Dt 6:4-5)."[12]

This commandment forbids us to put the one God on a level with other gods. Even though many centuries have passed, and present circumstances are quite different from those of ancient Israel, the temptation to remove God from his proper place is as real today as it was then.

On finding other interests or concerns that take first place in our head or heart, we can well ask God to re-enkindle our faith and make it really operative again, in such a way that nothing—no created being, no thought, no desire of our ego—may lessen the total dedication we owe him.

Elijah's response can encourage us to be valiant when we have to give public witness to our faith, faced with attempts—old, but always renewed—to reduce religion merely to private life. The attempt is made to exclude any reference to God from social life, as though talking about God could offend some people. Elijah was not satisfied with his own fidelity to the Lord. On Mount Carmel he prayed that all Israel might know that the Lord was the true God, who converts people's hearts.[14] Faith cannot be hidden away; it is "born from listening, and is strengthened by proclamation."[15] Faith "implies public testimony and commitment. A Christian may never think of belief as a private act."[16]

Take away my life, for I am no better than my fathers!

After the holocaust on Mount Carmel, the people acknowledged that the Lord was the true God. Soon afterwards, the king witnessed how the prophet obtained from the Lord an end of the drought.[17] But at the moment of Elijah's greatest triumph, his life took a sudden turn for the worse. The king's wife, indignant at what he had done, sought to kill him. Fearing for his life, Elijah escaped into the desert. There, exhausted by his journey and by the bitterness he must have felt on seeing himself abandoned when confronted by the queen's hatred, he prayed for death: It is enough; now, O Lord, take away my life; for I am no better than my fathers.[18]

For years, Elijah had been the only witness in Israel to God. He had just faced down four hundred and fifty prophets of Baal before all the people and defied the king's hostility. But now, faced with Jezebel's threats, he fled as far away as he could. What had happened to his trust? Did he no longer have confidence in God, who had accompanied him until now with so many marvels?

In Saint Josemaria's life too there were moments when, like Elijah, he experienced fear: for example on the eve of October 2nd 1936, in the first months of the Spanish Civil War. The founder was hiding along with others in Madrid, when they were warned that the house was about to be searched and that if found they could be shot. He experienced both "the great joy of being about to be united forever to the Blessed Trinity, and the clarity with which God made me see that I was worth nothing and could do nothing; and so I trembled with real fear."[19]

Maybe we have not been through such an extraordinary situation. We have, however, experienced discouragement: perhaps on receiving bad news, or being confronted with an apparent apostolic failure or proof of our own wretchedness. As Saint Josemaria also wrote: "Father, you told me, I have committed many errors, I have made so many mistakes. I know, I replied. But God our Lord, who also knows all that and has taken it into account, only asks you to be humble enough to admit it and that you struggle to make amends, so as to serve him better each day with more interior life, with continual prayer and piety, and making use of the right means to sanctify your work."[20]

As happened with Elijah, adverse circumstances should lead us to call on God trustingly and sincerely. Then is the time to practise the virtue of faith, together with hope, virtues that we need especially at times of loneliness and apparent failure, even more so than at times of triumph and popular acclaim. Elijah's prayer when he felt the hopelessness of his situation was very pleasing to God, because it came from a sincere and humble heart that burned with zeal for the Lord's cause and was ready to accept whatever God chose to send him. And his humble prayer quickly received an answer. Twice the Lord sent an angel who woke him and bade him eat and drink. Elijah rose, and ate and drank and in the strength of that meal he traveled forty days and forty nights until he arrived at Horeb, the mountain of the Lord.[21]

Our Lord never abandons those who work in his cause. Elijah, that man of God, had always lived for the Lord, who sustains him in adversity, helps him persevere, and gives him the means he needs to accomplish his mission. Despite all the difficulties and reversals, his life was fruitful and happy. But the prophets of Baal, who were fed at court, perhaps thought that by flattering the queen and bowing to Baal they were assuring themselves a quiet life. And just the reverse happened. It is better to sit at the Lord's table than that of idols; it is better to be the Lord's servant than the slave of sin.[22]

There is no greater freedom than to know that we are creatures, and to adore God our Creator. This is the most effective remedy against idolatry. "Those who bow to Jesus cannot and must not prostrate themselves before any earthly authority, however powerful. We Christians kneel only before God."[23]