In his 7 October general audience, Pope Francis resumed his catechesis on prayer, speaking about the prophet Elijah. 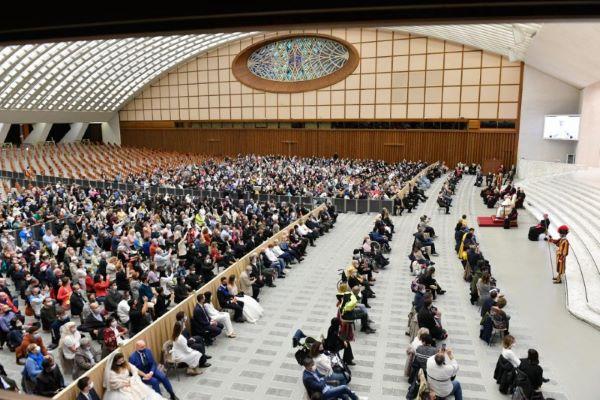 Let us resume today our catechesis on prayer, which we have interrupted for the catechesis on the care of creation, and which we will now resume; and let us meet one of the most compelling characters in the whole of Sacred Scripture: the prophet Elijah. He goes beyond the confines of his time, and we can also see his presence in some episodes of the Gospel. He appeared at Jesus' side, together with Moses, at the moment of the Transfiguration (cf. Mt 17:3). Jesus Himself refers to him to give credit to the testimony of John the Baptist (cf. Mt 17:10-13).

In the Bible, Elijah appears suddenly, in a mysterious way, coming from a small village that is completely marginal (cf. 1 Kings 17:1); and in the end he leaves the scene, under the eyes of the disciple Elisha, on a chariot of fire that takes him to heaven (cf. 2 Kings 2:11-12). He is therefore a man without a precise origin, and above all without an end, taken up into heaven: for this reason his return was expected before the coming of the Messiah, as a precursor. In this way the return of Elijah was awaited.

Scripture presents Elijah as a man of crystalline faith: his very name, which may mean “Yahweh is God”, encloses the secret of his mission. He will be like this for the rest of his life: a man of integrity, incapable of petty compromises. His symbol is fire, the image of God's purifying power. He first will undergo a harsh test, and he will remain faithful. He is the example of all people of faith who know temptation and suffering, but do not fail to live up to the ideal for which they were born.

Prayer is the lifeblood that constantly nourishes his existence. For this reason, he is one of those most dear to the monastic tradition, so much so that some have elected him as the spiritual father of the life consecrated to God. Elijah is the man of God, who stands as a defender of the primacy of the Most High. And yet, he too is forced to come to terms with his own frailties. It is difficult to say which experiences were most useful to him: the defeat of the false prophets on Mount Carmel (cf. 1 Kings 18:20-40), or his bewilderment in which he finds that he is “no better than [his] ancestors” (see 1 Kings 19:4). In the soul of those who pray, the sense of their own weakness is more precious than moments of exaltation, when it seems that life is a series of victories and successes. This always happens in prayer: moments of prayer that we feel lift us up, even of enthusiasm, and moments of prayer of pain, aridity, trial. This is what prayer is: letting ourselves be carried by God, and also letting ourselves be struck by unpleasant situations and even temptations. This is a reality found in many other biblical vocations, even in the New Testament; think, for example, of St Peter and St Paul. Their lives were like this too: moments of exultation and moments of low spirits, of suffering.

Elijah is the man of contemplative life and, at the same time, of active life, preoccupied with the events of his time, capable of clashing with the king and queen after they had Nabot killed to take possession of his vineyard (cf. 1 Kings 21:1-24). How much we are in need of believers, of zealous Christians, who act before people who have managerial responsibility with the courage of Elijah, to say, “This must not be done! This is murder!”. We need Elijah’s spirit. He shows us that there should be no dichotomy in the life of those who pray: one stands before the Lord and goes towards the brothers to whom He sends us. Prayer is not about locking oneself up with the Lord to make one’s soul appear beautiful: no, this is not prayer, this is false prayer. Prayer is a confrontation with God, and letting oneself be sent to serve one’s brothers and sisters. The proof of prayer is the real love of one’s neighbour. And vice versa: believers act in the world after having first kept silent and prayed; otherwise, their action is impulsive, it is devoid of discernment, it is rushing without a destination. Believers behave in this way, they do so many injustices because they did not go to pray to the Lord first, to discern what they must do.

The pages of the Bible suggest that Elijah's faith also made progress: he too grew in prayer, he refined it little by little. The face of God came into focus for him as he walked. He reached his peak in that extraordinary experience, when God manifested Himself to Elijah on the mount (cf. 1 Kings 19:9-13). He manifests himself not in the storm, not in the earthquake or the devouring fire, but in “a light murmuring sound” (v. 12). Or better, a translation that reflects that experience well: in a thread of resounding silence. This is how God manifests Himself to Elijah. It is with this humble sign that God communicates with Elijah, who at that moment is a fugitive prophet who has lost peace. God comes forward to meet a tired man, a man who thought he had failed on all fronts, and with that gentle breeze, with that thread of resounding silence, He brings calm and peace back into the heart.

This is the story of Elijah, but it seems written for all of us. In some evenings we can feel useless and lonely. It is then that prayer will come and knock on the door of our hearts. We can all gather a corner of Elijah's cloak, just as his disciple Elisha collected half his cloak. And even if we have done something wrong, or if we feel threatened and frightened, when we return before God with prayer, serenity and peace will return as if by miracle. This is what the example of Elijah shows us.