"Youth, family, and poverty are challenges for today's Christians"

Yesterday at the Pontifical University of the Holy Cross, the new Prelate of Opus Dei, Monsignor Fernando Ocáriz, answered questions from journalists about the challenges the Church faces and the upcoming General Congress of Opus Dei.

The new Prelate of Opus Dei, Monsignor Fernando Ocáriz, met with the media yesterday afternoon following his election. He said that he felt "calm and at peace" with his appointment as Prelate, convinced that "if God has willed it, He will give me the help I need to carry it out, with the prayer of the Prelature's faithful and of so many friends."

"If God has willed it, He will give me the help I need to carry it out."

He gave thanks to God, to the electors, and to Pope Francis for the "confidence" they have shown in him. "When I stop and think about the treasures passed on to us by Saint Josemaría, Blessed Alvaro and the most recent Prelate, all of whom were of such great human and supernatural stature, I feel very unworthy. I trust in the prayer of so many people and I am sure that God will help me."

Speaking about Opus Dei's apostolic work over the next few years, the Prelate said that "we face the same challenges as all of today's Christians." He specifically referred to the youth, family, the fight against poverty, and care for the sick. "In the Prelature, a wide-ranging effort is being made to help families," he said. "Pope Francis continually insists on pastoral care for the family, as we've seen with the Synod and the apostolic letter Amoris Laetitia. We want to follow his exhortations."

"We shouldn't be people who look for confrontation, which leads nowhere and can even be uncharitable."

Monsignor Ocáriz pointed out that the timing of his appointment coincides with the week the Church traditionally dedicates to praying for Christian unity. "This brings to mind something Pope Francis often says: we need to build bridges. We shouldn't be people who look for confrontation, which leads nowhere and can even be uncharitable. I am not talking about 'irenicism': it is possible to be friends and have different ideas. The bridge of friendship can also lead to a communion of ideas." 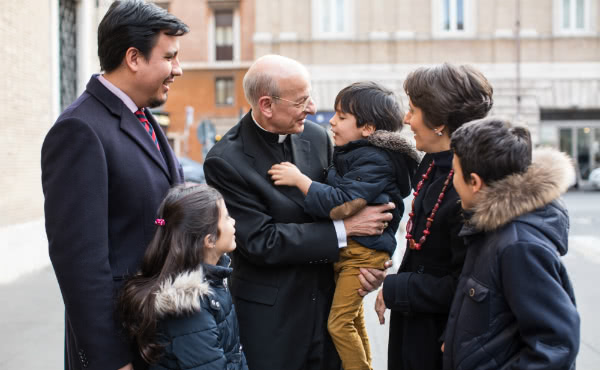 Monsignor Mariano Fazio accompanied the new Prelate at the press conference. On Monday afternoon, he was the one who communicated the decision of the elective congress to the Holy Father. As Monsignor Fazio related: "Pope Francis signed the appointment immediately. He said it was an important moment for Opus Dei, because it would be the first time that someone who had not worked closely with Saint Josemaria would be guiding it. He asked us to be very faithful to the Founder's spirit, and to courageously confront the challenges of the future." Pope Francis sent the new Prelate a medallion of our Lady as a gift.

The Prelate's solemn entrance in the prelatic church of Our Lady of Peace and celebration of Mass will take place on Friday, January 27th.