Reflections on scene of the “Pietà,” in texts from the Magisterium, saints and Christian poets.

In the arms of his Mother they have placed the lifeless body of the Son. The Gospels say nothing of what she felt at that moment. It is as though by their silence the Evangelists wished to respect her sorrow, her feelings and her memories. Or that they simply felt incapable of expressing them. 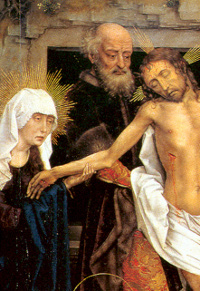 It is only the devotion of the centuries that has preserved the figure of the “Pietà", providing Christian memory with the most sorrowful image of the ineffable bond of love which blossomed in the Mother's heart on the day of the Annunciation and ripened as she waited for the birth of her divine Son.

That love was revealed in the cave at Bethlehem and was tested already during the Presentation in the Temple. It grew deeper as Mary stored and pondered in her heart all that was happening (cf. Lk 2:51). Now this intimate bond of love must be transformed into a union which transcends the boundary between life and death.

And thus it will be across the span of the centuries: people pause at Michelangelo's statue of the Pietà, they kneel before the image of the loving and sorrowful Mother (Smetna Dobrodziejka) in the Church of the Franciscans in Kraków, before the Mother of the Seven Sorrows, Patroness of Slovakia, they venerate Our Lady of Sorrows in countless shrines in every part of the world. And so they learn the difficult love which does not flee from suffering, but surrenders trustingly to the tenderness of God, for whom nothing is impossible (cf. Lk 1:37).

“He was crucified, died and was buried..." The lifeless body of Christ has been laid in the tomb. But the stone of the tomb is not the final seal on his work. The last word belongs not to falsehood, hatred and violence. The last word will be spoken by Love, which is stronger than death.

“Unless a grain of wheat falls into the earth and dies, it remains alone; but if it dies, it bears much fruit" (Jn 12:24). The tomb is the last stage of Christ's dying through the whole course of his earthly life; it is the sign of his supreme sacrifice for us and for our salvation. Very soon this tomb will become the first proclamation of praise and exaltation of the Son of God in the glory of the Father.

“He was crucified, died and was buried . . . on the third day he rose from the dead". Once the lifeless body of Jesus is laid in the tomb, at the foot of Golgotha, the Church begins the vigil of Holy Saturday.

In the depths of her heart, Mary stores and ponders the Passion of her Son;

the women agree to meet on the morning of the day after the Sabbath, in order to anoint Christ's body with aromatic ointments; the disciples gather in the seclusion of the Upper Room, waiting for the Sabbath to pass. 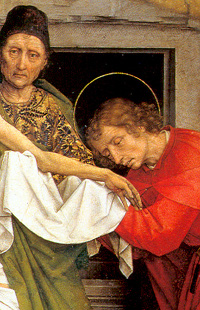 This vigil will end with the meeting at the tomb, the empty tomb of the Saviour. Then the tomb, the silent witness of the Resurrection, will speak. The stone rolled back, the inner chamber empty, the cloths on the ground, this will be what John sees when he comes to the tomb with Peter: “He saw and he believed" (Jn 20:8). And with him the Church believed, and from that moment she never grows weary of communicating to the world this fundamental truth of her faith: “Christ has been raised from the dead, the first fruits of those who have fallen asleep" (1 Cor 15:20).

VOICE OF THE SAINTS AND SPIRITUAL WRITERS

O uncovered corpse, yet Word of the Living One, self-doomed to be uplifted on the cross for the drawing of all men unto Thee, - what member of Thine hath no wound? O thy blessed brows, embraced by the thorn-wreath which is pricking at my heart! O beautiful and priestly One, who hadst not where to lay Thine head and rest, and now wilt lay it only in the tomb, resting there; sleeping, as Jacob said, a lion's sleep! O cheeks turned to the smiter! O lips, new hive for bees, yet fresh from the sharpness of vinegar and bitterness of gall! O mouth, wherein was no guile, yet betrayed by the traitor's kiss! O hand, creative of man, yet nailed to the cross, and since stretched out unto Hades, with help for the first transgressor! O feet, once walking on the deep to hallow the waters of nature! O my son! . . .

Where is thy chorus of sick ones? - those whom Thou didst cure of their diseases, and bring back from the dead? Is none here, but only Nicodemus, to draw the nails from those hands and feet? - none here, but only Nicodemus, to lift Thee from the cross heavily, heavily, and lay Thee in these mother-arms, which bore Thee long ago, in thy babyhood, and were glad then? These hands, which swaddled Thee then, let them bind Thy grave-clothes now. And yet, - O bitter funerals! - O Giver of life from the dead, liest Thou dead before mine eyes? Must I, who said "hush" beside Thy cradle, wail this passion upon Thy grave? I, who washed Thee in Thy first bath, must I drop on Thee these hotter tears? I, who raised Thee high in my maternal arms, - but then Thou leapedst, then Thou sprangest up in Thy child-play!

LIke a king who returns victorious from his battle, he was received in the loving arms of his mother. She was the reception that this King deserved. Not all the world could have given better acclaim and honor than this mother gave her Son, the victor over sin and death....

Jesus, when he spoke to her from the cross, did not call her 'mother"; he called her "Woman," to give more solemnity to the establishing of her new and universal motherhood. But now, Mother, when you received Jesus in your arms, when it was just you and he, and you were feeling that tenderness and pain, were you able to restrain the force of your love and not call him"Son"?

"My Son," you surely said, "who has done this to you? I cannot complain about those who took your life, because you offered it for them. This was what you yearned for, this was your desire, and now it is fulfilled. You have died as a hero, as the Son that you are. Son of the eternal Father! How incomprehensible is his justice, and how great his mercy! He has been merciful to us human beings, and has willed that his Son die for us. Although I cannot understand it, I love his justice because it comes from him! If you, my Son, have loved the will of your Father, I too have loved it, I have suffered and loved with you, Jesus. Accept, O God, the sacrifice of this mother; take pity on sinners, because your Son has died for them. I reaffirm and renew the offering I made to you that day. Behold your maidservant, let it be done to me according to your will."

With her Son in her arms, the Virgin Mary felt the suffering that he had endured for us. With all her love she expressed to the Holy Spirit that same desire that every person be redeemed and saved. As her Son was mediator and Redeemer, she was, in a unique and subsidiary way, made an intermediary and advocate for sinners, and a co-redeemer.

Jesus came into the world with nothing; so too, with nothing—not even the place where he rests—he has left us. 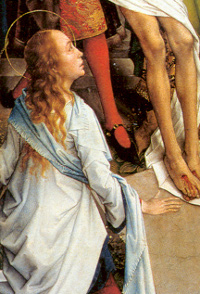 The Mother of our Lord—my Mother—and the women who have followed the Master from Galilee, after taking careful note of every thing, also take their leave. Night falls.

Now it is all over. The work of our Redemption has been accomplished. We are now children of God, because Jesus has died for us and his death has ransomed us.

We must bring into our life, to make them our own, the life and death of Christ. We must die through mortification and penance, so that Christ may live in us through Love. And then follow in the footsteps of Christ, with a zeal to co-redeem all mankind.

We must give our life for others. That is the only way to live the life of Jesus Christ and to become one and the same with Him.

St. Josemaria, "The Way of the Cross," 14th Station

Mary at the Cross

O wondrous mother! Since the dawn of time
Was ever joy, was ever grief like thine?
O, highly favored in thy joy's deep flow,
And favored e'en in this, thy bitterest woe!

Poor was that home in simple ,
Where thou, fair growing, like some silent flower,
Last of a kingly line,—unknown and lowly,
O desert lily,—passed thy childhood's hour.

The world knew not the tender, serious maiden,
Who, through deep loving years so silent grew,
Filled with high thoughts and holy aspirations,
Which, save thy Father, God's, no eye might view.

And then it came, that message from the Highest,
Such as to woman ne'er before descended;
Th' almighty shadowing wings thy soul o'erspread,
And with thy life the Life of worlds was blended.

What visions, then, of future glory filled thee,
Mother of King and kingdom yet unknown—
Mother, fulfiller of all prophecy,
Which through dim ages wondering seers had shown!

Well did thy dark eye kindle, thy deep soul
Rise into billows, and thy heart rejoice;
Then woke the poet's fire, the prophet's song
Tuned with strange, burning words thy timid voice.

Then in dark contrast came the lowly manger,
The outcast shed, the tramp of brutal feet;
Again, behold earth's learned, and her lowly,
Sages and shepherds, prostrate at thy feet.

Then to the temple bearing, hark! again
What strange, conflicting tones of prophecy
Breathe o'er the Child, foreshadowing words of joy,
High triumph, and yet bitter agony.

O, highly favored thou, in many an hour
Spent in lone musing with thy wondrous Son,
When thou didst gaze into that glorious eye,
And hold that mighty hand within thy own.

Blessed through those thirty years, when in thy dwelling
He lived a God disguised, with unknown power,
And thou, his sole adorer,—his best love,—
Trusting, revering, waitedst for his hour.

Blessed in that hour, when called by opening heaven
With cloud, and voice, and the baptizing flame,
Up from the walked th' acknowledged stranger,
And awe-struck crowds grew silent as he came.

Blessed, when full of grace, with glory crowned,
He from both hands almighty favors poured,
And, though he had not where to lay his head,
Brought to his feet alike the slave and lord.

Now by that cross thou tak'st thy final station,
And shar'st the last dark trial of thy Son;
Not with weak tears or woman's lamentation,
But with high, silent anguish, like his own.

Hail, highly favored, even in this deep passion,
Hail, in this bitter anguish—thou art blest—
Blest in the holy power with him to suffer
Those deep death pangs that lead to higher rest.

All now is darkness; and in that deep stillness
The God-man wrestles with that mighty woe;
Hark to that cry, the rock of ages rending—
"'Tis finished!" Mother, all is glory now!

By sufferings mighty as his mighty soul
Hath the Redeemer risen—forever blest;
And through all ages must his heart-beloved
Through the same baptism enter the same rest. 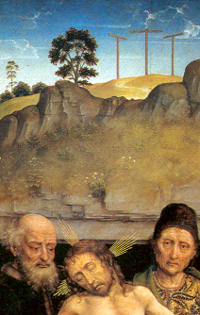