The birth of the Virgin Mary as seen in texts from the Magisterium, the saints and Catholic poets.

The Sacred Scriptures of both the Old and the New Testament, as well as ancient Tradition show the role of the Mother of the Saviour in the economy of salvation in an ever clearer light and draw attention to it. The books of the Old Testament describe the history of salvation, by which the coming of Christ into the world was slowly prepared.

These earliest documents, as they are read in the Church and are understood in the light of a further and full revelation, bring the figure of the woman, Mother of the Redeemer, into a gradually clearer light. When it is looked at in this way, she is already prophetically foreshadowed in the promise of victory over the serpent which was given to our first parents after their fall into sin (cf. Gen 3:15).

Likewise she is the Virgin who shall conceive and bear a son, whose name will be called Emmanuel (cf. Is 7:14; Mi 5:2-3; Mt 1:22-23). She stands out among the poor and humble of the Lord, who confidently hope for and receive salvation from Him. With her the exalted Daughter of Sion, and after a long expectation of the promise, the times are fulfilled and the new Economy established, when the Son of God took a human nature from her, that He might in the mysteries of His flesh free man from sin. 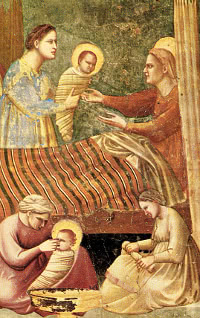 The circumstance which now moves me to take up this subject once more is the prospect of the year 2000, now drawing near, in which the Bimillennial Jubilee of the birth of Jesus Christ at the same time directs our gaze towards his Mother. In recent years, various opinions have been voiced suggesting that it would be fitting to precede that anniversary by a similar Jubilee in celebration of the birth of Mary.

In fact, even though it is not possible to establish an exact chronological point for identifying the date of Mary's birth, the Church has constantly been aware that Mary appeared on the horizon of salvation history before Christ. It is a fact that when "the fullness of time" was definitively drawing near – the saving advent of Emmanuel – he who was from eternity destined to be his Mother already existed on earth. The fact that she "preceded" the coming of Christ is reflected every year in the liturgy of Advent. Therefore, if to that ancient historical expectation of the Savior we compare these years which are bringing us closer to the end of the second Millennium after Christ and to the beginning of the third, it becomes fully comprehensible that in this present period we wish to turn in a special way to her, the one who in the "night" of the Advent expectation began to shine like a true "Morning Star" (Stella Matutina). For just as this star, together with the "dawn," precedes the rising of the sun, so Mary from the time of her Immaculate Conception preceded the coming of the Savior, the rising of the "Sun of Justice" in the history of the human race.

Her presence in the midst of Israel – a presence so discreet as to pass almost unnoticed by the eyes of her contemporaries – shone very clearly before the Eternal One, who had associated this hidden "daughter of Sion" (cf. Zeph 3:14; Zeph 2:10) with the plan of salvation embracing the whole history of humanity.

VOICE OF THE SAINTS Virgo Purissima

BY the Immaculate Conception of the Blessed Virgin is meant the great revealed truth that she was conceived in the womb of her mother, St. Anne, without original sin. 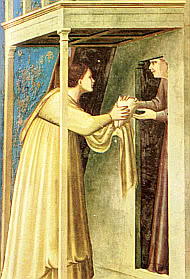 Since the fall of Adam all mankind, his descendants, are conceived and born in sin. "Behold," says the inspired writer in the Psalm Miserere –"Behold, I was conceived in iniquity, and in sin did my mother conceive me." That sin which belongs to every one of us, and is ours from the first moment of our existence, is the sin of unbelief and disobedience, by which Adam lost Paradise. We, as the children of Adam, are heirs to the consequences of his sin, and have forfeited in him that spiritual robe of grace and holiness which he had given him by his Creator at the time that he was made. In this state of forfeiture and disinheritance we are all of us conceived and born; and the ordinary way by which we are taken out of it is the Sacrament of Baptism.

But Mary never was in this state; she was by the eternal decree of God exempted from it. From eternity, God, the Father, Son, and Holy Ghost, decreed to create the race of man, and, foreseeing the fall of Adam, decreed to redeem the whole race by the Son's taking flesh and suffering on the Cross. In that same incomprehensible, eternal instant, in which the Son of God was born of the Father, was also the decree passed of man's redemption through Him. He who was born from Eternity was born by an eternal decree to save us in Time, and to redeem the whole race; and Mary's redemption was determined in that special manner which we call the Immaculate Conception. It was decreed, not that she should be cleansed from sin, but that she should, from the first moment of her being, be preserved from sin; so that the Evil One never had any part in her. Therefore she was a child of Adam and Eve as if they had never fallen; she did not share with them their sin; she inherited the gifts and graces (and more than those) which Adam and Eve possessed in Paradise. This is her prerogative, and the foundation of all those salutary truths which are revealed to us concerning her. Let us say then with all holy souls, Virgin most pure, conceived without original sin, Mary, pray for us.

Joye in the risinge of our orient starr,
That shall bringe forth the Sunne that lent her light;
Joy in the peace that shall conclude our warr,
And soone rebate the edge of Satan's spight;
Load-starr of all engolfd in worldly waves,
The card and compasse that from shipwracke saves.

The patriark and prophettes were the floures
Which Tyme by course of ages did distill,
And culld into this little cloude the shoures
Whose gracious droppes the world with joy shall fill;
Whose moysture suppleth every soule with grace,
And bringeth life to Adam's dyinge race.

For God, on Earth, she is the royall throne,
The chosen cloth to make His mortall weede;
The quarry to cutt out our Corner-stone,
Soyle full of fruite, yet free from mortall seede;
For heavenly floure she is the Jesse rodd
The childe of man, the parent of God. 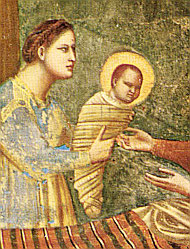