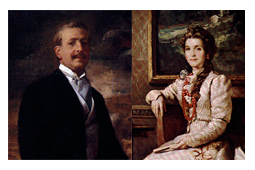 Little Josemaría was only two years old when he got sick, so seriously sick that the doctor expected him to die. Around him, the Escrivá household fell silent. Finally, Doctor Campos, who had done everything possible to save him, told his father:

“He won’t last through the night.”

But José Escrivá and his wife Maria Dolores Albás Escrivá were devout Catholics who prayed to God with great faith for their child’s cure. Dolores promised the Blessed Mother that, if he got well, she would bring him on pilgrimage to the ancient chapel of Torreciudad perched on a sloping cliff in the foothills of the Pyrenees.

The next morning the doctor returned to call on the family. “At what time did the little boy die?” he asked. The boy’s father, unable to contain his joy, replied, “Not only did he not die, but he seems completely recovered!”

Josemaría was born in Barbastro, a small town in upper Aragon, on January 9, 1902. His father, well known in town, was a young textile merchant with strong Christian principles. His mother was entirely devoted to her family and to raising their two children, Carmen and Josemaría. Later, other children would arrive: Asunción (nicknamed Chon), Lolita, Rosario, and years later, Santiago.

“I remember those happy days of my childhood,” Josemaría reminisced: “My mother, my father, my sisters and I always went together to Mass. My father used to give us the alms that we would bring to a disabled man who leaned against the wall of the bishop’s residence. After that, I would run ahead to get holy water to give to my family (He is referring here to the custom of dipping one’s hand in the holy water and then passing it along to friends or relatives who follow behind by dabbing their fingers with it). Then, Holy Mass. Afterwards, every Sunday, in the chapel of the Christ of the Miracles, we used to pray the Creed.” At home, he said prayers that he would never forget: “Even now, I recite every morning and evening the prayers that my mother taught me… When I was six or seven my mother brought me to her confessor, and I was glad to go.” A little later, on April 23, 1912, he made his First Holy Communion on the feast of St. George, as was the custom in that part of Spain. 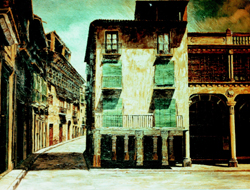 José dedicated a good deal of time to his children. Young Josemaría used to wait impatiently for him to come home and greeted him by putting his hands in his father’s pockets, hoping to find some candy. In winter the father would take his son for a walk, stopping to buy roasted chestnuts from street vendors so Josemaría could amuse himself by warming his hands with them in the pockets of his father’s overcoat.

“When I was a child, two things really bothered me: having to kiss my mother’s friends when they came to visit, and wearing new clothes. When I was dressed up in new clothes, I would hide under the bed and stubbornly refuse to come out. My mother would give a few gentle taps on the floor with one of the canes my father used, and then I would come out — for fear of the cane, not for any other reason.

“Then my mother would say to me affectionately, ‘Josemaría, only be ashamed to sin.’ Many years later it dawned on me what a profound meaning lay in those words.”

So life continued in the household. But soon sorrows arrived. In 1910, Rosario died, only 9 months old. Two years later, Lolita died at the age of 5. A year later, Chon died at the age of 8. Troubled by all this misfortune, Josemaría told his mother, not realizing the pain it would cause her,

“Don’t worry,” she consoled him, “I offered you to our Lady, and she will take care of you.”

Around the same time the career of José Escrivá suffered an abrupt turn due to the unjust actions of one of his partners. The family’s savings were lost, although the parents attempted to keep this from the children. Years later Josemaría found a supernatural explanation for these painful events. “I have always made those I had around me suffer a lot. I didn’t provoke catastrophes. But our Lord, to hit me, the nail — (forgive me, Lord), landed one blow on the nail and a hundred on the horseshoe. I saw my father as the personification of Job. He lost three daughters, one after the other in consecutive years, and then lost his fortune. 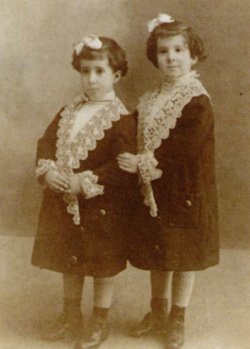 “And life went on. My father reacted heroically, then he fell ill, as I realize now, from undergoing such great misfortunes and worries. He was left with two children and my mother. And he found the strength to bring us forward, not sparing himself any humiliation to provide us with a decent life. He might have remained in a position that was very comfortable for those times, if he had not been a Christian and a gentleman, as they say in my country. I can’t remember a harsh gesture from him. I recall him as always calm, with a cheerful look. He died worn out, when he was only 57. He died exhausted, but he was always smiling.”

Saint Josemaría must certainly have recalled his own family’s experience when, teaching the spirit of Opus Dei, he encouraged Christian parents to make their homes into bright and cheerful ones. Matrimony, he said, is “a divine pathway, a vocation, and this has many consequences for personal holiness and for apostolate.” The first and principal field of sanctification and apostolate is precisely the family. “Christian couples should be aware that they are called to sanctify themselves and to sanctify others, that they are called to be apostles and that their first apostolate is in their home. They should understand that founding a family, educating their children, and exercising a Christian influence in society, is a supernatural task. The effectiveness and the success of their life — their happiness — depend to a great extent on their awareness of their specific mission."