Commentary on the Gospel: "You shall call his name Jesus"

Gospel for the 4th Sunday of Advent (Cycle A), and commentary. 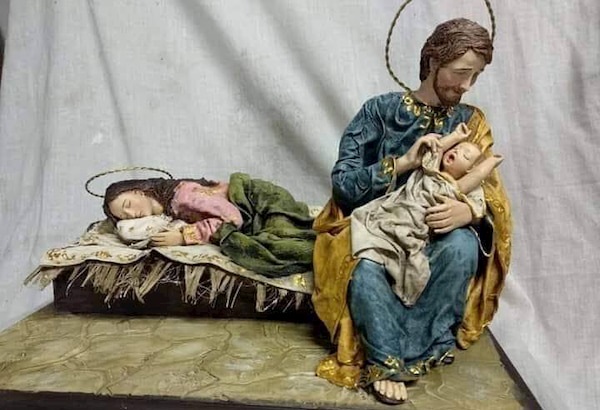 Now the birth of Jesus Christ took place in this way. When his mother Mary had been betrothed to Joseph, before they came together she was found to be with child of the Holy Spirit; and her husband Joseph, being a just man and unwilling to put her to shame, resolved to send her away quietly. But as he considered this, behold, an angel of the Lord appeared to him in a dream, saying,

“Joseph, son of David, do not fear to take Mary your wife, for that which is conceived in her is of the Holy Spirit; she will bear a son, and you shall call his name Jesus, for he will save his people from their sins.” All this took place to fulfil what the Lord had spoken by the prophet:

“Behold, a virgin shall conceive and bear a son,
and his name shall be called Emmanuel” (which means, God with us).

When Joseph woke from sleep, he did as the angel of the Lord commanded him; he took his wife, but knew her not until she had borne a son; and he called his name Jesus.

On the threshold of Christmas, the Gospel for the Fourth Sunday of Advent presents us with the narrative of the birth of Jesus according to Saint Matthew. The first sentence, “Now the birth of Jesus Christ took place in this way,” drew the attention of some Fathers of the Church, who saw it as marking out this birth as special and unique. As Saint John Chrysostom said: “Like someone who is going to say something new, (Matthew) promises to narrate the way this birth was accomplished; he doesn’t want people to think, on hearing the words ‘husband of Mary,’ that Christ had been born according to the general law of nature.”[1] Rather the evangelist stresses that Jesus’ conception took place without the intervention of a man, and that it was therefore virginal and miraculous: by the action of the Holy Spirit. These events were also seen as fulfilling the famous prophecy in Isaiah 7:14 announcing that a virgin would give birth to Emmanuel.

Matthew tell us that when Mary conceives our Lord in her womb, she and Joseph were betrothed: that is, they had made the commitment to marry called qiddûshîn, but had still not celebrated their wedding (nissûîn),when the bride was received into the groom’s home and they began to live together. Nevertheless, the first ceremony already had all the juridical effects of a marriage. It is between these two events that the conception by the work “of the Holy Spirit” took place (v. 20).

According to the Law of Moses, Joseph had to denounce Mary in public and she would be stoned for her apparent adultery (Deut 22:23-24). But instead he decides to send Mary away in secret. This probably meant signing and delivering a document in private that left Mary free from the betrothal that had been celebrated. She could then present it when people found out that she was expecting a child who was not Joseph’s.

This action of Joseph is evidence of his exceptional human stature, because he endeavors to protect Mary and to distance himself from the situation.Therefore he merits the praise of the evangelist, who calls him “just.” As Pope Francis once said: “we need to meditate on these words in order to understand the trial Joseph had to undergo on the days prior to Jesus’ birth. A trial similar to that of Abraham, when God asked him to sacrifice his son Isaac (cf. Gen 22): to renounce his most precious possession, the person he loved most. But, as in the case of Abraham, the Lord intervenes; he finds the faith he is seeking and opens up a different path, a path of love and happiness: ‘Joseph, do not fear to take Mary your wife, for that which is conceived in her is of the Holy Spirit’ (Mt 1:20). This Gospel,” the Pope concludes, “shows us the greatness of Saint Joseph’s soul. His life was set on a good path, but God had reserved for him another plan, a greater mission. Joseph was a man who was always striving to hear God’s voice, to discover his secret will; a man attentive to the messages that reached him from the depths of his heart and from on high.”[2]

After making his difficult decision, Joseph receives in a dream the angelic message to accept Mary and the child as his own son without any fear, because thus his son will be given a name before the Law. With his obedience to the angel, Joseph reminds us of the patriarch who had the same name, and who knew how to interpret God’s will as revealed in dreams (Gen 40: 8ff). The child’s name, Yeshua, which means in Hebrew “God saves,” makes reference to his mission, since “he will save his people from their sins” (v. 21).

The figure of Joseph in this narrative has always stirred up the devotion of the saints towards the spouse of Mary. Saint Josemaria, for example, invited us to consider: “There are many good reasons to honor Saint Joseph, and to learn from his life. He was a man of strong faith. He earned a living for his family—for Jesus and Mary—with his own hard work. He guarded the purity of the Blessed Virgin, who was his Spouse. And he respected—he loved!—God’s freedom, when God made his choice: not only his choice of Our Lady the Virgin as his Mother, but also his choice of Saint Joseph as the Husband of Holy Mary.”[3]