Commentary on the Gospel: The Wedding Garment

Gospel for the 28th Sunday in Ordinary Time (Cycle A), and commentary. 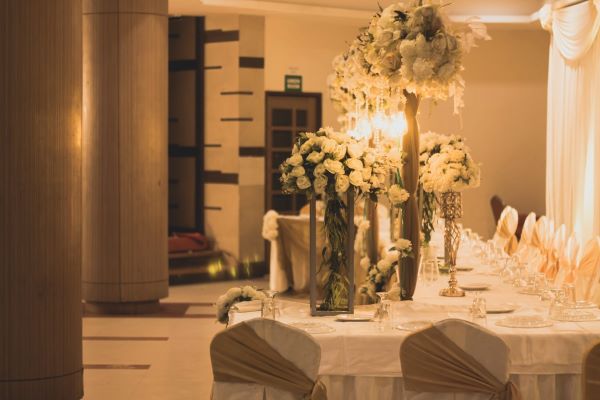 And again Jesus spoke to them in parables, saying, “The kingdom of heaven may be compared to a king who gave a marriage feast for his son, and sent his servants to call those who were invited to the marriage feast; but they would not come. Again he sent other servants, saying, ‘Tell those who are invited, Behold, I have made ready my dinner, my oxen and my fat calves are killed, and everything is ready; come to the marriage feast.’ But they made light of it and went off, one to his farm, another to his business, while the rest seized his servants, treated them shamefully, and killed them. The king was angry, and he sent his troops and destroyed those murderers and burned their city. Then he said to his servants, ‘The wedding is ready, but those invited were not worthy. Go therefore to the thoroughfares, and invite to the marriage feast as many as you find.’ And those servants went out into the streets and gathered all whom they found, both bad and good; so the wedding hall was filled with guests.

“But when the king came in to look at the guests, he saw there a man who had no wedding garment; and he said to him, ‘Friend, how did you get in here without a wedding garment?’ And he was speechless. Then the king said to the attendants, ‘Bind him hand and foot, and cast him into the outer darkness; there men will weep and gnash their teeth.’ For many are called, but few are chosen.”

In this parable Jesus speaks about a king who invites many people to a wedding banquet for his son, but surprisingly none of those invited attend the celebration. They give many different excuses, but the final result is that they don’t go. “God is good to us, he freely offers us his friendship, he offers us his joy and salvation,” the Pope said. “But so often we don’t accept his gifts; we place our practical concerns, our interests first. And when the Lord is calling to us, it so often seems to annoy us.”[1]

God often experiences refusal and rejection on the part of those he offers his gifts to. But his love knows nothing of discouragement. That is why he sends his servants to go out to all the byways and invite everyone they meet, both good and bad people without any distinctions. It is striking that bad persons are also invited. Our Lord excludes no one from his call. The invitation that many had rejected is now offered to people who previously had not been part of his circle of acquaintances, people with no relation to him. Men and women from every background and social condition, even those who do not pray or even know much about God – all are called to holiness, to share in the glory of heaven. No one is excluded. God’s generous invitation to participate in heavenly glory is gratuitous and universal.

But the Gospel continues: “When the king came in to look at the guests, he saw there a man who had no wedding garment” (v. 11). Everyone there had been invited, like all of us are invited, to salvation. The door is open for anyone who wishes to enter, but before enjoying glory there will be a judgment. The supreme judge, who can discern the deepest recesses of our heart, will decide what is of value in each person’s life.

“Jesus announced the judgment of the Last Day in his preaching,” the Catechism of the Catholic Church reminds us. “Then will the conduct of each one and the secrets of hearts be brought to light. Then will the culpable unbelief that counted the offer of God’s grace as nothing be condemned. Our attitude to our neighbor will disclose acceptance or refusal of grace and divine love … Yet the Son did not come to judge, but to save and to give the life he has in himself. By rejecting grace in this life, one already judges oneself, receives according to one’s works, and can even condemn oneself for all eternity by rejecting the Spirit of love.”[2]

Jesus’ parable makes clear that, whatever one’s past actions may have been, the indispensable condition is to wear the wedding garment, that is, to have our soul clean and a repentant heart, to embrace a way of life that gives testimony to love for God and neighbor.

Jesus, who invites everyone to his table, demands respect in approaching it. Thus Saint Paul reminded the Christians at Corinth that before approaching the banquet of the Eucharist, a Sacrament where we receive a foretaste of heavenly glory, they need to examine their conscience carefully: “Let a man examine himself, and so eat of the bread and drink of the cup. For any one who eats and drinks without discerning the Body eats and drinks judgment upon himself” (1 Cor 11:28-29).

Every day is a good day, especially if we feel in some way stained, to clean our soul, to embrace God’s love and enjoy the invitation that Jesus offers us to the heavenly banquet.