Commentary on the Gospel: The Transfiguration

Gospel for the 2nd Sunday of Lent (Cycle A), and commentary. 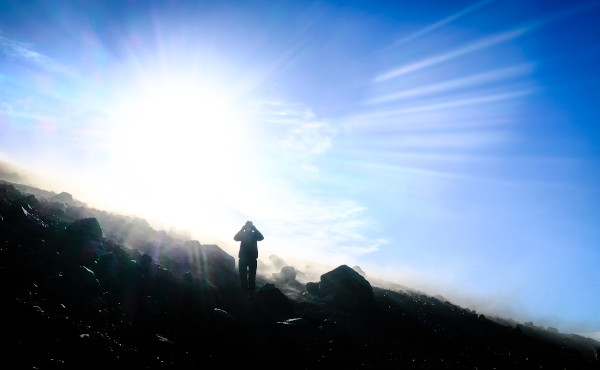 And after six days Jesus took with him Peter and James and John his brother, and led them up a high mountain apart. And he was transfigured before them, and his face shone like the sun, and his garments became white as light. And behold, there appeared to them Moses and Elijah, talking with him. And Peter said to Jesus,

“Lord, it is well that we are here; if you wish, I will make three booths here, one for you and one for Moses and one for Elijah.”

He was still speaking, when lo, a bright cloud overshadowed them, and a voice from the cloud said,

“This is my beloved Son, with whom I am well pleased; listen to him.”

When the disciples heard this, they fell on their faces, and were filled with awe. But Jesus came and touched them, saying, “Rise, and have no fear.” And when they lifted up their eyes, they saw no one but Jesus only.

And as they were coming down the mountain, Jesus commanded them,

“Tell no one the vision, until the Son of man is raised from the dead.”

Matthew’s gospel places this scene at a critical moment for the apostles. Jesus has just made known to them “that he must go to Jerusalem and suffer many things from the elders and chief priests and scribes, and be killed, and on the third day be raised” (Mt 16:21). He has also told them bluntly: “If any man would come after me, let him deny himself and take up his cross and follow me. For whoever would save his life will lose it, and whoever loses his life for my sake will find it” (Mt 16:24-5). We can easily imagine how these strong statements would have left his disciples disconcerted and fearful.

But now He wants to strengthen their hope by manifesting his glory to Peter, James and John. He goes up a high mountain accompanied by three of his disciples, just as Moses climbed Mount Sinai accompanied first by Aaran, Nadab and Abihu, with seventy of the elders of Israel following them (Ex 24:9). These are the same three apostles He will ask to accompany Him more closely in Gethsemani, with the others remaining at a distance from the place where Jesus prayed in agony (cf. Mk 14:33). There is a great contrast between the two scenes, one of joyful splendor and the other of anguished suffering, where Peter, James and John accompany Him, yet the two are also inseparably connected. For there is no glory without the Cross.

Moses and Elijah, who had contemplated God’s glory and received his revelation on the mountain called Horeb or Sinai (cf. Ex 24:15-16 and 1 Kgs 19:8), accompany Jesus on this mountain too when “he was transfigured before them, and his face shone like the sun, and his garments became white as light” (v. 2). Now they contemplate God’s glory and speak with the One who is the revelation of God in person.

Peter cannot restrain his joy and exclaims: “Lord, it is well that we are here; if you wish, I will make three booths here, one for you and one for Moses and one for Elijah” (v. 4). He gives expression to the desire of every human heart to joyfully contemplate God’s glory forever—the happiness to which we have all been called. Saint Josemaria exclaimed: “Jesus: we want to see you, to speak to you! We want to contemplate you, immersed in the immensity of your beauty, in a contemplation that will never cease! Oh my Christ! It must be wonderful to see you! It must be wonderful to see you and be wounded by love for you!"[1]

From the bright cloud that envelops them they hear these deeply significant words: “This is my beloved Son, with whom I am well pleased; listen to him” (v. 5). The expression “my beloved Son” is an echo of God’s words to Abraham when asking him for the sacrifice of his son Isaac: “your only son, whom you love” (Gen 22:2). Thus a parallel is established between the dramatic scene in Genesis where Abraham is ready to sacrifice Isaac, and the drama that culminates on Calvary where God the Father offers his Son in a sacrifice that is freely accepted for the redemption of mankind. The Church has seen in the Transfiguration a preparation for the apostles to help them endure the scandal of the Cross. Moreover, the words “listen to him” are a clear reflection of the Lord’s words to Moses in Deuteronomy, which Moses passed on to the people: “The Lord your God will raise up for you a prophet like me from among your own people; you shall heed such a prophet”(Deut 18:15).

Pope Francis said: “From the event of the Transfiguration I would like to take two significant elements that can be summed up in two words: ascent and descent. We all need to go apart, to ascend the mountain in a space of silence, to find ourselves and better perceive the voice of the Lord. This we do in prayer. But we cannot stay there! Encounter with God in prayer inspires us anew to ‘descend the mountain’ and return to the plain where we meet many brothers weighed down by fatigue, sickness, injustice, ignorance, poverty both material and spiritual. To these brothers in difficulty, we are called to bear the fruit of that experience with God, by sharing the grace we have received.”[2]