Commentary on the Gospel: The Road to Emmaus

Gospel for the 3rd Sunday of Easter (Cycle A), and commentary. 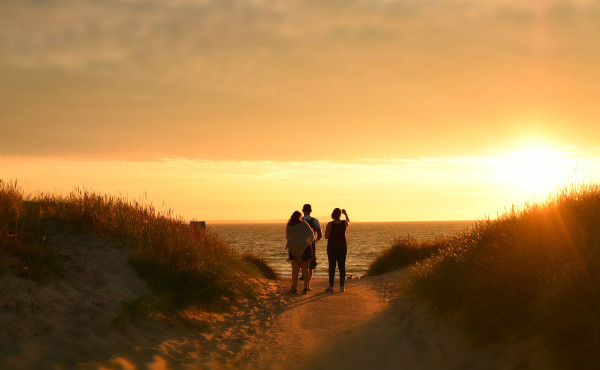 That very day two of them were going to a village named Emmaus, about seven miles from Jerusalem, and talking with each other about all these things that had happened. While they were talking and discussing together, Jesus himself drew near and went with them. But their eyes were kept from recognizing him.

And he said to them, “What is this conversation which you are holding with each other as you walk?”

And they stood still, looking sad. Then one of them, named Cleopas, answered him, “Are you the only visitor to Jerusalem who does not know the things that have happened there in these days?”

And he said to them, “What things?”

And they said to him, “Concerning Jesus of Nazareth, who was a prophet mighty in deed and word before God and all the people, and how our chief priests and rulers delivered him up to be condemned to death, and crucified him. But we had hoped that he was the one to redeem Israel. Yes, and besides all this, it is now the third day since this happened. Moreover, some women of our company amazed us. They were at the tomb early in the morning and did not find his body; and they came back saying that they had even seen a vision of angels, who said that he was alive. Some of those who were with us went to the tomb, and found it just as the women had said; but him they did not see.”

And he said to them, “O foolish men, and slow of heart to believe all that the prophets have spoken! Was it not necessary that the Christ should suffer these things and enter into his glory?”

And beginning with Moses and all the prophets, he interpreted to them in all the scriptures the things concerning himself.

So they drew near to the village to which they were going. He appeared to be going further, but they constrained him, saying, “Stay with us, for it is toward evening and the day is now far spent.”

So he went in to stay with them. When he was at table with them, he took the bread and blessed, and broke it, and gave it to them. And their eyes were opened and they recognized him; and he vanished out of their sight.

They said to each other, “Did not our hearts burn within us while he talked to us on the road, while he opened to us the scriptures?”

And they rose that same hour and returned to Jerusalem; and they found the eleven gathered together and those who were with them, who said, “The Lord has risen indeed, and has appeared to Simon!” Then they told what had happened on the road, and how he was known to them in the breaking of the bread.

Saint Luke recounts that, on the Sunday of the Resurrection two disciples of Jesus were going from Jerusalem to Emmaus. They were weighed down with worries, since they had heard about the angel’s announcement that Jesus was alive (v. 22ff), but still had doubts about the resurrection. So immersed were they in their own sadness that they were unable to recognize the risen Jesus in the person walking alongside them.

The narrative says the Emmaus was about 60 estadia (7 miles) from Jerusalem. Experts still debate the exact location of this village, but tradition often identifies it with Emmaus Nicopolis,[1] which is about 160 estadia (18 miles) from Jerusalem, a figure that is also found in many manuscripts of Luke’s gospel. In any case, the two disciples had a long walk ahead of them that day. And leaving Jerusalem was like leaving behind their faith in Jesus. But the Risen One comes to meet them in order to transform their hearts.

With great tact, Jesus helps them to talk about their worries in order to dissipate them. Saint Josemaria loved to contemplate this scene, applying it to his daily life: “there, without any fuss, Jesus appeared to them, and walks with them, his conversation helping to alleviate their tiredness. I can well imagine the scene, just as dusk was falling. A gentle breeze was blowing. All around were fields ripe with wheat, and venerable olive trees, their branches shimmering in the soft glowing light.

"Jesus joins them as they go along their way. Lord, how great you are, in everything! But you move me even more when you come down to our level, to follow us and to seek us in the hustle and bustle of each day. Lord, grant us a childlike spirit, pure eyes and a clear head so that we may recognize you when you come without any outward sign of your glory.”[2]

The Crucified and Risen Lord comes to meet us on our daily path, to restore joy to our heart when we need it. “The road to Emmaus thus becomes a symbol of our journey of faith: the Scriptures and the Eucharist are the indispensable elements for encountering the Lord. We too often go to Sunday Mass with our worries, difficulties and disappointments.... Life sometimes wounds us and we go away feeling sad, towards our ‘Emmaus,’ turning our backs on God’s plan. We distance ourselves from God. But the Liturgy of the Word welcomes us: Jesus explains the Scriptures to us and rekindles in our hearts the warmth of faith and hope, and in Communion he gives us strength. The Word of God, the Eucharist. Read a passage of the Gospel every day. Remember it well: read a passage from the Gospel every day, and on Sundays go to Communion, to receive Jesus. This is what happened to the disciples of Emmaus: they received the Word; they shared the breaking of bread and from feeling sad and defeated they became joyful. Dear brothers and sisters, the Word of God and the Eucharist always fill us with joy.”[3]

Benedict XVI said in a general audience, citing words of Saint Jerome: “‘Ignorance of the Scriptures is ignorance of Christ.’ It is therefore important that every Christian live in contact and in personal dialogue with the Word of God given to us in Sacred Scripture … The privileged place for reading and listening to the Word of God is the liturgy, in which, celebrating the Word and making Christ’s Body present in the Sacrament, we actualize the Word in our lives and make it present among us.”[4]

[1] “Emmaus, the home town of Cleophas that is mentioned in Luke’s gospel, is Nicopolis, a famous city in Palestine” (Eusebius of Caesarea, Onomasticon 90, 15-17).