Commentary on the Gospel: As Little Children

Gospel for the 25th Sunday in Ordinary Time (Year B), and commentary. 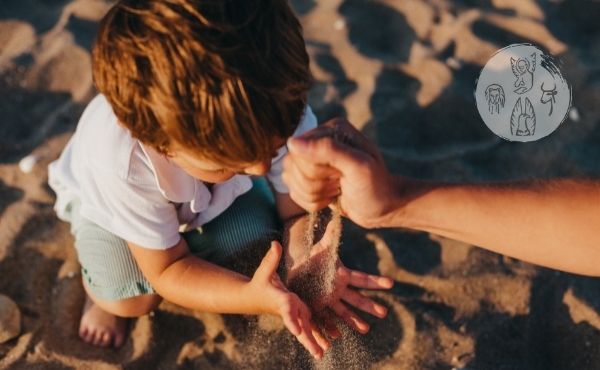 They went on from there and passed through Galilee. And Jesus would not have anyone know it; for he was teaching his disciples, saying to them, “The Son of man will be delivered into the hands of men, and they will kill him; and when he is killed, after three days he will rise.”

But they did not understand the saying, and they were afraid to ask him. And they came to Capernaum; and when he was in the house he asked them, “What were you discussing on the way?”

But they were silent; for on the way they had discussed with one another who was the greatest. And he sat down and called the twelve; and he said to them, “If anyone would be first, he must be last of all and servant of all.”

And he took a child, and put him in the midst of them; and taking him in his arms, he said to them, “Whoever receives one such child in my name receives me; and whoever receives me, receives not me but him who sent me.”

The time is drawing near for the final trip to Jerusalem, where Jesus will bring his mission to completion. It is the decisive moment, and therefore the Master speaks to the Apostles for the second time about what awaits him in a few weeks in the Holy City.

There the dramatic events of his Passion will unfold, which will seemingly end in his death on the Cross, but will also lead to his glorious resurrection. Our Lord’s words are clear. But the Evangelist tells us that “they did not understand the saying, and they were afraid to ask him.” They are reluctant to accept what Jesus is saying. How different is God’s logic, which sees in suffering the path to glory, from a human logic that flees from accepting what we don’t want or find unpleasant!

It is surprising to see what happens in such an important and dramatic moment: “What were you discussing on the way?” Jesus asked them. “But they were silent; for on the way they had discussed with one another who was the greatest” (v. 33), the Evangelists tells us.

While Jesus advances with determination towards the Cross, none of them takes compassion on the suffering the Master will endure or tries to offer their support. Rather they selfishly discuss among themselves their own benefit from following Jesus. How slow they are to understand! They would have justly merited Jesus’ rejection. But despite their clear personal limitations, they did not lose Jesus’ confidence. “What a disappointment for Christ. Nevertheless,” Msgr. Ocariz says, “he entrusted the Church to them, as he does now to us, who also fall into disputes and divisions.”

“What does all this tell us?” Benedict XVI asks. “It reminds us that the logic of God is always ‘other’ than ours, just as God himself revealed through the mouth of Isaiah: ‘For my thoughts are not your thoughts, / neither are your ways my ways’ (Is 55:8). Therefore following our Lord always demands of us—of all of us—a deep conversion, a change in our way of thinking and living. It demands that our heart be opened to listening, to letting ourselves be illuminated and transformed from within” (Angelus, 23 September 2012).

Jesus has patience with the defects of those men, and he explains to them his “logic,” the logic of a love that becomes service to the point of total self-giving: “if anyone would be first, he must be last of all and servant of all” (v. 35). And to engrave this teaching on their hearts, “he took a child, and put him in the midst of them; and taking him in his arms, he said to them, ‘Whoever receives one such child in my name receives me; and whoever receives me, receives not me but him who sent me’” (vv. 36-37).

“Doesn’t this way Jesus has of doing things move us to love him?” Saint Josemaria asks. “He teaches them the doctrine and then, to enable them to understand it, he gives them a living example. He calls a little child, one of the children running around the house, and he lovingly embraces him. How eloquent Our Lord's silence is! With it he has already said everything. He loves those who become as little children. He then adds that the reward for this simplicity, for this humility of spirit, is the joy of being able to embrace him and his Father who is in heaven.”

God, who is truly great, who is the fulness of all perfection, has no hesitation in lowering himself to the last place. Jesus identifies himself with the child. He himself has become small. In contrast, we aspire to be first because we are proud. Following Christ is difficult, but only the person who becomes small will do great things.