Commentary on the Gospel: "He loved them to the end"

Gospel for the Mass "In coena Domini" on Holy Thursday (Cycles ABC), and commentary. 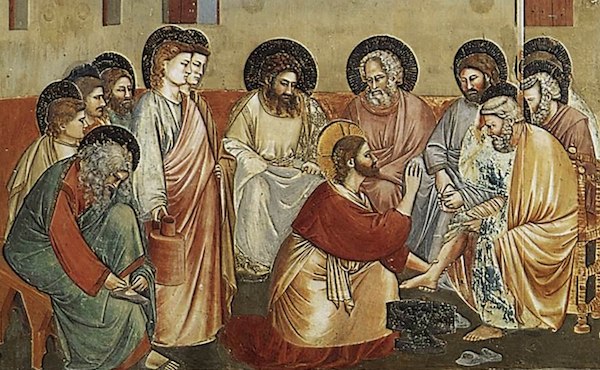 Now before the feast of the Passover, when Jesus knew that his hour had come to depart out of this world to the Father, having loved his own who were in the world, he loved them to the end. And during supper, when the devil had already put it into the heart of Judas Iscariot, Simon’s son, to betray him, Jesus, knowing that the Father had given all things into his hands, and that he had come from God and was going to God, rose from supper, laid aside his garments, and girded himself with a towel. Then he poured water into a basin, and began to wash the disciples’ feet, and to wipe them with the towel with which he was girded.

He came to Simon Peter; and Peter said to him, “Lord, do you wash my feet?”

Jesus answered him, “What I am doing you do not know now, but afterward you will understand.”

Peter said to him, “You shall never wash my feet.”

Jesus answered him, “If I do not wash you, you have no part in me.”

Simon Peter said to him, “Lord, not my feet only but also my hands and my head!”

Jesus said to him, “He who has bathed does not need to wash, except for his feet, but he is clean all over; and you are clean, but not all of you.” For he knew who was to betray him; that was why he said, “You are not all clean.”

When he had washed their feet, and taken his garments, and resumed his place, he said to them,

“Do you know what I have done to you? You call me Teacher and Lord; and you are right, for so I am. If I then, your Lord and Teacher, have washed your feet, you also ought to wash one another’s feet. For I have given you an example, that you also should do as I have done to you.”

John begins his narrative with a phrase that has a double meaning, striking for its simplicity and depth: “he loved them to the end.” It refers to the reality that Christ's love lasts forever, but also to the fact that he will go to the ultimate extreme, giving up his own life for the others: “Greater love has no man than this, that a man lay down his life for his friends” (Jn 15:13).

In the rabbinical schools the master was seen as being worthy of receiving even greater honor than that owed to one’s own father. Hence the students, besides pursuing their studies, had the obligation of rendering him certain personal services such as carrying his sandals, clearing the way for him (although normally they had to walk behind him), or guiding the donkey on which he rode. Rabbi Joshua ben Levi, in the third century after Christ, says that the disciple must provide the master with the same services that a slave gives to his owner, the only exception being that he need not untie his sandals.[1]

In this context, Jesus’ example is very significant. He shares daily life with his Apostles and often eats with them, but he is ready to serve them to the point that he “rose from supper, laid aside his garments, and girded himself with a towel. Then he poured water into a basin, and began to wash the disciples’ feet, and to wipe them with the towel with which he was girded” (Jn 13:4-5). By washing their feet, Jesus humbles himself and carries out a task assigned to slaves, as Saint Paul says in the Letter to the Philippians: Christ Jesus “though he was in the form of God … emptied himself, taking the form of a servant”(Phil 2:6-7). By that gesture, Jesus shows in a natural way that he has come “not to be served but to serve … to give his life as a ransom for many” (Mk 10:45).

Saint Josemaría, in contemplating this scene, said: “Our Lord’s tactfulness moves me deeply. He puts himself at their level, and he lovingly chides those men for their lack of generosity. As he did with the first twelve, so also with us our Lord can and does whisper in our ear, time and again, exemplum dedi vobis (Jn 13:15), I have given you an example of humility. I have become a slave, so that you too may learn to serve all men with a meek and humble heart.”[2]

This impressive incident that highlights for us the example of Jesus’ humility and readiness to serve, also has a deeper theological meaning. The washing of the Apostles’ feet is a symbol of the redemptive meaning of Christ’s death, which we commemorate in the Paschal Triduum. To enter into communion with God, we first need to be “clean,” but the closer one draws to God, the more unclean one feels and in need of purification. It is Jesus who has come to purify us, to give us the means to conquer sin and death, by offering his life on the Cross. At the Last Supper, what will be carried out on Calvary hours later is anticipated sacramentally.