Commentary on the Gospel: Christ the King

Gospel for the 34th Sunday in Ordinary Time (Cycle C), and commentary. 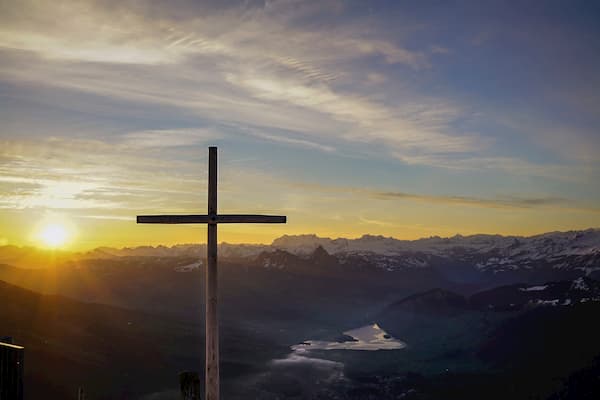 And the people stood by, watching; but the rulers scoffed at him, saying, “He saved others; let him save himself, if he is the Christ of God, his Chosen One!” The soldiers also mocked him, coming up and offering him vinegar, and saying, “If you are the King of the Jews, save yourself!” There was also an inscription over him, “This is the King of the Jews.”

One of the criminals who were hanged railed at him, saying, “Are you not the Christ? Save yourself and us!” But the other rebuked him, saying, “Do you not fear God, since you are under the same sentence of condemnation? And we indeed justly; for we are receiving the due reward of our deeds; but this man has done nothing wrong.” And he said, “Jesus, remember me when you come in your kingly power.” And he said to him, “Truly, I say to you, today you will be with me in Paradise.”

The Solemnity of Christ the King closes the liturgical year that began with Advent time. And for the Gospel of the Mass, the Church presents us with the scene of Christ’s agony on the Cross, amid derision on the part of the bystanders and with the inscription declaring him ironically as king of the Jews.

Christ’s kingdom is mysterious and hidden in this scene. Pope Francis remarked that this Gospel presents Jesus’ royalty in a surprising way “The Christ of God, the Chosen One, the King” (Lk: 23:35, 37) appears without power or glory; he is on the Cross, where he seems more to be conquered than conqueror. His kingship is paradoxical.” And the Pope concluded: “For the grandeur of his kingdom is not power as defined by this world, but the love of God, a love capable of encountering and healing all things. Christ lowered himself to us out of this love; he lived our human misery, and he suffered to the lowest point of our human condition: injustice, betrayal, abandonment; he experienced death, the tomb, hell. And so our King went to the ends of the universe to embrace and save every living being.”[1]

Saint Luke is perhaps the Evangelist who has most clearly emphasized this merciful love of Jesus during his Passion; a love capable of bearing everything to save us. He records, for example, Jesus’ prayer to the Father for his executioners (v. 34); and he narrates one of the most characteristic episodes of his gospel: the conversion of the good thief, who appears in this scene as the first-fruit of Christ’s victory and of his mysterious kingdom.

In this episode the good thief exhibits the virtues needed to receive a place in God’s kingdom. As Saint Gregory the Great said, “he had faith, because he believed that he would reign with God, whom he saw dying at his side; he had hope, because he asked to enter into his kingdom; and he had charity, because he severely reproached his robber companion, who was dying at the same time as he, and for the same crime.”[2] That man suffered the same torments as Jesus. But instead of joining in the mockery of the others and reproaching him for his apparent passivity before injustice, he recognizes in the Nazarene, his companion in suffering, the Son of God.

The good thief shows a fundamental disposition demanded of the other thief: “Do you not fear God, since you are under the same sentence of condemnation?” (v. 40). The fear of God means here assuming with responsibility and sincerity the consequences of one’s own actions, without blaming God for them: “we are receiving the due reward of our deeds; but this man has done nothing wrong.”

The fear of God moves the good thief to acknowledge and confess his guilt. Thus he advances, through contrition, from fear to love: “remember me when you come in your kingly power” (v. 43). And he receives not only God’s forgiveness but also the promise of Paradise. As Saint Ambrose said, “Our Lord always grants more than what he is asked for: the thief only asked that he remember him, but our Lord replied: ‘Truly, I say to you, today you will be with me in Paradise.’ Life consists in dwelling with Christ, and where Christ is there is his Kingdom.”[3]

Saint Josemaría remarked in regard to this scene: “I have often repeated that verse of the Eucharistic hymn, Peto quod petivit latro poenitens, and it always fills me with emotion: to ask like the penitent thief did! He recognized that he himself deserved that awful punishment. And with a word he stole Christ’s heart and ‘opened up’ for himself the gates of heaven.”[4]