"Diligence is a virtue that especially characterized Dora," recalls Ma. Carmen Cominges, "She really knew how to maximize her time. It was typical to hear her say, 'As I have a few minutes to spare, I'm going to take advantage of them.'" 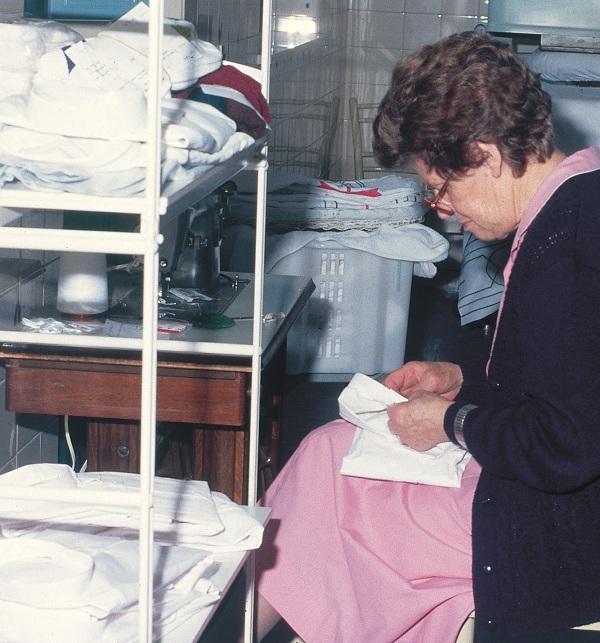 Mª Carmen Cominges met Dora del Hoyo in Rome in June of 1975. What follows are a few of her memories of Dora, with whom she worked for almost thirty years.

Diligence is a virtue that especially characterized Dora. She really knew how to maximize her use of time. It was typical to hear her say, "As I have a few minutes to spare, I'm going to take advantage of them to do this or that other thing." She was heroic in this aspect to the end, and she always asked to be given more work to do. When she started losing some of her physical faculties - her vision, for example -, she would devote herself to more simple tasks, such as pairing socks or attending the telephone.

She loved people humanly and supernaturally. She would give them her time, professionally forming them and teaching them while passing on all her experiences. Sometimes she would get angry and scold a bit: this usually happened if someone was careless or had left something undone in their work. But her anger never lasted long, and no one was left feeling badly or wounded because of her. I don't recall anyone ever being offended by her, or that she held any grudges.

She loved the Pope a lot - all of them, whoever they were - and she would pray for him and for the Bishops. I remember her emotion upon getting to attend a Mass celebrated by the newly elected John Paul II, in which she got to receive communion from his hands, in December of 1978.

Not calling attention to herself, she sought to pass unnoticed, and on one occasion St. Josemaria even pointed this out to us. It was 24 March 1974. On this day, the Founder of Opus Dei came for the first time to visit Albarosa, a center of Opus Dei that had just been opened in Grottarossa, close to Rome, and where Dora, myself, and others were now living there to take care of the domestic aspects of the house. All of us were gathered around St. Josemaria, and at a certain point, he noticed that Dora was not there. He asked us, "Where is this daughter of mine who always passes unnoticed?" She had stepped out for a second, and the Founder of Opus Dei took advantage of her absence to praise her, with a lot of affection.