"The precious treasure, the beauty of the newness of Christ"

Pope Francis continued to explain the meaning of Saint Paul's Letter to the Galatians in his 1 September general audience. 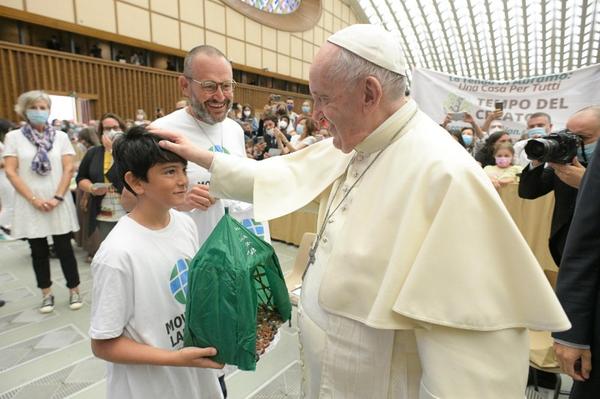 We will continue the explanation of the Letter of Saint Paul to the Galatians. This is not something new, this explanation, it is something mine: what we are studying is what Saint Paul says in a very serious conflict with the Galatians. And it is also the Word of God, because it entered the Bible. They are not things that someone makes up: no. It is something that happened in that time and which can repeat itself. This is simply a catechesis on the Word of God expressed in the Letter of Saint Paul to the Galatians; nothing else. This must always be kept in mind. And in the previous catechesis we saw how the apostle Paul shows the first Christians of Galatia how dangerous it is to leave the path they have started to travel by welcoming the Gospel. Indeed, the risk is that of giving in to formalism, which is one of the temptations that leads to hypocrisy, which we spoke about the other time. Giving in to formalism, and denying the new dignity they have received: the dignity of those redeemed by Christ. The passage we have just heard is the beginning of the second part of the Letter. So far, Paul has spoken of his life and his vocation: of how God's grace has transformed his existence, placing it completely at the service of evangelisation. At this point, he directly challenges the Galatians: he places before them the choices they have made and their current condition, which could nullify the experience of grace they have lived.

And the terms the Apostle uses to address the Galatians are certainly not courteous: we have heard. In the other Letters it is easy to find the expressions such as “Brothers” or “dear friends”; here no, because he is angry. He says “Galatians” generically and on no less than two occasions calls them “foolish”, which is not a polite term. Foolish, senseless, may mean many things… He does so not because they are not intelligent, but because, almost without realizing it, they risk losing the faith in Christ that they have received with so much enthusiasm. They are foolish because they are unaware that the danger is that of losing the valuable treasure, the beauty, of the newness of Christ. The Apostle’s wonder and sadness are clear. Not without bitterness, he provokes those Christians into remembering his first proclamation, with which he offered them the possibility of attaining a new, hitherto unhoped-for freedom.

The Apostle poses questions to the Galatians, with the intention of shaking up their consciences: this is why it is so forceful. They are rhetorical questions, because the Galatians are well aware that their coming to faith in Christ is the fruit of the grace received through the preaching of the Gospel. He takes them back to the starting point of the Christian vocation. The word they had heard from Paul focused on God’s love, fully manifested in the death and resurrection of Jesus. Paul could not have found a more convincing expression of what he had probably repeated to them several times in his preaching: “It is no longer I who live, but it is Christ who lives in me. And the life I now live in the flesh I live by faith in the Son of God, who loved me and gave Himself for me” (Gal 2: 20). Paul did not want to know other than the crucified Christ (cf. 1 Cor 2: 2). The Galatians must look to this event, without letting themselves be distracted by other proclamations. In short – Paul’s intention is to compel Christians to realise what is at stake, so they do not allow themselves to be enchanted by the voice of the sirens who want to lead them to a religiosity based solely on the scrupulous observance of precepts. Because they, the new preachers who had arrived there in Galatia, convinced them they should turn back and return to the precepts they had observed and perfected before the coming of Christ, which is the gratuitousness of salvation.

Besides, the Galatians understood very well what the Apostle was referring to. They certainly had experience of the action of the Holy Spirit in their communities: as in the other Churches, charity and the various charisms had manifested themselves among them too. When put to the test, they had to answer that what they had experienced was the fruit of the newness of the Spirit. At the beginning of their coming to faith, therefore, was the initiative of God, not of men. The Holy Spirit had been the agent of their experience; to put Him in the background now in order to give primacy to their own works – namely, the fulfilment of the precepts of the Law – would be foolhardy. Holiness comes from the Holy Spirit and is the gratuitousness of redemption by Jesus: this justifies us.

In this way, Saint Paul invites us too to reflect: how do we live our faith? Does the love of Christ, crucified and risen again, remain at the centre of our daily life as the wellspring of salvation, or are we content with a few religious formalities to salve our consciences? How do we live our faith? Are we attached to the precious treasure, to the beauty of the newness of Christ, or do we prefer something that attracts us momentarily but then leaves us empty inside? The ephemeral often knocks at the door during our days, but it is a sad illusion, which makes us give in to superficiality and prevents us from discerning what is truly worth living for. Brothers and sisters, let us however keep the certainty that, even when we are tempted to turn away, God still continues to bestow His gifts. Throughout history, even today, things happen that resemble what happened to the Galatians. Even today, people come and harangue us, saying, “No, holiness is in these precepts, in these things, you must do this and that”, and propose an inflexible religiosity, the inflexibility that takes away from us that freedom in the Spirit that Christ’s redemption gives us. Beware of the rigidity they propose to you: be careful. Because behind every inflexibility there is something bad, which is not the Spirit of God. And for this reason, this Letter will help us not to listen to these somewhat fundamentalist proposals that set us back in our spiritual life, and will help us go ahead in the paschal vocation of Jesus. This is what the Apostle reiterates to the Galatians when he reminds them that the Father “supplies the Spirit to you and works miracles among you” (3:5). He speaks in the present tense, he does not say “the Father has supplied you with the Spirit”, chapter 3, verse 5, no: he says – “supplies”; he does not say, “has worked”, he says “works”. For, despite all the difficulties we may pose to His action, God does not abandon us but rather abides with us in His merciful love. He is like that father who went up onto the terrace every day to see if his son was returning: the love of the Father never tires of us. Let us ask for the wisdom always to be aware of this reality, and to turn away the fundamentalists who propose to us a life of artificial asceticism, far removed from the resurrection of Christ. Asceticism is necessary, but wise asceticism, not artificial.