The Place of the Ascension

A chapter from the book "In the Footprints of Our Faith" about the historical site in the Holy Land where Christ ascended into Heaven.

(From In the Footprints of Our Faith, which can be downloaded as a free eBook here):

Jesus Christ our Lord accomplished the work of redeeming mankind principally by the Paschal mystery of his blessed Passion, Resurrection from the dead, and glorious Ascension (cf. Catechism of the Catholic Church, 1067). Here we will look at the last of these three events, marking the end of his life on earth. “Many things have happened since our Lord was born in Bethlehem. We have thought of him in the manger, worshipped by the shepherds and the Magi; we have contemplated those long years of unpretentious work in Nazareth; we have gone with him all through the land of Palestine, as he preached the kingdom of God to men and went about doing good to all. And later on, during the days of his passion, we have suffered on seeing him accused and ill-treated and crucified.

"Then sorrow gave way to the joy and light of the resurrection. What a clear and firm foundation for our faith! But perhaps, like the Apostles in those days, we are still weak, and on the day of the ascension we ask Christ: ‘Lord, will you at this time restore the kingdom to Israel?’ Is it now that we can expect all our perplexity and all our weakness to vanish forever? Our Lord answers by going up to heaven” (Christ is Passing By, 117). 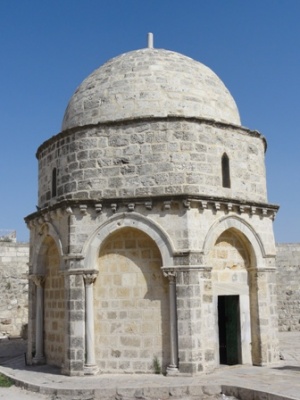 The biblical accounts of this event, which is affirmed in the Creed, are very concise. St Mark describes several appearances by the Risen Christ to his disciples, and then adds “So then the Lord Jesus, after he had spoken to them, was taken up into heaven, and sat down at the right hand of God” (Mk 16:19). St Luke, both in his Gospel and in the Acts of the Apostles, provides some details of the scene: “He led them out as far as Bethany, and lifting up his hands he blessed them. While he blessed them, he parted from them, and was carried up into heaven. And they worshipped him” (Lk 24: 50-52). “As they were gazing into heaven as he went, behold, two men stood by them in white robes, and said, ‘Men of Galilee, why do you stand looking into heaven? This Jesus, who was taken up from you into heaven, will come in the same way as you saw him go into heaven.’ They returned to Jerusalem from the mount called Olivet, which is near Jerusalem, a sabbath day’s journey away” (Acts 1: 10-12).

In harmony with this information, tradition situates the Ascension at the top of the central hill of the group called the Mount of Olives, just over a kilometer from the city in the direction of Bethphage and Bethany.

In the second half of the fourth century a church was built on this 800-meter-high hill. According to several sources the project was initiated by a noblewoman named Poimenia who had travelled to the Holy Land from Constantinople. The church was known as “Imbomon.” Egeria relates how the faithful of Jerusalem would gather at this spot for some ceremonies in Holy Week and at Pentecost. 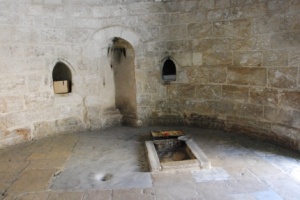 Like the Holy Sepulcher and other places of worship in Palestine, “Imbomon” was severely damaged during the Persian invasion in 614 AD, and afterwards restored by a monk named Modestus. Bishop Arculf, who visited it in around 670, left a valuable description. He described it as a round church with three inner porticoes and a round chapel in the centre, not roofed but open to the sky, to evoke the scene of the Ascension for pilgrims. On the eastern side of the space was an altar, protected by a small cover, and in the middle of it a rock which was venerated by the faithful as the last place on which our Lord’s feet had stood on earth; they descried the imprint of his footprints in the contours of the rock (cf. Adamnan, De Locis Sanctis, 1, 23; CCL 175, 199-200).

The shrine was rebuilt during the time of the Crusades, when part of it was turned into a convent of Canons Regular of St Augustine. In the thirteenth century the Muslims pulled down all the buildings again except for the central chapel (which remains standing today) and built a mosque on the site. Although the site is owned by a waqf or Islamic religious institute, on the solemnity of the Ascension Holy Mass is allowed to be celebrated there. The right to do so was granted to the Franciscan Custody of the Holy Land by the Ottoman authorities.

The chapel stands at the center of an octagonal space, surrounded by a wall which still contains the bases of pillars dating back to the time of the Crusades. According to archaeologists, the site of the small church, which is also octagonal in shape, is slightly different from the site of the Byzantine or Constantinopolitan church. Be that as it may, it has the same function, which is to preserve the memory of the footprints of Jesus and his Ascension into heaven. The exterior of the church is adorned with arches and pilasters, beautifully crowned with finely-carved capitals dating back to the twelfth century. Later on an octagonal drum and stone dome were added, and the spaces between the pillars were filled in with stone walls. Inside the church a hole in the flooring, framed by four pieces of marble, reveals the venerable piece of rock.


The mystery of the Ascension involves a historical event and a salvation event. As a historical fact, “Christ’s Ascension marks the definitive entrance of Jesus’ humanity into God’s heavenly domain, whence he will come again (cf. Acts 1:11); this humanity in the meantime hides him from the eyes of men (cf. Col 3:3)” (Catechism of the Catholic Church, no. 665).

When contemplating the scene of the Ascension of Jesus into Heaven, St Josemaria often stressed the fact of having to say goodbye to our Lord. “Like the Apostles, we remain partly perplexed and partly saddened at his departure. It is not easy, in fact, to get accustomed to the physical absence of Jesus. I am moved when I think that, in an excess of love, he has remained with us, even when he has gone away. He has gone to heaven and, at the same time, he gives himself to us as our nourishment in the Sacred Host. Still, we miss his human speech, his way of acting, of looking, of smiling, of doing good. (…) It has always seemed logical to me that the most holy humanity of Christ should ascend to the glory of the Father. The Ascension has always made me very happy. But I think that the sadness that is particular to the day of the Ascension is also a proof of the love that we feel for Jesus Christ, our Lord. He is God made man, perfect man, with flesh like ours, with blood like ours in his veins. Yet he leaves us and goes up to heaven. How can we help but miss his presence?” (Christ is Passing By, 117).)

As a salvation event, the Risen Christ’s entry into heaven shows us our own final destiny. “Jesus Christ, the head of the Church, precedes us into the Father’s glorious kingdom so that we, the members of his Body, may live in the hope of one day being with him for ever” (Catechism of the Catholic Church, no. 666). Pope Francis, a few weeks after being elected, helped us to reflect on the meaning of the Ascension and its consequences for Christian life. He took as his starting-point Jesus’ last pilgrimage to Jerusalem, when he knows that his Passion is at hand. “While he was ‘going up’ to the Holy City, where his own ‘exodus’ from this life was to occur, Jesus already saw the destination, heaven, but he knew well that the way which would lead him to the glory of the Father passed through the Cross, through obedience to the divine design of love for mankind. The Catechism of the Catholic Church states that: ‘The lifting up of Jesus on the cross signifies and announces his lifting up by his Ascension into heaven’ (no. 662). We too should be clear in our Christian life that entering the glory of God demands daily fidelity to his will, even when it requires sacrifice and sometimes means we have to change our plans” (Pope Francis, general audience, 17 April 2013).

“I am moved when I think that, in an excess of love, he has remained with us, even when he has gone away. He has gone to heaven and, at the same time, he gives himself to us as our nourishment in the Sacred Host. Still, we miss his human speech, his way of acting, of looking, of smiling, of doing good”

Referring to these words, the prelate of Opus Dei, Bishop Javier Echevarria, remarked, “Let us never forget, my daughters and sons, that there is no Christianity without the Cross, no true love without sacrifice, and let us try to conform our daily life to this joyful reality, because it means following in the footsteps of the Master” (Bishop Javier Echevarria, letter dated 1 May 2013).

In the same audience, the Pope also drew a lesson from the site our Lord chose for his departure. “The Ascension of Jesus actually happened on the Mount of Olives, close to the place where he had withdrawn to pray before the Passion in order to remain in deep union with the Father: once again we see that prayer gives us the grace to be faithful to God’s plan” (Pope Francis, general audience, 17 April 2013).

“Jesus has gone up to heaven, as we have seen. But as Christians we can talk to him, in prayer and in the Eucharist, as the twelve Apostles talked with him. We can come to burn with an apostolic fervour that will lead us to serve, to redeem with Christ, to sow peace and joy wherever we go” (Christ is Passing By, no. 120).

St Luke states that after our Lord left them, the Apostles “returned to Jerusalem with great joy” (Lk 24: 52). This reaction can only be explained by their faith and trust: they had understood that even though they would not see Jesus again in this life, “Jesus stays with them for ever, he does not abandon them and in the glory of the Father supports them, guides them and intercedes for them” (Pope Francis, general audience, 17 April 2013).