In 2017, 860 adults were baptized in Austria, many of them refugees. This is the story of Dieter and some of his friends who are preparing for baptism this year, in Salzburg. 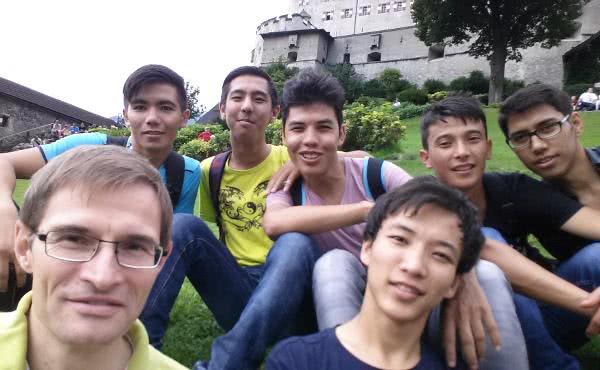 Dieter with some of those receiving catechism classes.

My name is Dieter and I live in Salzburg, Austria. I help out at the Juvavum Center (Bildungszentrum Juvavum), where currently 15 refugees are preparing to receive baptism. They come from Iraq, Iran, and Afghanistan. Let me share with you some of their stories.

Recently some of us (including a number who, when they fled to Austria, belonged to the Muslim religion) took part in the “Long Night of the Churches” (“Lange Nacht der Kirchen”), an initiative of the Catholic Church in Austria in which many churches keep their doors open all night.

In one of the sites, they offered the possibility to write one’s thoughts and hopes up on a board. A young Afghan wrote something in Persian, which he translated for me as, “I want Jesus to remain with me always.” And he was not the only one.

How did all this begin? During the Year of Mercy, in Juvavum, a center of formation whose spiritual care is looked after by Opus Dei, we thought about how we could help refugees. So we organized some football games, German lessons, and a few excursions with young refugees who were living in our city.

Christians were offering me shelter, food, money… and they were also very friendly. Why were they doing this?

Some of the those taking part became interested in the Catholic faith. One of them told me the following: “In Afghanistan, all I ever heard was that Christians were bad people. I am 20 years old now and I can form my own opinions. I came to Austria, and I see Christians offering me shelter, food, money… and they are also very friendly. Why are they doing this? I want to know more about Christianity.”

Another person told me that when he entered Traiskirchen – a camp that welcomes refugees who have just arrived – he saw a Christmas tree with decorations and he heard people talking about Jesus. That caused the first “spark” for him.

To those interested in the faith, we offer them the chance to participate in a course that follows the Catechism of the Catholic Church. Each of those taking part has someone who accompanies them and to whom they can explain their specific doubts. They can also go with that person to Mass on Sunday, and be helped to do a time of prayer, etc.

When we started these classes, I was doubtful about the intentions of some of them, wondering if they might be showing interest in the faith only because it might help them gain the permission of residence more easily. We made sure, however, that they understood that there was no relation between the two things. Recently, when I reminded one of them that the preparation for baptism lasts a whole year, he told me, “Even if I had to wait five years, I would do it. My conversion has nothing to do with my reasons for fleeing.”

I have also found that those who encounter Jesus also encounter his Cross, and this is equally true for refugees.

Another person was nervous about the results of his immigration papers, so I sent a WhatsApp message to encourage him, suggesting he abandon everything into Our Lord’s hands. He responded: “It makes no difference to me whether the result is positive or negative. I’ve found Jesus!”

An Afghan who was coming to the Catechism classes with a lot of enthusiasm, missed two classes in a row. I sent him a message inviting him to talk about it if he wanted. He told me that an Iranian friend had accused him of attending the classes for the sake of facilitating his stay in the country. When I told him that I trusted his good intentions, he gladly returned to the group.

Sometimes they are the ones who give me lessons. Once I suggested to one of them that he dedicate some minutes to prayer each day, and he told me, “You told me that three months ago, and since then I always pray in the morning and in the afternoon.”

We have also come to realize that instruction in the faith is not enough. They need to learn how to study a lot and intensely – in spite of the complexity of their situation – so that they are able to find jobs.

I have also found that those who encounter Jesus also encounter his Cross, and this is equally true for refugees. As an example, I will describe the story of two young people.

One Iraqi boy had been gravely wounded in the head when he was held hostage, which was part of the reason he had fled to Austria. Once in Austria, he spoke with enthusiasm about the new faith he had discovered and, as a consequence, was the victim of serious harassment in the refugee residence where he was living. They told him that he was not welcome and they destroyed his clothes. Therefore I had to find a private housing option for him, and for another fellow receiving instruction in the faith as well. 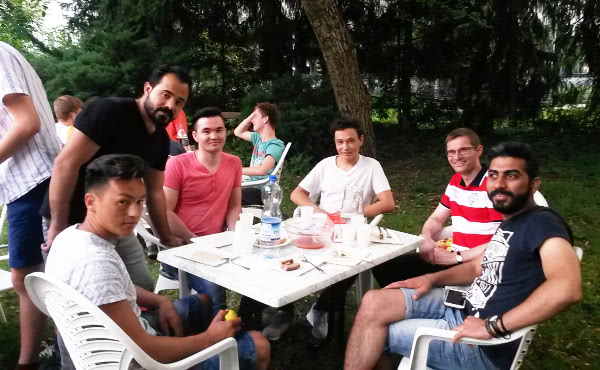 Shortly after this, he learned that his sister had been kidnapped and then killed. On top of this, when his own family learned about his conversion, they cut off all communication with him. The day he turned 27 years old, he came to the catechism class, showed me his phone, and said, “No one in my family has called me today. Jesus and Mary are my family now.”

The day he turned 27 years old, he came to the catechism class, showed me his phone, and said, “No one in my family has called me today. Jesus and Mary are my family now.”

The story of another friend, an Iranian, was also very difficult. He had to leave his country precisely because he had drawn close to the faith. He was baptized shortly upon arriving in Salzburg. When he was filling out the form to formalize his decision to become part of the Catholic Church, I learned that he had been married in Iran but that his wife had abandoned him and married another person, because of his conversion. When I asked him whether he had married for love or if it had been an arranged marriage, he broke down in tears. On top of this, not only had he lost his family, but the paperwork needed to stay in Europe was getting held up continuously. Although he did not understand why God was permitting all of this, he told me that was ready to take up his cross.

For me, meeting these refugees and their hunger for the faith has been a great gift. I never could have imagined something like this in my life. Although I dedicate 40 hours a week to professional work in other tasks, I thank God for the fact that, to my surprise, I am finding the time to attend to all of these friends and to help them through instructing them in the faith. And they are a great example for me. I have seen them suffer and cry, struggle and win. I see how, in spite of the many difficulties and traumatic experiences they face, they keep moving forward in their Christian life.

The only frustration for me is that none of them has yet received a positive response in their efforts to obtain a residence permit (which is why I have not mentioned any of them by name). It’s hard to imagine what might happen if one of them received a definitive negative response and would therefore need to return to their home country… That’s why I pray daily for these young refugees, and their journey in the faith.