"Look at the Crucifix... and listen"

From August 29th to September 1st, Monsignor Fernando Ocáriz visited the Shrine of Torreciudad in Spain, where he prayed to Our Lady and met with families, professionals and young people from different countries.

Shortly after arriving, Monsignor Ocáriz prayed for a while before the Blessed Sacrament in the chapel dedicated to Our Lady of Guadalupe, with many young people accompanying him. That afternoon he met with friends and the staff of Torreciudad, whom he encouraged to "thank God that you able to help out."

The Prelate of Opus Dei expressed his gratitude to the employees, members of the Board of Trustees and collaborators for "contributing to the apostolic work that is done here, with the same spirit of joy and work that I have seen in my recent trip to the United States and Canada."

Santiago, an architect who helped build the sanctuary between 1970 and 1975, asked a question about the growth of Torreciudad. He recalled "much love for God, together with difficulties and hope" during the construction, and also remembered Saint Josemaría telling them that our Lord would be merciful to those who had put love into the work of building the shrine.

The Prelate reminded them with Saint Josemaria that prayer is "our only weapon." He encouraged everyone to transform their work into prayer by offering it to God, which is fully compatible with the necessary concentration work calls for. "The first and fundamental prayer is the Eucharist, since all strength comes from Christ's Cross, made sacramentally present at Mass: the Redemption is there. It's beautiful to remember that every time we attend Mass, the Redemption of the world is happening there."

The Prelate continued: “The Redemption is constantly taking place. We who are nothing carry it out, not by our own strength but by the strength that comes from Christ in the Eucharist and in prayer: it's all there.”

During these months, Torreciudad is holding a fundraising campaign for a long-term renovation project. Jaume, who assists the Board of Trustees, told the Prelate about the plans. He said he feels lucky to work for the Shrine and that "it is a blessing" to ask for money for our Mother. "Although sometimes one suffers a bit, it is always worthwhile." In response, the Prelate said that “you are doing people a favor by asking," and that he should tell this to the potential sponsors with good humor, because it is true.

During the same encounter, several families who spent their summer vacation nearby told the Prelate some stories. Justo, a scientist, shared with him that four generations of his family have been enjoying the summer, “under the mantle of Our Lady of Torreciudad.” José María told the Prelate about how his two-year old granddaughter Natalia suffered a tragic accident earlier in the summer when she was alone and fell into a swimming pool. After being flown to the hospital by helicopter, she survived, also thanks to the prayers of many families.

Praying for Pope Francis and the Church

Monsignor Ocáriz also met with priests who were participating in a workshop held in La Solana. The Prelate told them about his trip to the United States and Canada, about his encounters with families and with the bishops of the cities he visited. In response to several questions, he encouraged them all “to pray a lot for the Church and for the Pope,” always with joy and hope.

Fr. Victor, a pastor of a church in Santiago de Compostela, told the Prelate that he had just celebrated the 59th anniversary of his ordination. Fr. Isaac said he had been ordained a few months earlier and that he would like prayers for his friend Álvaro, who is thinking of enrolling in the seminary. Fr. Onofre, 28 years old, likewise shared with him that he was ordained two months earlier and that he had just been entrusted with the pastoral care of a parish. As the get-together drew to a close, the Prelate knelt down to receive a blessing from all the priests.

The protagonists on Friday morning and Saturday afternoon were students: over a thousand of them participated in two large gatherings with Monsignor Ocáriz.

Some of them asked the Prelate questions about the Apostolic Exhortation Christus Vivit of Pope Francis. Pope Francis was a constant theme with the Prelate, who asked everyone to pray and offer their work for him. Lucia, who studies dentistry, said "I would like to read Christus Vivit and reflect on it in my prayer, because I think it can be very useful." "Well, go ahead and do that!" Monsignor Ocáriz replied.

The Prelate also encouraged them to "go against the tide" and to see the struggle for holiness as "a gift" rather than a list of demands. José Ignacio asked about how to avoid getting overwhelmed by challenges, and the Prelate replied that "generosity with God makes us happy," and therefore "it is worthwhile."

The Prelate also stressed that "God calls everyone" and that "each person has to see how God's love is made specific" in his or her life. Each person needs to freely seek the light of God's call and ask for the strength to want to say yes. He urged them "not to leave their freedom inoperative," stressing that freedom is "the capacity to make a commitment." Answering a question from Miguel, a student from Madrid, the Prelate replied, "You decide. You have to be the one to decide, because He doesn't impose Himself. Ask for light and strength, although there will always be a margin of uncertainty. Ask in your prayer, and seek advice."

Danna, a Colombian who is pursuing a Master's degree in psychology, also asked about vocational discernment: "How can I know what God wants from me?" The Prelate pointed to Christus Vivit, which "talks a lot about discernment. We all have a Christian vocation but the Lord does not let us see clearly at first because He wants us to be very free in choosing it. Discernment consists in asking for light to see and strength to want to. Our Lord expects our discernment to end with a 'let's go forward'." 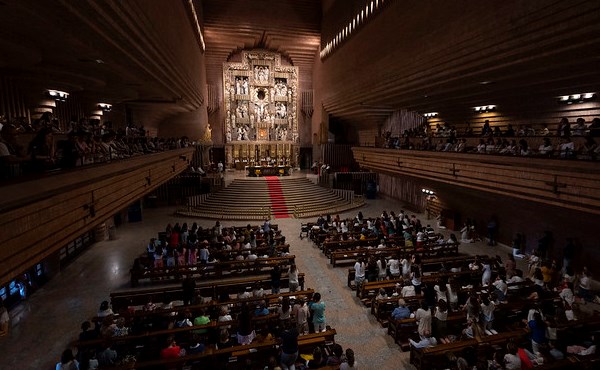 Elías, a second year high school student in Alicante, asked about the purpose of the Christian formation he receives. The Prelate said that the goal of formation is "identification with Christ, not self-improvement," saying it was important to transmit what one receives, seeking the true good of others.

Daniele, from Cagliari, asked for advice on how to be strong in giving witness with his Christian life. The Prelate encouraged him to be a true friend, without giving lessons but conveying the great joy of the personal and joyful experience of living close to God. Domi, a 15-year-old student from Budapest, asked him how to open up more youth clubs in his country: “It depends on you, that you assimilate the formation you receive and that you transmit it. Realize that it really depends on you and I being better, as Saint Josemaría used to say."

Zoya was born in Homs (Syria) and got a degree in Road Engineering while the war was going on. Now she is pursuing a Master's degree in Barcelona. She asked how she can continue helping her country. The Prelate encouraged her not to feel far away from Syria, since with her prayer and work she can directly help improve the situation: "We all pray for your country. As Catholics, we have to have a universal spirit. We shouldn't see the news of other countries or cities as something foreign to us. Sometimes we lack the heart to feel compassion for others, to suffer with those who suffer -- in Syria, Venezuela, etc. -- and at the same time, to rejoice with the good news of others as well."

Álvaro, from Barcelona, asked about using the Internet and social media effectively. The Prelate encouraged him to develop all his talents, “dedicating the appropriate amount of time” to each thing and without "allowing screens to keep you from seeing your friends." The Prelate also spoke about prudence and the fortitude to live holy purity in a positive sense, "since sexuality is good, created by God." He also added, "We should not be surprised by temptations nor discouraged by falls, because we always have the sacrament of confession to be able to move forward again. Purity is not a denial: it is a joyful affirmation."

There were several questions about interior life and how to pray. Monsignor Ocáriz suggested meditating on the Gospel, imagining oneself as one more character in the scene. He also said, "Look at the Crucifix... and listen." Another student asked about how to find silence nowadays, especially given the dominant presence of distractions like Spotify and Netflix. The Prelate stressed the need for "inner silence" and "to be silent before the tabernacle, looking at and contemplating the Crucifix, thinking about the fact that it is there for me." He also said “prayer is always effective and will bear fruit, even if we don't see the results. Ask for more faith and remember Our Lady, who experienced moments of darkness amid great light, moments of not understanding what was happening and of anguish."

The Prelate received several families with many children. He greeted each one, giving them a photo, a rosary and some candy. He also attended the organ concert that is held every Friday in August at Torreciudad, and met with several groups of professionals who were passing through there. He devoted special attention to the staff that lives there and works directly in the daily management, to whom he spoke about the importance of their work. The rector of the Sanctuary, Fr. Pedro Díez Antoñanzas, and other priests and staff members, showed the Prelate the improvements that have been made to the Shrine since his last visit a year ago.