"I march to show that pro-life is pro-women"

Catalina Scheider Galiñanes, a junior at Oakcrest School, addressed the 2020 March for Life Rally in Washington D.C. on Friday, January 24. 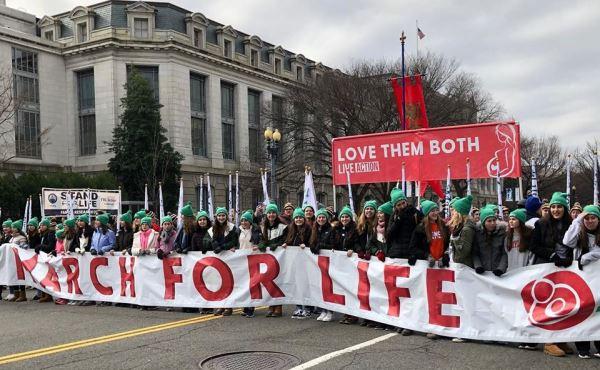 Catalina Scheider Galiñanes is the president of her school's Respect Life club and was chosen as the "student speaker" for this year's national March for Life in Washington D.C. In her speech, she connected the pro-life cause to the work of the early women's rights movement:

"This year marks 100 years since American women were granted the right to vote. The heroic suffragists knew that the fight for women's rights did not end with the vote. They were strong pro-life advocates and helped to pave the way for the modern pro-life movement."

Referring to the early feminists, Catalina said she hoped they would "continue their legacy of justice by defending the most vulnerable, the most marginalized, those whose rights go completely unrecognized: the unborn boys and girls throughout the world."

"The 19th ammendment gave women the right to vote in the United States," she pointed out, "but millions of young women today are denied the right to life while they are still in the womb. With the same passion and strength of the suffragists, we have to fight against the horror of abortion."


Thanks to the students of @Oakcrestva for leading the March for Life and standing up for women and their children! #WhyWeMarch pic.twitter.com/eqel4v12VU
— March for Life (@March_for_Life) January 26, 2020

The annual March, which seeks to end abortion by uniting, educating, and mobilizing people in the public square, starts on the National Mall and ends at the Supreme Court building. Oakcrest, located in Vienna, VA, has a long tradition of supporting the March for Life. Each year, the school closes on the day of the March so that students, faculty, and staff can all attend with their families.

“As a school we have always been committed to building a culture of life, and so we were excited and proud to lead the March for Life this year,” says Oakcrest Head of School Dr. Mary T. Ortiz.

Oakcrest School is an independent school for girls in grades 6-12 guided by the teachings of the Catholic Church. For over 40 years, the school has provided an in-depth liberal arts education to girls of all faiths while fulfilling its mission to challenge and inspire its students to thrive in college and throughout their lives. Learn more at Oakcrest.org.