An article published at the online journal Church Forum. The author stresses the importance given to the role of the laity in the Church by both soon-to-be Blessed John Henry Newman and Saint Josemaria.

Tracing a link between St .Josemaria Escriva and Cardinal John Henry Newman might seem a rather forced comparison. Any connection between these two ground-breaking figures in the life of the Church, one in the nineteenth century and the other in the twentieth, could appear somewhat slender. Their social, cultural and historical backgrounds and contexts were very different. Newman was an English convert, an essayist and apologist who ended up as a cardinal; Escriva was the Spanish founder of an institution within the Church. Nevertheless, a deeper look at them reveals considerable harmony on the spiritual plane and a parallel between their pastoral interests.

Both Newman and Escriva proclaimed the important role that the laity are called to play within the Church. Both suffered for preaching about this role, which was seen by many as an indefensible novelty. Newman, for example, says that the “sensus fidei , ” the “sense of faith” of the People of God, should be considered a locus theologiae , a source to be consulted to discover the authentic content of the faith. The Church, as recipient of the deposit of divine revelation, cannot do without the lay faithful, since they form one of her main constituent parts. Without them, she would lose a valuable source of faith, and furthermore, the result would be clericalism—a diminution of the genuine nature of the Church, reducing her to the ordained ministers and the hierarchy.

St Josemaria Escriva also had to endure much incomprehension for stating firmly, long before Vatican II, that the laity are called to the fullness of Christian life, to sanctity. He insisted that lay people are not second-class Christians, but have a specific divine call of their own, for example, the vocation to marriage. This means that they have a specific way of following and doing God’s will in the Church and in the world. And what Newman termed the “sense of faith,” St Josemaria called, rather more colloquially, the “Catholic nose” of the People of God.

Both Newman and Escriva saw clearly that the simple fact of being laity in the Church does not make people into spokesmen of the Holy Spirit. They need deep Christian study and formation and an ongoing effort to live in accordance with their faith. Newman dedicated his intellectual and pastoral efforts to this aim, editing the journal The Rambler , working to set up the Catholic University of Dublin, as well as the Oratory school in Birmingham. He said, famously, “I want a laity, not arrogant, not rash in speech, not disputatious, but men [and women] who know their religion, who enter into it, who know just where they stand, who know what they hold and what they do not, who know their creed so well that they can give an account of it, who know so much of history that they can defend it. I want an intelligent, well-instructed laity. I wish [them] to enlarge [their] knowledge, to cultivate [their] reason, to get an insight into the relation of truth to truth, to learn to view things as they are, to understand how faith and reason stand to each other, what are the bases and principles of Catholicism" (Sermon 9, Duties of Catholics towards the Protestant View , 1851).

St. Josemaria, for his part, as well as a rich output of preaching and spiritual books, which have helped lay-people to find God in their ordinary lives, founded at God’s behest an institution whose aim is to remind everyone of the universal call to holiness, and make it accessible. The Work he founded not only tries to remind people that they should be saints in their ordinary lives, but to show them how , offering the help they need in order to achieve it. He himself defined Opus Dei as “an immense work of catechesis,” because it offers specific formation, especially shaped to enable people to develop what he termed “unity of life”—living in accord with their faith at each moment of the day. 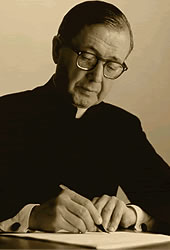 Example of the first Christians

Both Newman and Escriva knew that what they were proposing was really nothing new—it is “as old and as novel as the Gospel,” said Escriva. Both took the lives of the early Christians as their source of inspiration, since, as Newman said, Christians need to look to them to recover the fullness of the faith. Both stressed the need to achieve a deep unity between faith and reason, on the basis of scientific study in the fields of both sacred and profane learning. Thus, for example, Escriva required all Opus Dei priests to be experts in some field of academic study—all of them have University degrees, and many of them have doctorates. At the same time, he wanted Opus Dei lay-people to study theology and related subjects, to doctorate level when appropriate.

Newman said, “I want the intellectual layman to be religious, and the devout ecclesiastic to be intellectual” (Sermon 1, Intellect the Instrument of Religious Training , preached in the University Church, Dublin, feast of St. Monica, Sunday after Ascension, 1856).

Both Newman and Escriva had a deep love for the truth, and refused to elevate conscience to an autonomous principle of morality. And while both insisted on the need to form one’s conscience, in moral and doctrinal questions, under the guidance of the Church’s Magisterium, both also proclaimed what we could term a “freedom of consciences” in temporal matters. Escriva preached tirelessly about the laity’s freedom and autonomy in political and social questions, explaining that there should be no ecclesiastical interference or pressure on them in such matters. The laity should, however, strive to be consistent with their faith and faithful to their consciences. They should never allow themselves, he maintained, to separate any of their actions from the dictates of their consciences, but should shoulder full moral responsibility for all that they do. Newman, in turn, spoke and wrote in depth about the value of conscience as the place of our encounter with God, the deepest truth of man’s being, and what drives all moral action.

Many more aspects of the teaching of both men could be highlighted, such as the need to combine devotion and doctrine; the need for theologians to do their work prudently and responsibly, in full union with the Church; and a deep understanding of the Church as Mystery and sacrament, which, together with a human element, leads to communion with the divine. However, what has been described above may already be enough to justify the claim of a deep harmony between John Henry Newman and Josemaria Escriva.

Fr. Arroyo Martinez holds a doctorate in Philosophy at the University of the Holy Cross, Rome .