New Priests in the Eucharistic Year

Bishop Javier Echevarría ordained 42 new priests for the Prelature of Opus Dei in the Basilica of St. Eugene in Rome on May 21. The new priests come from Nigeria, the United States, the Philippines, and various European and Latin American countries.

About 3,000 relatives and friends accompanied the new priests during the ceremony and applauded them during the closing procession. Among those who attended the Mass were members of the pop band, “Second,” whose guitarist is the brother of one of the new priests, José María Guirao.

In his homily, Bishop Echevarría urged the candidates for ordination to remember always "that the gift and the task of consecrating the Eucharist, which our Lord is granting you today, carries with it a great responsibility."

The Prelate went on to encourage the new priests to follow the example of St. Josemaría, who liked to identify himself as “a priest of Jesus Christ” who is also "a sinner who is madly in love with Jesus Christ." These two, the Prelate added, “are in perfect harmony because the incomparable dignity of the priest is, as our Founder taught, a great gift compatible with our own insignificance.”

The Prelate greeted the priests’ families and asked them to pray a lot for them: “Now they will need your prayers more than ever.” At the same time, he added, “we thank God, who will not fail to sustain Christ’s ministers, and we beseech him to send more priests into the whole world.” 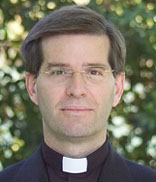 Don Jorge and Father Anthony, two of the new priests

Jorge Llop, one of the newly ordained, is a Basque engineer 46 years of age who acquired in his youth a great interest in Russian literature and in sports. A few years ago he suffered from a grave illness that obliged him to spend several months in the hospital: “The Prelate of Opus Dei wrote me a dozen unforgettable letters during that long recovery. He always kept checking to see how I was getting along.” That experience helped Don Jorge to see that “every event, even the most painful ones, is part of God’s plan for each person. That makes it easier to find its meaning, which is exactly the same as the meaning Jesus gave to his Passion. The mystery of everyone’s cross is to be understood within the mystery of the Cross.”

Anthony Babafemi Ogunsanya, another of the new priests, was born in Lagos, Nigeria 33 years ago to an Anglican father and Catholic mother. “St. Josemaría Escrivá, who played a decisive role in my life, said that we owe 90% of our vocation to our parents, and so we have a great debt of gratitude toward them.”

On April 5, Father Anthony was able to take part, as a deacon, in the transfer of John Paul’s casket from the Clementine Hall to St. Peter’s Basilica, and so “to see the Pope up close, to accompany him, to pray in a very special way in the midst of the throng that crowded the Square. That will be one of the most impressive memories I’ll take with me from Rome.”

The editor of www.opusdei.org another of the newly ordained 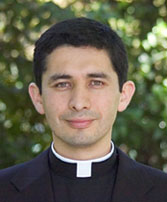 Juan Carlos Ibarra, a Mexican journalist and experienced webmaster, has been combining his theological studies in Rome since 1998 with the position of general editor of this website. He now wants to remind the readers that “the new priests will be relying on the help of your prayers!”

When questioned about his editorial work, Don Juan Carlos replied: “It has been a very rich experience. The versatility of the internet requires a lot of creativity in telling Opus Dei’s message and news about the Church. We’ve tried everything and learned from successes and failures. We gain a great deal of encouragement from messages the users send us. During the year 2003 people in more than 70 countries send us 15,000 messages about all kinds of things, but especially questions about the Catholic Church and the Work, testimonies of faith, stories about favors through the intercession of St. Josemaría, and prayer requests. One message stands out in my memory: A young person in Beijing who belongs to the ‘Underground Catholic Church’ in China asked us to pray that he know how to remain loyal to the faith and to the Pope.”

“The last days of John Paul II gave me a great lesson on what it means to be a priest,” adds Don Juan Carlos. “I also feel a special commitment to pray for Benedict XVI. The day of the ‘white smoke’ I was with a friend who lost his sight some years ago. He told me that he had come several times to St. Peter’s Square during these past weeks and that being there with so many praying people had helped him to realize that ‘the Church is alive.’ That experience changed his disillusionment with the faith into hope. During Pope Benedict’s homily on the day he began his Pontificate those words remained deeply engraved in me, ‘the Church is alive.’ This makes me feel a responsibility to collaborate with our new Pope in transmitting that vitality to everyone I encounter along the way.”