Kam Him Centre, located on the Kowloon peninsula, is one of 18 new Opus Dei centers which began activities in the year 2001.

An old legend holds that Kowloon (a name meaning 'nine dragons') was the home of nine dragons which were transformed into the nine hills that give a special beauty to the landscape of this part of the Hong Kong territory.

Since the summer of 2001, Kam Him Centre has found a home in the midst of these hills of Kowloon. In Cantonese the word Kam means "brocade" or "tapestry", and Him means "modest" or "humble". The center, which opened its doors on August 14, occupies the second floor of a residential building. Kam Him organizes secular and Christian activities for students of the area and also promotes projects of social service for the disadvantaged. The establishment of Kam Him was made possible thanks to the generosity of a large number of families. 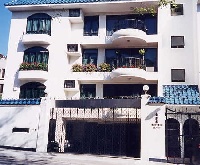 In its first six months of operation, the Center has organized cultural gatherings, courses on English and on study techniques, and sports activities. Some programs on Christian life and courses in Catholic doctrine have also been held. Only 4.1% of Hong Kong's six million people are Catholic.