“My life has been a love story”

With the closing of the diocesan phase of the beatification process of Toni Zweifel, “Avvenire” has published an article by Francesco Ognibene about his life. Here is a translation of the article. 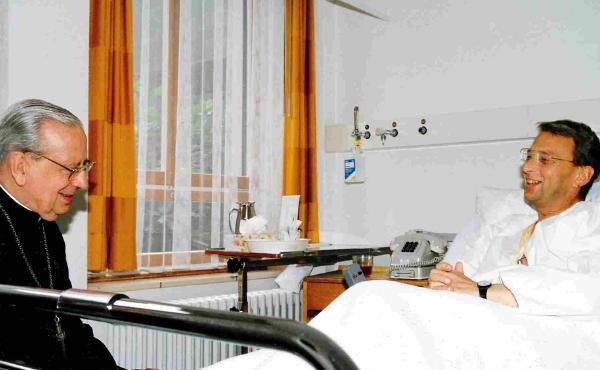 Link to article in Avvenire by Francesco Ognibene

“My life has been a love story.” It is difficult to imagine more beautiful words from someone taking leave of this world. To those who came to visit him as leukemia was slowly robbing him of life, Toni Zweifel, just 51 years old, spoke about his happy, successful, fulfilled life—the kind of life we all would like to have. The life that has earned for him a reputation for holiness and led to the opening of his cause of beatification. Not bad for a Swiss engineer who lived his deep Christian faith in a very normal way, in the classrooms at the Polytechnic University in Zurich, in the university residence he directed, where he helped guide many young people on their Christian path (two of whom became priests), in his commitment to international cooperation at the Limmat Foundation.


The search for holiness—that of a lay person in the middle of the world, as the Second Vatican Council teaches—has a textbook example in Toni Zweifel’s life. Such a convincing one that the diocese of Chur decided to open the canonical process that recently concluded on July 2nd, with documents and testimonies that will now be sent on to Rome. For Toni’s life story is capable of speaking to many people. He was born in 1938 into a family from the Swiss canton of Glarona, who came to Bresciano in Italy in search of work, a curious case of reverse immigration.

His grandfather Federico did very well in his business, which he handed on to his son Giusto, a Waldensian, who married Antonia, from a family near Lake Garda. Toni was born in San Giovanni Lupatoto, and went to high school in Verona. On graduating, he moved to Switzerland to study engineering. In the classrooms of the “Poli” in Zurich he first got to know the lay spirituality of Opus Dei: the possibility of striving to become a saint in the middle of the world. What could be more exciting for a young man who was looking for a worthwhile ideal to dedicate his life to?

As Toni would write years later to Saint Josemaria Escriva: “When I had attained practically everything I had set out to accomplish, and was thinking that now for the rest of my life everything would continue that way, governed by the same desires and ambitions, I felt that something was missing, that I had to go beyond this. I had to love truly and overcome my self-centeredness, and make a decision to commit myself.”

And Toni made his decision. He chose God, other people, the most needy. He chose the horizon that lies at the heart of the human soul: “Heaven and earth seem to merge far away, on the horizon. But don’t forget that where they really meet is in your heart as a child of God.” That engineer must have meditated often on Escriva’s words, which inspired his life, like that of so many lay people who have found in Opus Dei their own path in the world and in the Church.

Without doing anything to draw attention. A Christian the same as the others, as we see in the biography published by Ares: Toni Zweifel. Un ingegnere sulle tracce di Cristo. “When I think about Toni,” says Don Arturo Cattaneo, a priest who knew him in the student residence in Zurich, “I am struck by how he practiced his faith in such a natural way, how every corner of his daily life reflected his faith.” Toni is just like us, and we would like to be someone like him