In 1985 Toni Zweifel, in perfect health, jotted down a somewhat surprising thought: “The bad thing is not so much the fact that one has cancer, but that one’s relationship with God isn’t strong enough to turn the sickness into something positive."

In 1985 Toni Zweifel, in perfect health, jotted down a somewhat surprising thought: “The bad thing,” he wrote, “is not so much the fact that one has cancer, but that one’s relationship with God isn’t strong enough to turn the sickness into something positive. The only real evil is sin. Our Christian faith, a vital relationship with God, can turn even cancer into a love story.”

Toni was then at the height of his productivity. He couldn’t suspect how soon he himself would be in the situation of that cancer patient. A few months later he was found to have a type of leukemia that provided little hope for a cure. Aggressive chemotherapy was required, with very painful side affects. 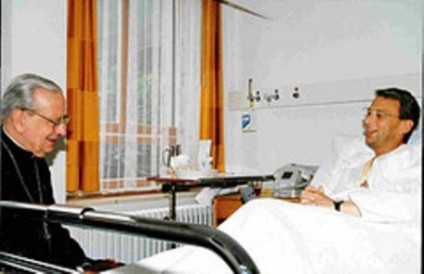 From the first moment, Toni strove to unite his suffering to that of Christ, as he had learned to do from St. Josemaría Escrivá. He didn’t want to leave Jesus alone on the cross, but to accompany him, to share in his sentiments and take part in his work of salvation. Prayer and sacrifice became his principal occupation during his hospital stays.

“Being healthy or sick,” he wrote a few months before his death, “is less important than our relationship with God, which is the only thing that matters and which makes a person happy even in sickness. Whatever happens, I know that it is for the best.”

Through suffering, drawing closer to God

In December of 1986, ten months after leukemia was diagnosed, the doctors thought they had beaten the disease. He then began to worry that, now that he was well, he would begin to weaken in his sense of God’s presence. To keep this from happening, he strove to keep aware of his sickness. In difficult professional matters he often asked himself: “But Toni, have you prayed enough for a successful outcome?” And he would answer, “Yes, when I was sick…” And then he would spur himself on to pray, saying, half seriously and half in jest: “Let’s not force our Lord to strike me down again, so that I pray a bit more.”

When a few years later he had the first relapse, Toni understood it as a call to more intense prayer. “Blessed be these divine caresses in regard to my health,” he said. “They help me to turn my attention to more important things and to pray more.” And he made a firm resolution to continue doing so when he was able to leave the hospital and go back to work.

He felt himself closely united to the Prelate of Opus Dei, Msgr. Alvaro del Portillo: He offered up many of his sufferings and discomforts for his intentions. During a trip by Don Alvaro to North America in 1988 he wrote: “I have composed a sort of child’s prayer that I say during the night when I wake up and accompany you in America.”

Toni was very aware that in his “exceptional circumstances” he could be a great support and spur for the faith of others. Many people came to visit him at the side of his sickbed. Rather than seeking sympathy for himself, he inquired about their own situation and problems. He often took advantage of these moments “to plunge right in and speak about God.” In this way he led many people to a new and deeper relationship with God.

In his situation, Toni always kept in mind the fate that Christ himself had willingly embraced at the end of his life. This helped him to avoid taking his own sickness too seriously. “Out of love for us, God incarnate chose for himself death on the Cross. If leukemia had been a greater demonstration of his love, he would have chosen that way to die.” He expressed great gratitude to those who prayed for him; but he left it to God to decide how many of these prayers redounded to his benefit and how many, as he put it, “were re-routed to much more serious and important matters.”

In March 1988 he suffered an acute fever that rose above 104ºF. A friend spent hours cooling his forehead. Toni later said that person had been “like a mother” in his care for him. A year later he wrote to Msgr. del Portillo again. He spoke about all the people coming to visit him and closed by saying: “You can see that I am ‘having a great time.’ I try to be close to you while I am profiting from this treasure which right now only amounts to a bit more tiredness.” Msgr. del Portillo noted in the margin: “he knows his illness is now in it terminal state and could lead to his death at any moment.” A few days before he died Toni suffered a cerebral hemorrhage. As a result he could not speak for a while, although his mind was still clear He bore it with great calm and when he could speak again he joked: “The computer was still working but the printer wasn’t.”

Early on the morning of November 24, 1989, Toni succumbed to his illness. A few minutes before his last breath he said good-bye with a wave of his hand to the two persons accompanying him. Several days earlier he had told someone that his life had been “a divine love story.” He had enjoyed a wonderful intimacy with God, for which he was very thankful.

Toni died with the certainty of having attained true happiness. He experienced in his own soul what Pope Benedict XVI later wrote in his book Jesus of Nazareth : “The Cross is the true ‘height.’ It is the height of ‘love to the end’ ( Jn 13:1). On the Cross, Jesus is exalted to the very ‘height’ of the God who is love” (p. 349).

Information about Toni Zweifel's life and cause of canonization.