"Lord, teach me to pray"

In his December 5 general audience, Pope Francis began a new cycle of catechesis on the Lord's prayer. "Jesus’ prayer, his intimacy with the Father, governs everything." 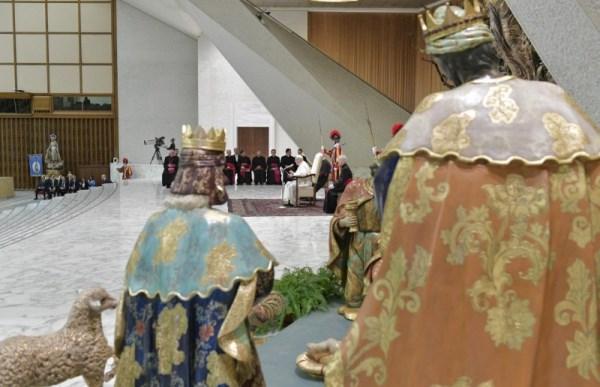 Today we begin a cycle of catechesis on the Lord’s Prayer.

The Gospels have provided us with very vivid portraits of Jesus as a man of prayer: Jesus prayed. Despite the urgency of His mission and the persistence of the people who claim His attention, Jesus feels the need to seclude Himself in solitude and to pray. The Gospel of Mark tells us this detail from the fist page of Jesus’ public ministry (cf. 1: 35). Jesus’ inaugural day in Capernaum ended triumphantly. As the sun set, multitudes of sick people arrived at the door of Jesus’ dwelling: the Messiah preached and healed. In this way the ancient prophesies and the expectations of many people who suffered were fulfilled: Jesus is the God Who is close, the God Who frees us. But that crowd is still small compared to the many other crowds that gathered around the prophet of Nazareth; in certain moments they were oceanic assemblies, and Jesus is at the centre of it all, expected by the people, the outcome of the hope of Israel.

And yet He disengages Himself; He does not end up hostage to the expectations of those who have not elected Him as a leader. Which is a danger of leaders: to attach themselves too much to the people, not to allow some distance. Jesus realizes this and does not end up hostage to the people. From the first night of Capernaum, He shows that He is an original Messiah. In the last part of the night, as dawn begins to announce itself, the disciples are still looking for Him, but they are unable to find Him. Where is He? Until Peter finally tracks Him down in an isolated place, completely absorbed in prayer. And he says to Him, “Everyone is looking for you!” (Mk 1: 37). The exclamation appears to be a clause attached to a unanimous success, the proof of the good result outcome of a mission.

But Jesus says to His followers that He has to go elsewhere; that it is not for the people to seek Him, but first and foremost for Him to seek the others. Therefore He must not lay down roots, but remain continually a pilgrim on the roads of Galilee (vv. 38-39). And He is also a pilgrim towards the Father, that is: praying. On the journey of prayer. Jesus prays.

And everything happens in a night of prayer.

In some pages of the Scripture it seems to be most of all Jesus’ prayer, His intimacy with the Father, that governs everything. It is, for example, especially in the night in Gethsemane. The last phase of Jesus’ journey (the most difficult of all among those He has completed so far) seems to find its meaning in Jesus’ continuous listening to the Father. A prayer that is surely not easy, rather, a genuine “agony,” in the sense of that of athletes, and a prayer capable of sustaining the journey of the cross.

Here is the essential point: there, Jesus prayed.

Jesus prayed with intensity in public moments, sharing the liturgy of His people, yet He also chose secluded places, apart from the whirlwind of the world, places that allowed Him to descend into the secret of His soul: He is the prophet Who knows the stones of the desert and rises up on the mountains. Jesus’ last words, before expiring on the cross, are words of Psalms, that is, of prayer, of the prayer of the Jews: He prayed with the prayers that His mother had taught Him.

Jesus prayed like every man of the world prays. And yet, in His way of praying, a mystery was also enclosed, something that certainly did not escape the eyes of His disciples, if in the Gospels we find that plea, so simple and immediate: “Lord, teach us to pray” (Lk 11: 1). They saw Jesus pray and they wanted to learn to pray: “Lord, teach us to pray.” And Jesus did not refuse, He is not jealous about His intimacy with the Father, but came precisely to introduce us to this relationship with the Father. And in this way He becomes a teacher of prayer for His disciples, as certainly He wants to be for all of us. We too should say, “Lord, teach me to pray. Teach me.”

Even if perhaps we have prayed for many years, we must always learn! Man’s prayer, that yearning that arises so naturally from his soul, is perhaps one of the deepest mysteries of the universe. And yet we do not even know if the prayers we address to God are effectively what He wants to hear addressed to Him. The Bible also gives us testimonies of inopportune prayers, that in the end are rejected by God: it is sufficient to recall that parable of the Pharisee and the publican. Only this latter, the publican, returns home from the temple justified, because the Pharisee was proud and liked the people to see him praying, and pretended to pray: his heart was cold. And Jesus says: this is not justified, “for those who exalt themselves will be humbled, and those who humble themselves will be exalted” (Lk 18: 14). The first step for praying is to be humble, to go to the Father and to say, “Look at me, I am a sinner, I am weak, I am bad,” each person knows what to say. But one begins always with humility, and the Lord listens. Humble prayer is listened to by the Lord.

Therefore, beginning this cycle of catechesis on Jesus’ prayer, the most beautiful and just thing we must all do is to repeat the disciples’ invocation: “Lord, teach us to pray”. We can all go a little further, and pray better; but ask the Lord, “Lord, teach me to pray.” Let us do this, in this time of Advent, and He surely will not let our invocation fall to nothing.