"In this Family, love for God and neighbor centered on loving attention to Jesus, the Father’s eternal Word, who learned how to talk with human words and to love with the heart of a man."

We don't know for certain how long the Holy Family remained in Egypt. The most likely conjecture is that it was between one and two years. St. Matthew, the evangelist who records this episode, gives us quite a succinct account, as he does on other occasions. All he tells us is that when Herod was dead, an angel of the Lord appeared to Joseph in Egypt as he slept and said: 'Rise up, take the Child and his Mother, and go into the land of Israel, for those who sought the Child's life are dead ' (Mt 2:19-20). 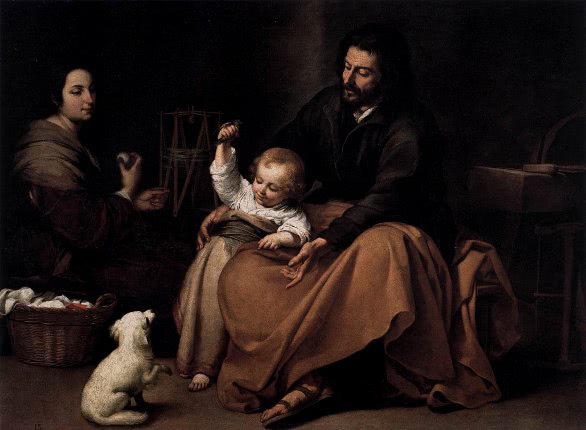 The Patriarch responds, as always, without delay: Joseph arose, took the Child and his Mother, and went into the land of Israel (Mt 2:21). He doesn't hesitate even for a moment. Taking only the time needed to collect his tools and few possessions, he would have said a quick goodbye to those who had been their neighbors during those months and set about preparing for the return journey.

"The Patriarch responds, as always, without delay: "Joseph arose, took the Child and his Mother, and went into the land of Israel" (Mt 2:21).

Coptic tradition tells us that the Holy Family traveled by sea, not by land. It is a likely hypothesis. Now that the danger had passed, the sea route was more economical and entailed fewer privations than the overland path of the caravans. They probably traveled on one of the numerous vessels that went down the Nile from the city of Memphis (today's Cairo) to Alexandria, where they could board a small boat for the four or five day trip along the Mediterranean coast to Ascalon, Joppa, or Yamnia.

On disembarking, Joseph would have inquired about the new king in Judea, Archelaus, one of Herod's sons, whose cruelty almost matched his father's—he had just beheaded several thousand of his subjects in the very Temple itself. At first, Mary's spouse had planned to settle in Bethlehem, the birthplace of the Messiah. But since the angel had not indicated a specific destination—only that he return to the land of Israel—it seemed better to go to a place outside that king's jurisdiction. The Lord confirmed Joseph in his plan through an angel: But when he heard that Archelaus reigned over Judea in place of his father Herod, he was afraid to go there, and being warned in a dream he withdrew to the district of Galilee (Mt 2:22). The prophecy of Micah had announced the birth of Jesus in Bethlehem, but other oracles—as Matthew recalls—pointed to Nazareth as the place where the Messiah would grow to maturity. So he went to dwell in a city called Nazareth, so that what was said by the prophets would be fulfilled: 'He will be called a Nazarene ' (Mt 2:23).

The trip to Nazareth was calm and peaceful, made without haste. We can imagine how happy our Lady and Joseph were when they crossed the plains of Esdraelon and reached Galilee. They felt at home in that familiar countryside where they had spent the years of their childhood and adolescence. In Nazareth they were reunited with relatives and friends, surprised to see them back after so many months without news. There would have been no lack of embarrassing questions, motivated both by affection and a healthy curiosity. But Mary and Joseph were discreet in their responses and didn't reveal the truth about Jesus that they kept in their hearts.

In this Family, love for God and neighbor centered on loving attention to Jesus, the Father's eternal Word.

They returned to their small house built onto one of the many caves around Nazareth. They may have found it in bad repair, having been gone for so long. But Joseph would have restored it skillfully, and Mary set about giving it a thorough cleaning, assisted perhaps by her cousin, Mary of Cleophas, the mother of James and Joseph, and also of Simon and Jude, and by other relatives.

The daily life and work of the Holy Family gradually returned to normal, without anything extraordinary. St. Luke, who resumes his account at this point, states simply that the Child grew stronger, full of wisdom, and the grace of God was in him (Lk 2:40). Our Lady, like all mothers, watched over the human growth of her Son and Lord with loving eyes, full of admiration at how God was working so naturally. Joseph worked hard, grateful that his labor was of service to the mystery of the Redemption. In this Family, love for God and neighbor centered on loving attention to Jesus, the Father's eternal Word, who learned how to talk with human words and to love with the heart of a man.