Mary's Immaculate Conception is given clear expression in texts of the Magisterium, Fathers of the Church and saints. We offer here a selection.

From the very beginning, and before time began, the eternal Father chose and prepared for his only-begotten Son a Mother in whom the Son of God would become incarnate and from whom, in the blessed fullness of time, he would be born into this world. Above all creatures did God so love her that truly in her was the Father well pleased with singular delight. Therefore, far above all the angels and all the saints so wondrously did God endow her with the abundance of all heavenly gifts poured from the treasury of his divinity that this mother, ever absolutely free of all stain of sin, all fair and perfect, would possess that fullness of holy innocence and sanctity than which, under God, one cannot even imagine anything greater, and which, outside of God, no mind can succeed in comprehending fully.

And indeed it was wholly fitting that so wonderful a mother should be ever resplendent with the glory of most sublime holiness and so completely free from all taint of original sin that she would triumph utterly over the ancient serpent. To her did the Father will to give his only-begotten Son—the Son whom, equal to the Father and begotten by him, the Father loves from his heart—and to give this Son in such a way that he would be the one and the same common Son of God the Father and of the Blessed Virgin Mary. It was she whom the Son himself chose to make his Mother and it was from her that the Holy Spirit willed and brought it about that he should be conceived and born from whom he himself proceeds.

When the Fathers and writers of the Church meditated on the fact that the most Blessed Virgin was, in the name and by order of God himself, proclaimed full of grace by the Angel Gabriel when he announced her most sublime dignity of Mother of God, they thought that this singular and solemn salutation, never heard before, showed that the Mother of God is the seat of all divine graces and is adorned with all gifts of the Holy Spirit.

Hence, it is the clear and unanimous opinion of the Fathers that the most glorious Virgin, for whom "he who is mighty has done great things," was resplendent with such an abundance of heavenly gifts, with such a fullness of grace and with such innocence, that she is an unspeakable miracle of God—indeed, the crown of all miracles and truly the Mother of God; that she approaches as near to God himself as is possible for a created being; and that she is above all men and angels in glory.

Wherefore, in humility and fasting, we unceasingly offered our private prayers as well as the public prayers of the Church to God the Father through his Son, that he would deign to direct and strengthen our mind by the power of the Holy Spirit. In like manner did we implore the help of the entire heavenly host as we ardently invoked the Paraclete. Accordingly, by the inspiration of the Holy Spirit, for the honor of the Holy and undivided Trinity, for the glory and adornment of the Virgin Mother of God, for the exaltation of the Catholic Faith, and for the furtherance of the Catholic religion, by the authority of Jesus Christ our Lord, of the Blessed Apostles Peter and Paul, and by our own: "We declare, pronounce, and define that the doctrine which holds that the most Blessed Virgin Mary, in the first instance of her conception, by a singular grace and privilege granted by Almighty God, in view of the merits of Jesus Christ, the Savior of the human race, was preserved free from all stain of original sin, is a doctrine revealed by God and therefore to be believed firmly and constantly by all the faithful."

VOICE OF THE FATHERS 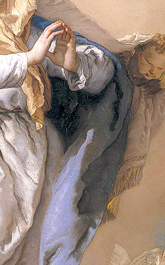 Today, humanity recovers the gift it had received when first formed by divine hands, and returns immaculate to its original nobility. The shame of sin had cast a shadow upon the splendor and charm of human nature; but when the Mother of Him Who is Beauty itself is born, this nature recovers in her person its ancient privileges, and is fashioned according to a perfect model, truly worthy of God. And this fashioning is a perfect restoration; this restoration is a divinization, and this divinization is an assimilation to the primitive state… In a word, the reformation of our nature begins today; the world, which had grown old, undergoes a transformation which is wholly divine, and receives the first fruits of its second creation

Who indeed was this Virgin and from what sort of parents did she come? Mary, the glory of all, was born of the tribe of David, and from the seed of Joachim. She was descended from Eve, and was the child of Anna. Joachim was a gentle man, pious, raised in God's law. Living prudently and walking before God he grew old without child: the years of his prime provided no continuation of his lineage. Anna was likewise God-loving, prudent, but barren; she lived in harmony with her husband, but was childless. As much concerned about this, as about the observance of the law of the Lord, she indeed was daily stung by the grief of childlessness and suffered that which is the usual lot of the childless—she grieved, she sorrowed, she was distressed, and impatient at being childless.

Thus, Joachim and his spouse lamented that they had no successor to continue their line; yet the spark of hope was not extinguished in them completely: both intensified their prayer about the granting to them of a child to continue their line. In imitation of the prayer heard of Hannah (1 Kings 1: 10), both without leaving the temple fervently beseeched God that He would undo her sterility and make fruitful her childlessness. And they did not give up on their efforts, until their wish be fulfilled. The Bestower of Gifts did not condemn the gift of their hope. The unceasing power came quickly in help to those praying and beseeching God, and it made capable both the one and the other to produce and bear a child. In such manner, from sterile and barren parents, as it were from irrigated trees, was borne for us a most glorious fruition—the Immaculate Virgin.

Thus the immaculate fruition issuing forth from the womb occurred from an infertile mother, and then the parents, in the first blossoming of her growth brought her to the temple and dedicated her to God. The priest, then offering the order of services, beheld the face of the girl, and he became gladdened and joyful, seeing as it were the actual fulfillment of the Divine promise.

We face here a mystery of love. Human reason barely begins to comprehend. Only faith can shed some light on how a creature can be raised to such great heights, becoming a loving target for the delights of the Trinity. We know this is a divine secret. Yet because our Mother is involved, we feel we can understand it more — if we are entitled to speak this way — than other truths of our faith.

Theologians have frequently come up with similar reasons to explain in some way the meaning of the abundant graces showered upon Mary and culminating in her assumption to heaven. They put it this way: "It was fitting; God could do so; therefore he did." This is the clearest reason why our Lord granted his Mother, from the very moment of her immaculate conception, all possible privileges. She was free from the power of Satan. She is beautiful, tota pulchra, spotless and pure in soul and body. 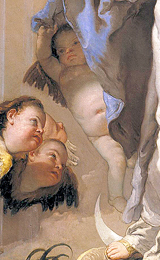 Saint Josemaria, Christ is Passing By, no. 171

How people like to be reminded of their relationship with distinguished figures in literature, in politics, in the army, in the Church!... Sing to the Immaculate Virgin, reminding her: Hail Mary, daughter of God the Father: Hail Mary, Mother of God the Son: Hail Mary, Spouse of God the Holy Spirit... Greater than you, none but God!

Perhaps some of you might be thinking that the ordinary comings and goings of your working day are not going to help you much to stay close to someone as pure as our Lady. But I would just ask you to reflect a little. What are we looking for all the time in things we do, even without thinking about it especially? If we are motivated by the love of God and we work with a right intention, then we are seeking whatever is good and clean, whatever brings peace to our conscience and happiness to our soul. Yes, you might say, but don't we still have our faults? Indeed, but it is precisely by acknowledging our faults that we are able to see, more clearly than ever, just what our goal has to be. What we are looking for is happiness; not a momentary happiness, but one that is deep and lasting and both human and supernatural.

There is one creature who achieved such happiness here on earth because she is God's masterpiece: our most holy Mother Mary. She lives now and is protecting us. She is there, body and soul, with the Father and the Son and the Holy Spirit. She is the same person who was born in Palestine, who gave herself to God while still a child, who received the message from St Gabriel the Archangel, who gave birth to our Saviour and who stood beside him at the foot of the Cross.

In her, all ideals become a reality; but this should not make us think that her sublime greatness makes her inaccessible to us. She is the one who is full of grace and the sum of all perfections; and she is also our Mother. Her power before God is such that she can obtain anything we ask for, and, like any mother, she wants to answer our prayers. Like any mother also, she knows and understands our weaknesses. She encourages us and makes excuses for us. She makes the way easy for us and, even when we think there is no possible solution for our worry, she always has one ready to offer us.

Saint Josemaria, Friends of God, no. 292