"Forgiveness is much more than a therapeutic experience"

The “Holy Land Dialogues” held at the Saxum Visitor Center in Israel is an international colloquium that seeks to foster understanding and dialogue between people of different cultures. 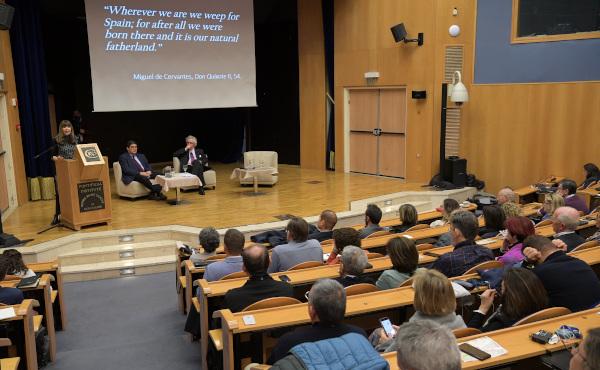 The Holy Land Dialogues take place in Jerusalem and are organized by the Saxum Foundation.

Since 2016, Saxum has been hosting a biannual seminar on dialogue, a value they hope to promote in a special way in the Holy Land and in those who come to participate. The 2020 edition focused specifically on the importance of forgiveness.

Around 200 participants from over 20 countries enjoyed a series of talks alternated with visits to the holy places in and around Jerusalem. The main speakers included Ruth Fine, a professor of Spanish and Latin American literature at the Hebrew University of Jerusalem, and Mariano Crespo, a philosophy professor at the Institute for Culture and Society at the University of Navarra.

“FORGIVENESS CONTAINS A GIFT, which is DIRECTED at THE PERSON WHO IS FORGIVEN”

Linda Corbi, general secretary of the Saxum Foundation, introduced Carlos Cavallé, president of the Social Trends Institute, co-sponsor of the event. Cavallé noted that “the sole objective of the Social Trends Institute is to foster understanding. If we engage in a dialogue of cultures, it is because we want to achieve synergies that affect us all.”

Professor Crespo discussed the logic of forgiveness: “Forgiveness goes beyond the laws of justice. It can help restore inner peace. But forgiveness is much more than a therapeutic experience. Forgiveness contains a gift, which is directed at the person who is forgiven." He went on to say that “forgiveness implies that the person is more important than the offense. The offender has a higher value that transcends the act inflicted. We recognize the immoral act. But by rejecting the act, we do not reject the person.”

"IN JUDAISM, FORGIVENESS IS A MITZVAH, A DIVINE ORDER. THE TORAH COMMANDS US: ‘You shall NOT HATE YOUR BROTHER IN YOUR HEART’”

Professor Ruth Fine spoke about how literature can help us remember and recover from trauma, taking examples from Cervantes' Don Quixote. She argued that to really learn from the past, one must forgive and at the same time hold on to memory.

"In Judaism," Fine said, "forgiveness is a mitzvah, a divine order. The Torah commands us: 'You shall not hate your brother in your heart.' True strength is expressed by overcoming the instinct to take revenge and being able to forgive. ” She added, “as Jews, we are commanded to remember. Memory has a place in forgiveness. Because only in remembering do we have the capacity to learn, to forgive and to reconstruct the common ground of our past.”

The sessions were moderated by Daniel Johnson, founding editor of The Article and moderator of the last two editions of the Holy Land Dialogues. Over the course of the week, participants discussed the most relevant themes associated with forgiveness: offense, reparation, feelings and emotions, memory, history, etc.

At the end of the program, participants took part in a multimedia tour at the Saxum Visitor Center, and those who wanted to attended the Ash Wednesday liturgy in the Visitor Center chapel. They were also able to walk along a part of the Emmaus Trail, which begins a few hundred meters from Saxum, in the town of Abu Ghosh.

After reflecting on forgiveness, the participants in the Holy Land Dialogues continued their pilgrimage for several days, visiting the holy sites around Jerusalem.