This is the second book by Saint Josemaría Escrivá (after “The Way”) to be placed in its full historical context. “It is a book,” some have said, “that the heart grasps immediately.”

The St. Josemaría Escrivá Historical Institute has set itself the task of situating the complete works of the Founder of Opus Dei in their full historical context. After The Way, the saint’s first book, comes the publication, in Spanish, of the historical-critical edition of Holy Rosary carried out by three theologians from the University of Navarra: Fr. Pedro Rodriguez, Fr. Javier Sesé, and Fr. Constantino Anchel.

What brought St. Josemaría to write a book about the Rosary? 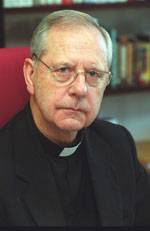 He wrote it because he felt God moving him to do so. It “flowed from his heart” to give expression to his way of contemplating our Lord and Holy Mary. At the same time, as he told his spiritual director, he wanted to “encourage our friends along the path of contemplation.” He was referring to the young students and professionals he was dealing with at the time.

What are the biggest discoveries you made regarding Holy Rosary on analyzing it in depth?

We discovered many new things. There was a lot we didn’t know and that we have learned in the course of our research. By looking closely at the rough drafts, the papers and the letters of St Josemaría, we were able to see how the two stages of the book’s composition unfolded and the place of the other sections that over the years were added: the prologues, author’s notes, etc. Speaking as a theologian, I was very impressed by the close connection one can see at all stages between lectio divina (the prayerful reading of Sacred Scripture) and contemplation and apostolic witness.

Did your research uncover anything noteworthy regarding the fact that the saint wrote the whole book “at one go”?

In fact, this is one of the principal clarifications we achieved. As I said, we now know the whole textual history of Holy Rosary , which is described in detail in the critical edition. I will leave it at that, so as not to go on too long here. St. Josemaría wrote it in 1931, probably on the 6th of December, by the sanctuary of the church of Santa Isabel, “all at one go,” as he himself attested, or “in one sitting,” as Don Alvaro del Portillo once said.

When the fourth edition was being planned in 1945 (a handsome pocket-book edition illustrated with drawings by Luis Borobio), the author decided to expand the text for most of the mysteries, in order to more suitably arrange the sequence of text and illustrations with the page numbers. These new additions were, above all, biblical passages placed so as to leave intact what he wrote “at one go” back in 1931.

This brings to mind some words of Romano Guardini about his own very interesting book on the Rosary. Over more than twenty years he made draft after draft, none of which he found satisfactory. “The most elevated task for any spiritual literature,” Guardini says, “should without doubt be to speak of God in such a way that the human heart understands it immediately. But can anyone achieve that?” Perhaps these words of the great German theologian can help explain what happens with Holy Rosary : with no drafts, written all at one go, and yet the heart understands it immediately.

This is the second historical-critical edition of St. Josemaría’s works. What characteristics does it share with The Way ? The Way was written over the course of almost a whole decade, the thirties of the last century, and reveals the author’s very rich and varied spiritual experience during those first years of Opus Dei’s life. By contrast, as I already said, the core text of Holy Rosary was written in just one day. Nevertheless, the unity of both texts is total. It is very much the same person who writes Holy Rosary and The Way .

At the end of the historical-critical edition of The Way there is a chronological index of the various points in the book. There one can see that in the first six days of the Novena to the Immaculate Conception in the year 1931, St Josemaría wrote down what would be the future points 853, 854, 870, 855, 771, 864, 430 and 857 of The Way . On the seventh day of the Novena came Holy Rosary , written “at one go.” I invite the reader to read and meditate on these points in The Way along with Holy Rosary . The common patrimony of both books is clear: the sense of divine filiation and the life of childhood.

What other historical-critical editions can we look forward to?

We are planning to bring out critical editions of all of St Josemaría writings, both his published works and those not yet published. Work on this is already underway, but it will take a number of years. The two that will be finished first are most likely Conversations with Monsignor Escriv á de Balaguer and Christ is Passing By .

What does Holy Rosary contribute to the history of this traditional Marian devotion?

I would emphasize, above all, two aspects that are mutually interconnected: first, a form of praying the Rosary that is notably contemplative, which shows the depth vocal prayer can reach when it is done well; second, the focus given to this contemplative mode of prayer by an attitude of spiritual childhood, thus infusing a tone of simplicity, tenderness and daring to the prayerful loving dialogue with God and with his Mother.

How does this book fit into the personal interior experiences of St. Josemaría?

In our study one can see in detail how its composition in 1931 was the culmination of some especially intense months in St Josemaría’s interior life and apostolic activity. They were months marked by very specific supernatural illuminations regarding divine filiation and spiritual childhood, and by a generous personal response to those lights received from God. This response deeply enriched his own spiritual life and contributed in a decisive way to the initial development of Opus Dei’s activity.

What do you see as the main spiritual insights reflected in Holy Rosary ?

The capacity to express, in very few but well-chosen and beautiful words, all the depth of the principal mysteries in the life of Jesus Christ and of Mary. It achieves the difficult harmony St. Josemaría sought to foster in prayer: to have the piety of children and the doctrine of theologians.

Each of St. Josemaría’s books has a particular style: short points, homilies, descriptions of scenes.…What stands out in Holy Rosary in this sense? Is it unique in Christian literature in some way? 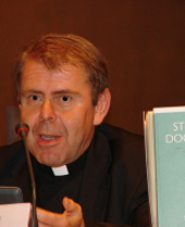 Bishop Echevarría, in his prologue to the critical edition, says that many writers and countless readers consider this book as an authentic jewel from the literary point of view, because of its style and evocative images; the clarity of its prose which makes it readily understandable for all types of people independently of their literary or cultural formation; and the depth and simplicity with which it sets forth the Gospel events .

Holy Rosary is a work that shows great spontaneity and beauty from a literary point of view. How does the author achieve it? A noted Chilean writer and priest, Fr. Ibañez Langlois, highlights “the narrative point of view” through which the author introduces the various scenes as if he were an eye-witness. This, in turn, allows him to speak in the first person of the events that unfold, inviting the reader to join him in viewing these scenes through the eyes of a child.

What role do the illustrations play in the book?

In 1934 when the first printed edition of Holy Rosary was being prepared, St. Josemaría wanted the text to be accompanied by illustrations. He entrusted these illustrations to the architect Ricardo Fernández Vallespín who, in turn, sought inspiration in the “masters,” as he put it, and made frequent visits to the National Library. However, owing to some unknown circumstances, Holy Rosary first appeared with only the text. The most likely reason is that the modest printing house put in charge of the book had technical difficulties in producing the illustrations.

The second edition, printed in Valencia in 1939, did not have any illustrations either. It was only in the 1945 edition that this desire of St. Josemaría was finally made a reality thanks to sketches by Luis Borobio.

Has Holy Rosary been an inspiration to other artists?

Luis Borobio grasped the spiritual atmosphere of Holy Rosary very well. The next edition was published in Portugal with illustrations by another artist. In fact, the various publishers have constantly looked to the rich patrimony of Christian art for renderings of the mysteries that would combine well with St. Josemaría’s text, as can be verified by a perusal of the list of editions at the end of the critical edition.

But the book has also stimulated the creativity of quite a few artists who have rendered the scenes in accordance with how their reading of the book affected them. In this sense, it is surprising how authors with very different cultural and ethnic sensibilities have been able to depict the mysteries in harmony with the traditions of their people, as can be seen in the Russian and Chinese editions, or in that done in Kenya.

Photo Gallery of Mysteries of the Rosary in Shrine of Torreciudad