The Family Catechism program in Calgary, in western Canada, is now in its fifth year of existence, with twenty-two families and sixty children taking part. 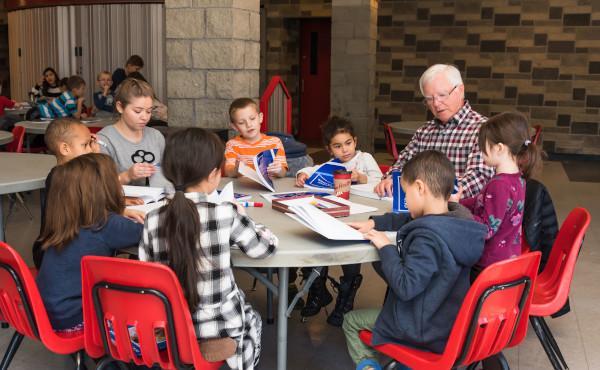 Bob. a retired engineer and grandfather, directs one of the classes.

“The history of Family Catechism here in Calgary proves yet again,” says Joe with a grin, who is one of the promoters, “that in the apostolic works the project comes first and then the budget.” Mike, the first promoter, laughs as he adds: “Money? We had none; besides, we made the commitment that it should be affordable for families who wanted to participate.”

The catechism groups meet a dozen times during the school year, for three hours on Saturdays. Dads and Moms volunteer to teach the classes for groups of different ages. Separate catechism classes are offered for adults who are interested, while their children are attending their own class.

We have followed the program that other faithful of the Prelature and friends began thirty years ago in the province of Ontario. In 1987, almost by chance, we met a family in a rural town in Ontario who expressed great interest in organizing catechism classes for young people in the area. The first class began in 1988 in a rented school. Now Family Catechism is offered in seven cities in Ontario, with over five hundred children taking part.

Implementing this plan in Calgary has had its challenges. This oil city in the state of Alberta in western Canada is home to 1,300,000 people, who live scattered over many square kilometers. Therefore, finding a central location was the key.

Mike spent almost a year trying to find a place with an affordable rent. We also faced the challenge of getting families to commit themselves, since sometimes parents need to work fifty or even sixty hours a week, and have little strength left for the weekend.

We decided that to finance the project, each family could contribute a modest amount to buy books and videos. At an organizational meeting for parents, Mike mentioned that he had taken out an initial loan to get the project underway. During the break, Tyler approached Mike and asked him what the amount of the debt was, and wrote a check to cover it. Mike found a French-speaking cultural center that could rent us the theater room and cafeteria for an affordable amount. The set-up wasn’t perfect, but we made it work. We organized the classes at different tables in the large dining room. News about the classes spread quickly by word of mouth and the first families met in September 2014. 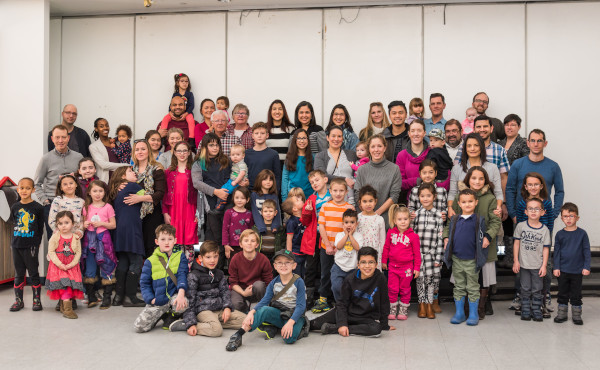 In the four years since we began, our experience is that every time we meet about three quarters of the registered families attend. And the teachers in charge of the catechism classes never fail to turn up.

About half the families are immigrants to Canada from Latin America, and some are fairly recent arrivals. Everyone appreciates the patience shown the children during the classes. We make a real effort in this regard, since this quality is sometimes missing in our Canadian society.

Likewise, families appreciate the opportunity their children have to make friends with other young Catholics; adolescents meet in small groups with others their own age who also want to learn and grow in their faith, which makes them feel more at ease and willing to share and open up with others.

The Ontario program has expanded so much and become so popular that the promoters decided to set up the Family Foundations Institute, to give solidity and continuity to the initiative. 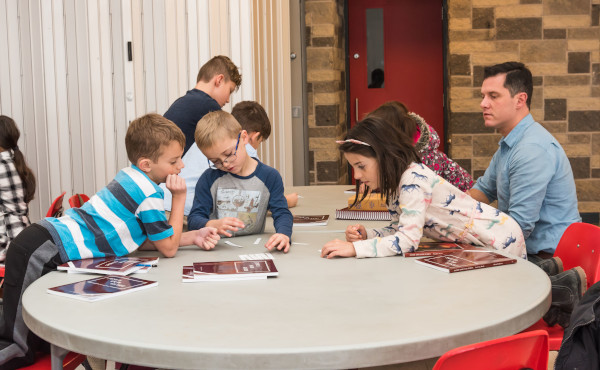 In our Calgary program Elias, a Nicaraguan-Canadian and the father of six children, who oversees the distribution of classes among teachers, also provides coffee and a snack each session. Following the guidelines suggested by the organizers of the Family Foundations Institute, Elias gives priority to personal interaction and organizes a twenty minute break in the middle of the three hours of classes so that all those involved can get to know each other better.

There are also opportunities to build friendships at the end of each session, when cleaning up and putting things back in place. We also have a friendly “family style” meal after the last meeting of the course, in the month of May. And in the summer, the families involved in the program organize a barbecue in the municipal park.


Family Catechism has proven to be a wonderful opportunity to get to know others who want to grow in their faith, in a relaxed family atmosphere.