Doubleday edition of THE WAY presented at Opus Dei's US headquarters

A new Doubleday edition of The Way, the most popular book by Opus Dei founder Saint Josemaría Escrivá, went on sale in bookstores across the United States and Canada on May 9.

The release was launched at a presentation on May 9 in Manhattan at Murray Hill Place, the U.S. headquarters for Opus Dei.

“Josemaría Escrivá reminds me very much of Thomas à Kempis,” said Auxiliary Bishop Ignatius Catanello of Brooklyn. His remarks to the guests focused on how The Way was helping to spread the Second Vatican Council’s teaching of the universal call to holiness. “For me, The Way has been very helpful,” he said, and described it as “chock full of inspiration.”

Responding to a question about media attention to The Da Vinci Code, Msgr. Thomas Bohlin, Vicar of Opus Dei for the US, said: “The Da Vinci Code will pass; The Way will remain.” 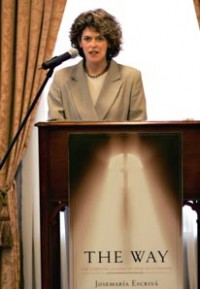 Mary Elise Eckman of Opus Dei’s National Board referred to the “unprecedented literary circumstances that led to Doubleday’s interest in re-publishing The Way,” and added: “Our wish is that The Way will be Doubleday’s next bestseller; securing itself on the bestseller list for at least 156 weeks.”

“What attracted Doubleday’s Religious Division to publish this work,” said Bill Barry, Vice President of Random House and Director of Religious Publishing of Doubleday, “is our commitment to bring the best books of Christian spirituality to our readers.”

“The Way is many things all at once: a love story, a call to heroism,” said Barry. He described it as a “spiritual classic,” one of “those books that have a sustained, powerful influence on people. They can be catalysts for action or they can motivate silent contemplation.” The Way, he said, gives people “the promise of finding God in the ‘everyday’.” 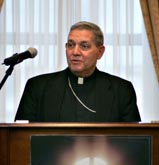 John Coverdale, Professor of Law at Seton Hall University and research director at the St. Josemaría Institute, remarked that “The Way proposes holiness in daily life as a real-life goal for normal Christians who hold down a job and take care of their families, and it offers them practical ways of progressing toward that goal.” In this, “The Way remains as fresh and even as startling as it was when it first began circulating in the form of mimeographed notes almost 75 years ago.”

The Way is a collection of points for prayer. Since it was first published in 1934, more than four and a half million copies have been sold, in 43 different languages.

Written in a direct, conversational style that makes it accessible to the reader, The Way has been commended by such spiritual guides as Thomas Merton and Pope Paul VI.

The new edition, titled The Way: The Essential Classic of Opus Dei’s Founder (Doubleday/Image; May 9, 2006; Trade Paperback; $10.95), features a new introduction by Bishop Javier Echevarría, the Prelate of Opus Dei. The new edition may be purchased here.

Reflecting Escrivá’s belief that God speaks through the people and happenings of everyday life, The Way blends passages from sacred Scripture with anecdotes drawn from Escrivá’s life, snatches of conversation, and selections from his personal letters. These insights are divided into chapters such as “Prayer,” “Presence of God,” “Our Lady,” “Little Things” and “Joy.”

Another presentation of the new edition of The Way will take place in Washington, D.C., on May 10 at 6 p.m. at the Catholic Information Center, located at 1501 K Street, NW.