Decree on the Heroic Virtues of Alvaro del Portillo

Decree signed by Benedict XVI on June 28, 2012 recognizing the heroic virtues of the Servant of God Alvaro del Portillo. 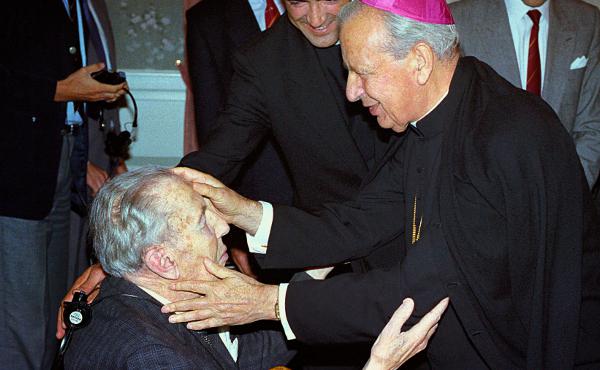 CONGREGATION FOR THE CAUSES OF SAINTS, ROME

and the PERSONAL PRELATURE of the HOLY CROSS and OPUS DEI

of The Servant of God

DECREE ON THE VIRTUES Vir fidelis multum laudabitur (Prov 28:20). These words of Sacred Scripture manifest the most characteristic virtue of Bishop Álvaro del Portillo: fidelity. He lived an unquestioned fidelity to God, carrying out his will promptly and generously; fidelity to the Church and the Pope, fidelity to his priesthood, and fidelity to his vocation as a Christian in every moment and circumstance of his life.

“Faithfulness over time is the name of love,” said Pope Benedict XVI (Homily at the Shrine of the Blessed Virgin Mary, Fatima, May 12, 2010). The Servant of God was a living example of charity and fidelity for all Christians. He lived the spirit of Opus Dei wholeheartedly, in an exemplary way, without exceptions or shortcuts of any kind. Opus Dei calls Christians to seek the fullness of the love of God and neighbor through the sanctification of the ordinary tasks that make up their day. “To sanctify one’s work; to sanctify oneself in that work and to sanctify others through that work”: this is the way to describe the intense life of the Servant of God, first as an engineer, then in his priestly ministry and lastly as a Bishop. In each and every activity, he gave himself completely, knowing that it was there that he was meant to assist the saving mission of the Church.

The Servant of God was born in Madrid on March 11, 1914 of devout and God-fearing parents, the third of eight siblings. He earned doctorates in Civil Engineering, in History and in Canon Law. In 1935, when he was 21 years old, he joined Opus Dei. The Founder, St. Josemaría, soon discovered in him a most effective helper. On June 25, 1944 he was ordained a priest. From then onwards he dedicated himself to his priestly ministry. The very day he was ordained St. Josemaría chose him as his confessor. In 1946 he established his residence in Rome to assist the Founder in the governance and expansion of Opus Dei. He was Secretary General of Opus Dei (1939-1946 and 1956-1975), Counselor for Italy (1948-1951), Procurator General (1946-1956), and Rector of the Roman College of the Holy Cross (1948-1954).

On September 15, 1975 he was elected as the first successor to St. Josemaría as head of Opus Dei. The central element of his program of governance was continuity in the application of the teachings of the Founder. Furthermore, he dedicated his best energies in carrying out one particular task deeply desired and largely prepared by St. Josemaría: obtaining the proper canonical configuration to reflect the founding charism of Opus Dei. This was achieved on November 28, 1982, when Blessed John Paul II erected Opus Dei as a Personal Prelature and appointed Álvaro del Portillo as Prelate. On January 6, 1991 the Servant of God received episcopal ordination from the Roman Pontiff. Early on the morning of March 23, 1994, a few hours after returning from a pilgrimage to the Holy Land, God called his servant to Himself. That same day Blessed John Paul II attended the wake, and, after praying in silence, recited out loud the hymn Salve Regina.

During his nineteen years as the head of Opus Dei, Álvaro del Portillo’s pastoral zeal fostered the spread of the apostolates of the faithful of the Prelature in the service of the Church to twenty new countries.

His apostolic concern led him to make trips to many different countries, with a view to encouraging the faithful of the Prelature and many other men and women of all walks of life in their spiritual life and apostolate. In his work of evangelization, he tried to ensure that the apostolic activity of the Prelature was always carried out in the service of the local Church. In his concern for the doctrinal formation of priests, he founded the Pontifical University of the Holy Cross in Rome, a project which St. Josemaría had encouraged. He wrote numerous juridical, theological and spiritual works of note concerning the priesthood and the laity, such as Faithful and Laity in the Church; Consecration and Mission of the Priest; Una vida para Dios. Reflexiones en torno a la figura de Josemaría Escrivá de Balaguer; Immersed in God: Blessed Josemaría Escrivá, Founder of Opus Dei.

The Servant of God based his dedication to the mission he received on a deep sense of divine sonship. This led him to seek to identify himself with Christ in a trusting self-abandonment to the will of the Father and love for the Holy Spirit. He sought to be constantly immersed in prayer, strengthened by the Eucharist and by a tender devotion to the Blessed Virgin Mary.

He displayed heroism in facing illness, in which he saw the Cross of Christ, as well as in his brief imprisonment during the period of religious persecution in Spain (1936-1939), and in the mistreatment received on account of his fidelity to the Church. He was a man of profound goodness and affability, sowing peace and serenity to those around him. No one can recall a discourteous gesture, signs of impatience, nor words of reproach or protest in response to the difficulties he encountered. Rather, he learned from God to forgive, to pray for one’s persecutors and to open his priestly arms welcoming one and all with a smile and with great mercy.

The Servant of God demonstrated his love for the Church by his constant union with the Roman Pontiff and with the Bishops: he was always a most faithful son to the Successor of Peter, faithfully adhering to his person and teaching. In describing the figure of this Pastor, what stands out above all is his vigorous solicitude for all the faithful of Opus Dei. His humility, prudence, fortitude, joy, his simplicity, his self-abnegation and his ardent desire to win souls for Christ can be all summed up in his episcopal motto: Regnare Christum volumus! (We want Christ to reign!)

The fame of holiness of the Servant of God, already recognized during his own lifetime, spread throughout the whole world in the years following his death. Between 2004 and 2008 two canonical processes æque principales were carried out regarding the life, virtues and reputation of holiness of the Servant of God at the Tribunal of the Vicariate of Rome and the Tribunal of the Prelature, as well as eight rogatory inquiries in different dioceses of Europe, North America, South America and Australia. A special Congress of Theological Censors took place on February 10, 2012, and gave a unanimous positive response against proposed doubts regarding the heroic exercise of virtue and reputation of holiness of the Servant of God. The members of the Congregation for the Causes of Saints gave a favorable opinion at the Ordinary Congregation convened on June 5, 2012, over which I, Cardinal Angelo Amato, presided, and in which the Relator was his Eminence Cardinal Antonio Cañizares Llovera

Upon presentation of the summary of the different phases of the process to the Supreme Pontiff Benedict XVI by the undersigned Cardinal Prefect, the Holy Father, accepting and ratifying the evaluation of the Congregation for the Causes of Saints, today solemnly declared: Clear evidence exists as to the theological virtues of Faith, Hope and Charity, towards both God and neighbor, as well as the cardinal virtues of Prudence, Justice, Temperance and Fortitude, with their associated virtues, in heroic degree, and of the reputation of holiness of the Servant of God Álvaro del Portillo y Diez de Sollano, titular Bishop of Vita, Prelate of the Personal Prelature of the Holy Cross and Opus Dei; this is established in this case and for purposes attendant thereon.

The Holy Father has ordered that this Decree be made public and be recorded in the acts of the Congregation for the Causes of Saints.