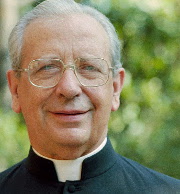 
Blessed Alvaro del Portillo was born in Madrid (Spain) on 11 March 1914, into a large and deeply Christian family. As well as graduating as a Public Works official, he obtained doctorates in Civil Engineering, History and Canon Law.


In 1935 he joined Opus Dei. He lived his Christian vocation with great loyalty and faithfulness, through his work and everyday duties, and helped to draw fellow students, colleagues at work and many other people closer to God.