Cardinal Schönborn Speaks on the Biblical View of Work

"God gave men the dignity of being partakers in creation." In a Mass commemorating Blessed Josemaria Escriva's birth, the Archbishop of Vienna discussed the biblical view of work and Blessed Josemaria's message of sanctification through work.

Vienna (KAP) -- The biblical view of work was expounded Wednesday night by Christopher Cardinal Schönborn, during a solemn mass on the occasion of the centennial of the birth of Opus Dei's founder, Blessed Josemaria Escriva. The Viennese archbishop recalled that Escriva had placed at the center of his activities the view that work is part of human dignity, that nothing lacks dignity so much as the loss of work. The founder of Opus Dei, who was beatified in 1992, affirmed that everyday work is a way of sanctification. To have work gain this dimension, however, a “leap into faith” is necessary, noted the Cardinal. Similarly, the gospel describes how Peter cast down his nets at Jesus' word, in a place where fish could not usually be caught, the cardinal said.

Cardinal Schönborn stressed that it is the deepest conviction of Judaism and Christianity that God gave men the dignity of being partakers in creation. Men can create and form. Work is only sanctifying, though, if it builds on more than personal knowledge and professional competence. The power of the Word of God needs to be made visible. The Viennese archbishop pointed out that Jesus had lived as a workman: “He demonstrated what a life of close contact with God means.”

Among the Cardinal's concelebrants in the packed St. Stephan’s Cathedral were the bishop of Feldkirch, Klaus Kueng – himself a member of Opus Dei – and the assistant bishop of Vienna, Ludwig Schwarz; Archbishop Jan Sokol of Bratislava, Slovakia, was originally scheduled as a concelebrant but was unable to attend because of illness. However, many Slovakian pilgrims were present and were greeted in Slovakian by Cardinal Schönborn. (Opus Dei's east central European activities are administered from Vienna.)

The regional vicar of Opus Dei, Fr. Martin Schlag, said at the end of the mass that Opus Dei existed to serve the Church. As a personal Prelature, Opus Dei is an “instrument of the global Church at the service of the local Church.”

After the celebration, Cardinal Schönborn unveiled a plate at the Mariapocs Altar that commemorates Escriva’s formulation of the prayer “Sancta Maria, Stella Orientis, fillios tuos adiuva”(Holy Mary, star of the east, help your children), during a visit to Vienna in 1955. 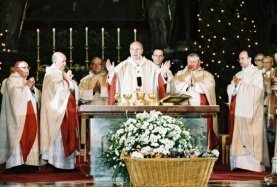 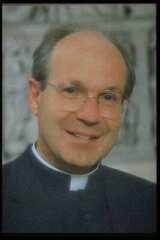 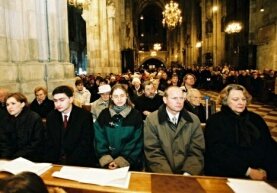 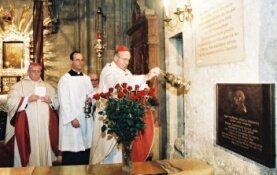 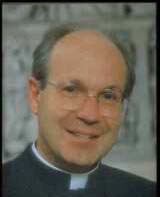