Canonization Cause Opened in Boston for Fr. Joseph Muzquiz

On June 2, the canonization cause of José Luis Muzquiz was formally opened. One of the first three priests in Opus Dei, he began its apostolic work in the U.S. With Rome Reports video coverage.

The cause of canonization of Fr. José Luis Muzquiz, was officially opened in the Archdiocese of Boston on June 2. Father Joseph, as he was always known in the United States, was one of the first three priests ordained for Opus Dei in 1944. At the request of St. Josemaría, he came to the United States in 1949 to begin Opus Dei’s work in this country.

Fr. Bryan K. Parrish, acting as the representative for Cardinal Archbishop Sean O’Malley, presided over the ceremony. Also taking part in the ceremony were Auxiliary Bishop Emilio S. Allue, the episcopal delegate for the inquiry, and Fr. David Cavanagh, a priest of the Prelature of Opus Dei, who is the Postulator of the cause. Also present were the other members of the Tribunal for the cause which was appointed by Cardinal O'Malley, as well as a good number of persons who had known Father Joseph.

José Luis Múzquiz de Miguel was born in 1912, in Badajoz, Spain. In 1934, while studying engineering in Madrid, he met St. Jose­maría Escrivá, the founder of Opus Dei. Responding to God’s call, he joined Opus Dei in 1940. Until his ordination as a priest, he worked as a civil engineer building bridges and railroad stations for Spain’s national railroad system. He would eventually obtain three doctorates: Civil Engineering, History and Canon Law.

In 1949 Father Joseph and a young Spanish physicist, Salvador Ferigle, came to the United States to start Opus Dei’s apostolic work. They began in Chicago and within ten years had also established centers in St. Louis, Milwaukee, Boston and Washington. He also helped start Opus Dei’s work in Japan and Canada.

In the late 1950s, he trav­eled extensively, laying the groundwork for Opus Dei’s beginnings in Asia. He subsequently worked in Rome, Switzerland and Spain, and then in 1976 he returned to the United States. He resided in Boston from 1981 until his death on June 21, 1983. He is bur­ied in St. Joseph’s Cemetery in Brookline, MA.

During the ceremony Fr. Parrish said that “Christ's Church is enriched by the saints as they are the living reflection of the face of Christ and a true mark of the pilgrim Church on earth. Therefore it is with great satisfaction that the Archdiocese of Boston now initiates the investigation, the cause of canonization of the Servant of God Joseph Muzquiz.”

Now that the cause has been opened, a tribunal appointed by Archbishop O’Malley will question witnesses about the life and virtues of Father Joseph, following the procedures laid out in the Instruction Sanctorum Mater of the Congregation for the Causes of the Saints. 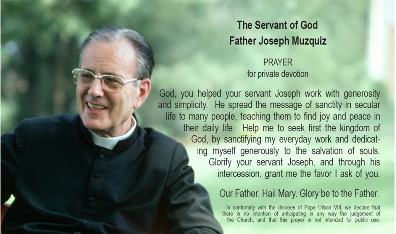 The postulator of the cause, Fr. Cavanagh, summarized the task before the tribunal. “Is the Servant of God Joseph Muzquiz one of those persons who has lived the virtues to a heroic degree?” he asked. “Today marks the first official step in this long process which will, without doubt, give the response to this question.”

For biographical information about Father Joseph a good source is the recent book by John Coverdale, Putting Down Roots: Fr. Joseph Muzquiz and the Growth of Opus Dei (available here ).