Archbishop Monterisi: “The Personal Prelature: a Framework which Enriches the Communion of the Church”

The 25th year of Opus Dei’s existence as a prelature has just begun. On the occasion of this anniversary, the following interview was given by Archbishop Francesco Monterisi, the Secretary of the Congregation for Bishops, the Vatican dicastery on which prelatures depend.

Your Excellency, Pope John Paul II made Opus Dei a Prelature on November 28, 1982. What in your opinion are the benefits that the dioceses can expect from this?

A few months into this 25th anniversary year, one can already begin to get a perspective on the work that the members of the Prelature have carried out up till now. The Servant of God, John Paul II, in an address some five years ago, noted that lay faithful belonging to their own diocese as well as to Opus Dei “enables the special mission of the Prelature to converge with the evangelizing efforts of each particular Church.”

What led John Paul II to make use of the Conciliar form of the personal prelature for Opus Dei?

To answer this question one has to begin by describing just how Opus Dei appeared in the eyes of the Holy Father and the Church at the time that its recognition by the Holy See appeared necessary.

When John Paul II established the Prelature, neither the faithful nor the formational activities of Opus Dei became “independent” of the ecclesiastical hierarchy.

Opus Dei, which originated in 1928 in the heart and mind of St. Josemaría Escrivá, was a new and original apostolic work, with certain characteristics that had to be taken into account when it was recognized in the juridical structure of the Church, that is, in canon law. In effect, one had thousands of faithful dispersed in dioceses throughout the world who had made their own the ideal of life proposed by St. Josemaría—the ideal of responding to the call to sanctification and apostolate amidst the everyday realities of their lives. Those faithful needed special pastoral help to attain that objective, and therefore there were a good number of priests who, in accord with the inspiration of the founder of Opus Dei himself, had felt called by our Lord as secular priests, not as religious, to exercise their ministry among those lay persons who were seeking sanctity in ordinary realities. It was also necessary to entrust this new apostolic reality to the direction of a person, the Prelate, who with his collaborators could coordinate the life and action of Opus Dei throughout the world. These are the elements that led to giving Opus Dei the specific juridical form of a personal prelature.

It suffices to read the Apostolic Constitution Ut Sit, by which Opus Dei was established as a prelature in 1982, to realize that the form of personal prelature is the most appropriate way for Opus Dei, such as it was conceived by St. Josemaría Escrivá in the light of his deep spirituality, to be able to fulfill its mission in the Church.

Are there any other personal prelatures in the Church, besides Opus Dei?

For now no, but nothing prevents others existing in the future. The Holy See will establish them if they have the formal characteristics proper to this juridical institution as it has been configured by the regulations of the Church.

Perhaps your question is motivated by certain press reports that Archbishop Emmanuel Milingo has expressed the intention of creating a personal prelature for his association of “married priests.” A project such as this would be, from the point of view of canon law, a “juridical freak” not a personal prelature, since various elements essential to a personal prelature are lacking, such as a specific pastoral goal, its faithful, etc. Not to speak of the more deplorable aspects of the project which have separated Bishop Milingo from the communion of the Church: the abandonment of priestly celibacy, a great gift of God to the Church, on the part of someone who had freely assumed it “for the kingdom of God,” his grave disobedience to the Holy Father, the scandal to the faithful.

Some believe that they see in the canonical form of the personal prelature a certain status of “independence.” What is the truth of that?

Communion with the Holy See is shown in certain very precise obligations, such as presenting a report on the state of the Prelature every five years, or maintaining regular contacts with the Dicasteries of the Roman Curia, in particular with the congregation which is competent for whatever relates to the Prelature itself, that is, the Congregation for the Bishops.

As for the laity of Opus Dei, being members of the Prelature does not in any way change their condition of being faithful of their dioceses. What is more, they are even more conscious of belonging to the Church, beginning with the particular Church in which they live and work.

The apostolic fruit of Opus Dei benefits the dioceses in which the faithful of the Prelature reside. It has often happened, for example, that the personal apostolate of a member of the faithful of Opus Dei has given rise to the conversion of a friend, a colleague or a relative. The commitment of the laity of Opus Dei, their work in apostolic and social activities, their initiatives, are a stimulus for other faithful: this means spiritual growth in the diocese.

These years of experiencing the presence of the Prelature of Opus Dei in so many dioceses around the world confirms the reality of an intense apostolic work in communion with the diocesan bishops. This communion is worked out in very different ways and forms, but the wish of the Prelature of Opus Dei, of being in harmony with all the bishops of the dioceses in which it is active, is always the same. 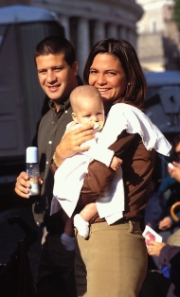 In this sense, one can say, by way of conclusion, that the personal prelature contributes to enriching communion in the Church.

To what extent does the juridical form of the Prelature of Opus Dei strengthen the role of the laity?

Opus Dei exists to help the apostolate of its lay members in ordinary life. Even before the establishment of the Prelature, Opus Dei included lay faithful all around the world committed to putting this ideal into practice in family life, in the world of work and in the other realities of everyday life. The form of the prelature, in the same way as the forms of other ecclesiastical circumscriptions, permits (as John Paul II said in the address that I mentioned in response to the first question) an “organic way that priests and laity work together” for the good of the Church and the progress of the Kingdom of God.