A 90th Birthday Celebrated in Heaven

Dora del Hoyo died on January 10, 2004, just a day before turning 90 years old. Here are some examples of people who have received favors through her intercession. 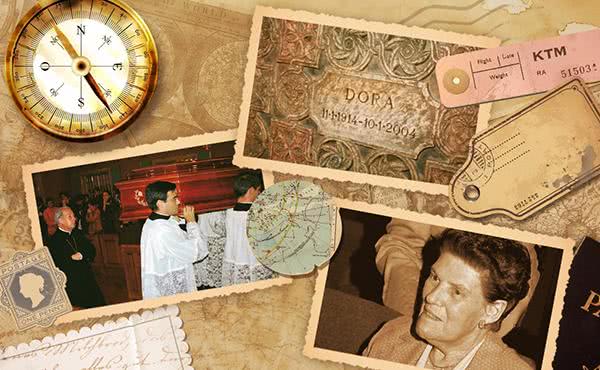 Just as she had wished, Dora celebrated her 90th birthday in heaven, something she had mentioned wanting several times. Since then, many people seek her intercession with faith and trust, in order to obtain all kinds of favors and help from God. We share with you some of the stories that have been sent to this website:

In good times and in bad...

Last week I found out that my brother and my sister-in-law were thinking of separating after 20 years of marriage. They were having some real difficulties, and so I began praying intensely to Dora that there might be a solution to their problems. She is interceding for them, I am sure of it. The day that I learned of their separation, I prayed the prayer card to Dora. That afternoon my brother wrote to me: "We are talking a lot, and we are still trying." I continue to pray to Dora so that she keeps helping them in their struggle.

I learned to cook with Dora

I am a married man, a teacher by profession, and I have six children. A few years ago we had to leave our country for political reasons and we settled down in a new city. I had never cooked before in my life, at least not for other people. Since moving, my teaching work has been “intermittent”. Currently, the one who has a secure contract is my wife, meaning that we divide the housework. My job is to prepare lunch. Since the very first moment, I have sought Dora’s intercession, whose prayer card I have hanging on the refrigerator. Beginning with the menu, all the way to determining the right quantities and seasoning, I talk it over with Dora as I go along. My first entrées didn’t turn out that great, but little by little my children and my wife have started to mention that the food tastes better. The “secret” is Dora.

I never begin to cook without praying the prayer card so that I might be enlightened as to what extra ingredient to add. The dose is always spot-on. Now I have more agility and order in the kitchen, and this also helps me to have more presence of God. I am writing this to thank Dora for her intercession, and also so that it begins to have repercussions in the whole family. Now, in addition, I also ask that I might find a stable job.

The situation of my daughter was very tough: she was left without work after 13 years in employment. We sought the intercession of Dora and after many interviews, she was hired as a receptionist in a biochemical laboratory. She has been working there for a year now, and I thank God and Dora for always helping us.