"An apostle of joy"

Fabio, a cooperator of Opus Dei in Italy, died recently due to a cancerous tumor. A friend of his recounts the story of his life, marked by joy and generous self-giving. 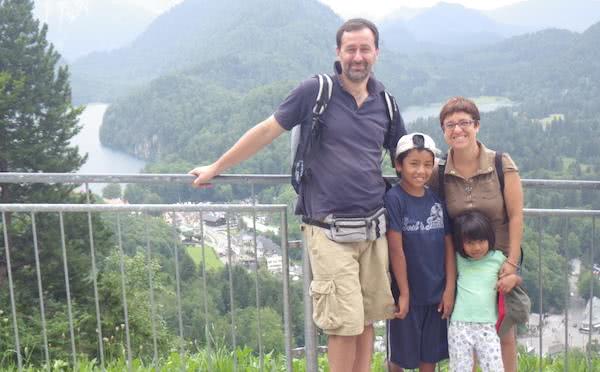 How should young married couples react when they want to have children but they fail to come? How can one stay joyful confronting a life-threatening illness? Giampietro, a friend of Fabio’s, wanted to leave this written testimony to his life that is found below.

In life we meet so many different people. But only some of these people enter deeply into our heart and find a lasting place there.

Fabio was one of these. I met him during a spiritual retreat in late May 2017 and he immediately impressed me with his open and sincere smile. Slowly I discovered his life story.

A cooperator of Opus Dei and manager in a consulting firm, he had left the business to devote himself to free-lance work. Some years ago he and his wife Tatiana took charge of a home, entrusted to them by the judicial court, for boys and girls with serious problems of all kinds.

Fabio and his wife poured out on these young people all their affection and care. They treated them as the children God had not given them, and established lasting relationships with them. He even told me that he had recently become a “grandfather,” thanks to the son born to one of these boys, whom he continued to follow with fatherly concern even though he was now an adult and married.

The court judge also suggested that the couple adopt two of the children they were caring for, which they agreed to with great joy.

But in 2016 the cancer appeared: aggressive and unstoppable.

Fabio fought with all his strength and courage, with a great longing to live. He underwent a number of experimental treatments, while never losing his smile and the serenity with which he always welcomed God’s will.

I’ll never forget our long conversations during his many hospital stays at the Campus Bio-Medico hospital in Rome, where his contagious smile had a big effect on the doctors, nurses and other patients. I told him jokingly that if he decided to ask for admission to Opus Dei from his hospital bed, this could only be done by email, even if it would be the first time this had ever happened.

Exactly one year after our meeting, during a spiritual retreat that he was unable to attend, I received the news that our Lord had called him to himself.

Fabio was well known in his parish, where he carried out volunteer work and gave catechism classes, showing a special concern for young engaged couples. His wife Tatiana recalls that Fabio was known in the parish as the “apostle of joy,” and that everyone had been moved by his cheerful demeanor despite all his suffering.

A few days after his death, Fabio’s wife found in a book a message left by her husband before he died:

Dear friends, I have died. To all those who I have loved intensely, I assure you that I will continue loving you from up there. To everyone else I apologize for losing the wonderful opportunity to love you, but I will do so now from my new life. We are born and we will not die. Fabio.