"We continue to say 'Our Father,' but with the heart we are invited to say 'Papa,' to have a relationship with God like that of a child with his father." In his January 16 general audience, Pope Francis continued his catechesis on the Lord's prayer. 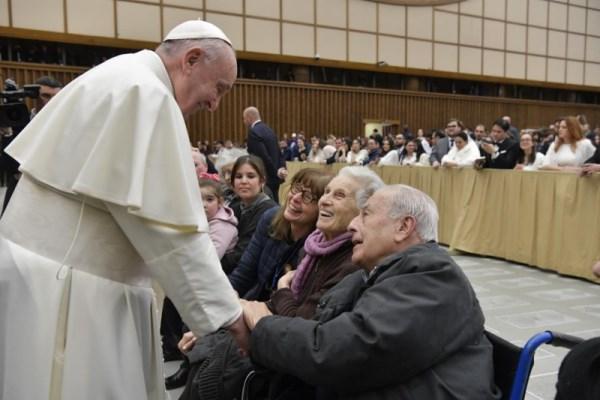 Continuing the catechesis on the “Lord’s Prayer”, today we will start from the observation that, in the New Testament, the prayer seems to seek to arrive at the essential, to the point of being concentrated in a single word: Abba, Father.

We have heard what Saint Paul writes in the Letter to the Romans: “The Spirit you received does not make you slaves, so that you live in fear again; rather, the Spirit you received brought about your adoption to sonship. And by Him we cry, “Abba, Father” (8: 15). And to the Galatians, the Apostle says: “Because you are His sons, God sent the Spirit of His Son into our hearts, the Spirit Who calls out, “Abba”, Father (Gal 4: 6). Twice there returns the same invocation, in which all the newness of the Gospel is condensed. After having known Jesus and listened to His preaching, the Christian can no longer consider God as a tyrant to fear; he is no longer afraid but rather feels the trust in Him flourish in his heart: he can speak to the Creator, calling Him “Father”. The expression is so important for Christians that often it is conserved intact in its original form: “Abba”.

It is rare in the New Testament for the Aramaic expressions not to be translated into Greek. We must imagine that in these Aramaic words, the very voice of Jesus Himself remains as if “recorded”: they have respected Jesus’ language. In the first word of the Lord’s Prayer we immediately find the radical newness of Christian prayer.

It is not only about using a symbol – in this case, the figure of the father – to link to the mystery of God; it is instead about having, so to say, all Jesus’ world poured into our heart. If we carry out this operation, we can pray the Lord’s Prayer with truth. To say “Abba” is something much more intimate, and more moving than simply calling God “Father”. This is why some have proposed to translate this original Aramaic word “Abba” with “Papa”, or “Dad”. Instead of saying “Our Father”, saying “Papa, dad”. We continue to say “Our Father”, but with the heart we are invited to say “Papa”, to have a relationship with God like that of a child with his father, who says “Papa”, and says “Dad”. Indeed these expressions evoke affection, they evoke warmth, something that is projected to us in the context of childhood: the image of a child completely wrapped in the embrace of a father who feels infinite tenderness for him. And for this reason, dear brothers and sisters, to pray well, we must arrive at the point of having a child’s heart. Not a self-sufficient heart: in this way one cannot pray well. Like a child in the arms of his father, his daddy.

But certainly it is the Gospels that introduce us better to the meaning of this word. What does it mean for Jesus, this word? The “Lord’s Prayer” takes on meaning and colour if we learn to pray it after having read, for example, the parable of the merciful father, in the fifteenth chapter of Luke (cf. Lk 15: 11-32). Let us imagine this prayer pronounced by the prodigal son, after having experienced the embrace of his father who has long awaited him, a father who does not remember the offensive works that he has said to him, a father who now simply makes him understand how much he has missed him. Then we discover how those words take on life, take on strength. And we ask: how is it possible for You, or God, to know only love? Do you not know hatred? No, God would answer, I know only love. Where in You is the vendetta, the demand for justice, the anger for your wounded pride? And God would answer: I know only love.

The father of that parable has in his way of acting something that reminds many of the heart of a mother. It is above all mothers who excuse their children, who cover up for them, whose empathy towards them is uninterrupted, who continue to love them even when they no longer deserve anything.

It is enough to evoke this single expression – Abba – for a Christian prayer to develop. And Saint Paul, in his letters, follows this same road, and it could not be otherwise, as it is the road taught by Jesus in this invocation that is a force that attracts all the rest of the prayer.

God looks for you, even if you do not seek Him. God loves you, even if you have forgotten about Him. God perceives in you a beauty, even if you think you have squandered all your talents in vain. God is not only a father; He is like a mother who never ceases to love her creature. On the other hand, there is a “gestation” that lasts for ever, well beyond the nine months of the physical one; it is a gestation that generates an infinite circuit of love.

It may be also that we find ourselves walking on paths far from God, as happened to the prodigal son; or that we fall into a solitude that makes us feel we are abandoned in the world; or even to make a mistake and be paralysed by a sense of guilt. In those difficult moments, we can still find the strength to pray, starting from the word “Father”, but said with the tender meaning of a child: “Abba”, “Papa”. He will not conceal His face from us. Remember this well: perhaps someone has ugly things within themselves, things they do not know how to resolve, great bitterness for having done this or that… He will not conceal His face. He does not close up in silence. If you say “Father” to Him and He will answer you. You have a father. “Yes, but I am a delinquent…”. But you have a father Who loves you! Say “Father” to Him, start praying in this way, and in the silence He will tell you that He has never lost sight of you. “But, Father, I have done this…” – “I have never lost sight of you, I have seen everything. But I have always remained there, close to you, faithful to my love for you”. That will be the answer. Never forget to say “Father”. Thank you.