A year-old Peruvian boy who had come to Madrid with his family for Alvaro del Portillo's beatification was struggling between life and death after falling into a swimming pool. The news about Francisco Villa Corta spread rapidly among those attending the beatification.

Amelia Morillo-Velarde and Roxana Salazar (who goes by “Chana”) met in Mexico, where both happened to be living because of their husbands’ work. The two of them often went to the same park with their young children. They became close friends, although both eventually returned to their cities of origin: Madrid and Lima.

Upon hearing that Don Alvaro del Portillo would be beatified on 27 September 2014 in Madrid, the Salazar family in Peru decided to cross the Atlantic and make a pilgrimage to participate in the events that would take place in Madrid and Rome. Quite a daring proposal, if you consider that the Salazars would be traveling with their eight young children. However, their affection for the future Blessed led them to begin making the necessary preparations.

Chana told her friend Amelia about their decision to make the trip. "I have three children,” Amelia remarked later, “so when Chana told me that they were going to come to Madrid with eight kids, I thought to myself, ‘Where can they possibly stay with so many children?!’ So we decided to invite them to our house. We didn’t know how we would organize ourselves to make beds for so many people but something inside me told me I had to do this, and sure enough, we managed quite well." 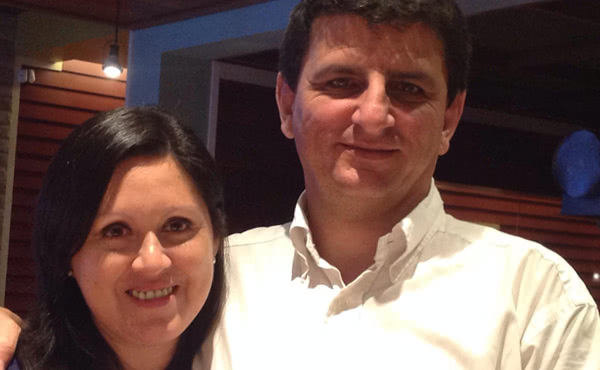 They arrived on September 25 at 6 am after a long plane trip. After greeting their friends at the airport, they went to bed and slept until noon. By midafternoon, the two mothers were in Amelia’s room trying to decide what outfit Chana should wear to the Mass that was to take place in Rome after the beatification, because the Salazar family was going to be bringing up the gifts during the offertory. They then went down to the first floor. Chana became worried when she didn’t see little Francisco, and she and her husband started looking for the boy nervously.

Amelia happened to look at the pool and saw a shadow under a big wheel-shaped float. She described the scene later: "I began saying, ‘No, please, no, no, no’ as I ran to the spot. The child was in the corner of the pool by the cypress floating face down and very still. I grabbed him by the right leg and pulled him out. The child showed no outward signs of life. He was unconscious, pale and unresponsive to any stimulus.”

"On seeing him, his father started shouting. He took the child and shook him vigorously. He was like an inert doll. Then his brothers and sisters came, and his mother and all of them were crying. The boy’s father and I thought the child was dead, but his mother kept up hope and knelt beside the child’s body, turned him over and water came out of the boy’s mouth. At the same time, Chana told all her children to pray to Don Alvaro. I remember Mari Paz, seven years old, came crying to her mother and said: "I saw him, he wanted his toy, I saw him ..." The boy had come to the pool attracted by a duck floating in the water. "

While they were praying the Our Father aloud, an unknown man appeared who began to attend to the baby. He was doing some maintenance work two houses down the road and, upon hearing the screams, threw down his instruments, ran over and knocked on the door, where one of Amelia’s daughters let him in.

"I was shocked,” Amelia recalled, “because I didn’t hear or see him coming. It was like an apparition and I thought he was an angel... someone sent by God. I later learned that his name is Rafael, and that he lives in Barajas, but is actually from Peru and had been a volunteer firefighter there, fortunately for us. He also told me that he belongs to the Brotherhood of the Lord of Miracles, highly revered in Lima. Rafael breathed air into the child but did not press down on his chest because this can be dangerous for a small child. He asked for a blanket and I brought him one. The child began to have a better complexion. He also gave us encouragement during those difficult moments and, thanks to him, I was able to calm down. " 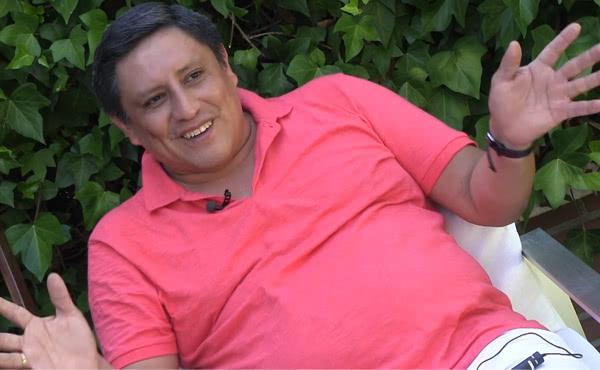 Fifteen minutes later the police arrived, and they found the boy in very bad shape and in cardiac arrest. They thought he wouldn’t recover, as they wrote in their police report and repeated several days later to Amelia. Five minutes later, the emergency medical team arrived, and after a quarter of an hour finally managed to resuscitate the child, who began to cry. After an hour of stabilization, they put him on a ventilator and transferred him to the ICU [Intensive Care Unit] in the Pediatric Hospital “La Paz” in Madrid.

"All this time my friend was on her knees praying the prayer card to Alvaro del Portillo,” recalled Amelia. "When I calmed down and stopped crying, I knelt beside her and she put a rosary in my hands. Then I accompanied the parents to the hospital with the young boy. Their other children were left in my husband’s care, whom I had called urgently to come home from work.”

Chana continued praying the prayer card outside the door of the ICU and remained there for several hours while her husband greeted the visitors who began to arrive. The doctor came out to ask how they had found the baby, whether moving or floating head down. She was told it was the latter, and her head dropped with a worried expression. 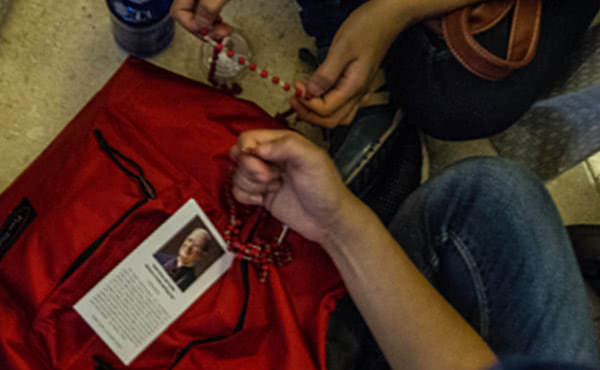 "We saw the baby pass by on a stretcher. They were going to do a CAT scan and he seemed to have quite good color. His face was flushed because of the fever,” Amelia recalls. “At midnight I went home but my friends stayed at the ICU praying all night. I promised to do a pilgrimage on the way of Santiago if the child recovered. "

The next day, in the morning, Chana and Eduardo returned to Amelia’s house to see the rest of the children. “Chana told me she had heard the boy say ‘mama,’ and that he seemed to be doing well. And she added: ‘The power of prayer’.” Francisco was out of danger but it still wasn’t known what the after effects would be.

Amelia suggested to Chana that she should attend the beatification of Alvaro del Portillo to give thanks, and she did so. “We were very hopeful and peaceful,” says Amelia, “and after receiving Communion, I thanked our Lord with all my soul for the miracle. Many people greeted her and said they were praying for Francisco.” 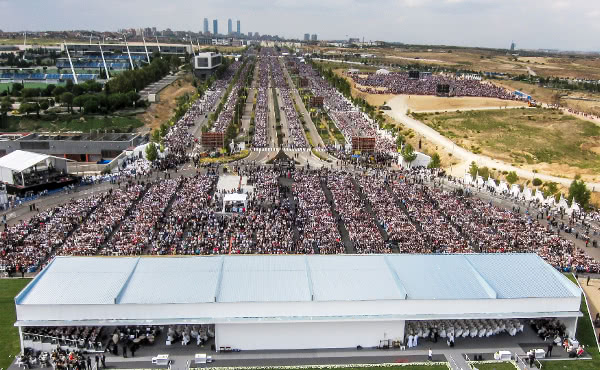 On the 27th, the baby remained in the ICU with a very good prognosis. In the afternoon Rafael, the man who had assisted the baby, came over to Amelia’s house. They learned about his background and the details that made his appearance at that moment so providential.

Late in the day, they received a call from the hospital saying that the boy was out of danger and they could go see him. He was very restless and didn’t like all the needles, and they were going to move him to a regular room. His parents hurried over to the hospital, where the doctors admitted they were surprised he had survived.

“Monday September 29 was the feast day of Saint Rafael,” continues Amelia. “It occurred to me to congratulate Rafael by Whatsapp, so Chana and I searched Google for an image to send him. I thought to myself, ‘Today, on the feast of Saint Rafael, Francisco is going to be discharged from the hospital,’ and I remarked on this to my friend. On the internet we found out that the archangel is the patron of pilgrims and that his name in Hebrew means ‘God heals’ or ‘the medicine of God.’ That day same day, Francisco was discharged in full health without any aftereffects.”

At 5.15 they brought Francisco home and everyone went to greet him. Then they went to see Rafael and brought the child to him. There they met his family and spent an enjoyable time together. 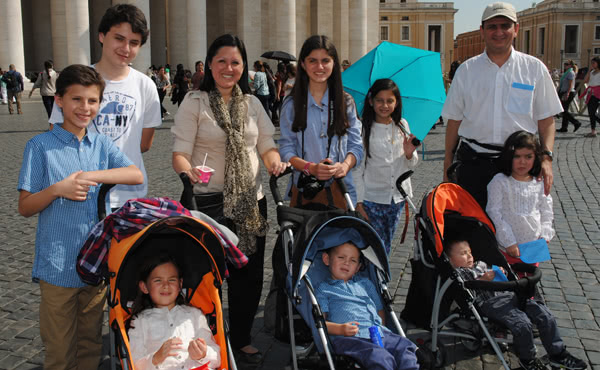 The Villa Corta family traveled to Rome on September 29, as they had planned. Francisco began to run a fever so they went to a clinic where tests were done. They asked the new Blessed that the fever would go away and the boy soon recovered. Those were exciting days. They were able to spend time close to the remains of Blessed Alvaro, and met the Chilean boy whose miraculous cure had made the beatification possible.

On October 10 they returned to Madrid, and had a flight to Lima on the 11th. Before leaving, they had one last chance to meet with Rafael and with Amelia's whole family. They all felt part of a very special event that will keep them united for the rest of their lives. 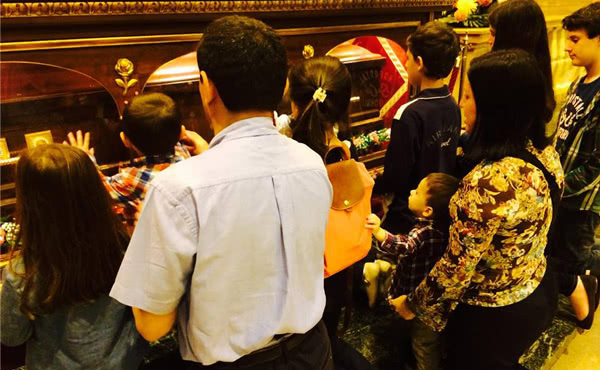