Guadalupe: A True Friend and Apostle

An article by Fr. John Wauck published in "Aleteia" about the soon to be blessed Guadalupe Ortiz. "The sharing of the faith – by word and by example – is an inevitable consequence of a Christian’s union with Jesus Christ." 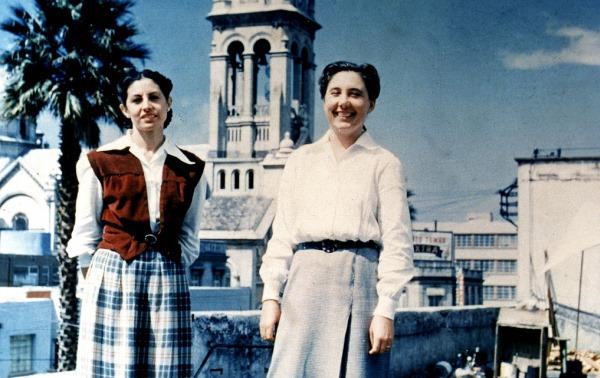 One Sunday in early 1944, returning home from Mass, on a tram platform, Guadalupe Ortiz, a young chemistry teacher, ran into a close friend, Jesus Serrano de Pablo. Guadalupe opened her heart and told him she was looking for someone, a priest, with whom she could talk.

Her friend recommended that she speak with Father Josemaria Escriva, the founder of Opus Dei. Father Josemaria is now a canonized saint, and soon, on May 18, Guadalupe herself will be beatified in Madrid.

Guadalupe would always remember how a conversation with a friend led to events that were so decisive for her life:

“Through an acquaintance with whom I was united by friendship and mutual trust, Jesus Serrano de Pablo, to whom I spoke about my desire of having a spiritual director, I made contact by phone and went to the address that I was given in order to meet Father Josemaria Escriva, about whom I knew, at that point, absolutely nothing. And of course I knew nothing then about the existence of Opus Dei. That interview was a turning point in my life.”

A simple question from one friend to another while waiting for a tram, followed by an exchange of telephone numbers and a phone call. That marked the beginning of a life-long journey that would take the 27-year-old chemistry teacher far from her home – to Bilbao, to Mexico, to Rome, and back to Madrid – and, lead, after her death in 1975, to her beatification, which will take place in May of this year. Thus began a vocation; thus a life was permanently transformed.

So it has always been. That simple scene on a tram platform in Madrid during World War II has something of the air of the first chapter of St. John’s Gospel, where, in the space of just 10 verses, we witness how the news about Jesus Christ spread quite naturally among friends, acquaintances and colleagues: Andrew and John, who are colleagues in a fishing business on the lake of Galilee, meet Jesus, and Andrew tells his brother Peter that he must meet him too. Soon John’s older brother James will also join them. Then Philip, who happens to be from the hometown of Peter and Andrew, runs into his friend Nathanael and tells him about Jesus, inviting him to “come and see” the one whom Moses wrote about. The encounter with Jesus and the apostles’ discovery of their vocation take place in this context of ordinary relationships of family, friendship and work.

Friendship played an important role not just in the beginning of Guadalupe’s vocation but also in the way she lived it over the course of her life. It was inseparable from her vocation to be a saint and an apostle in Opus Dei. A few years after she joined Opus Dei, she moved to Bilbao where, in 1949, having recently arrived in the city, she got to know a young woman named Rosario Orbegozo during a walking tour of the Basque capital that had been arranged by Rosario’s brother. This little excursion led to a friendship, and before long Rosario, captivated by Guadalupe’s naturalness and joy, decided that she wanted to share in her life as a member of Opus Dei. She would be the first woman there to join Opus Dei.

The same phenomenon can be seen in the life of the early Christians. One of the very first Christian writings in Latin, the dialogue Octavius, by Minucius Felix, written in the late 2nd century, tells the story of an excursion taken by three friends – two Christians and one pagan, all lawyers working in the forum – during the grape-harvest vacation in Rome. The three stroll along the Tiber River until they reach the Mediterranean Sea, and there on the beach in Ostia, watching children skipping stones on the waves, the friends discuss the Christian faith in a lively debate. By the end of the excursion, the one who is a pagan has decided that he wants to share the faith of his friends. There on a holiday at the beach his life had changed forever.

Guadalupe’s capacity for friendship was not restricted to colleagues or professional acquaintances. Indeed, it seemed to know no bounds. After she had moved to Mexico in 1950, Guadalupe met the poet Ernestina de Champourcin, who, in exile from Franco’s Spain, was living there with her husband, also a poet, who had been the personal secretary of Manuel Azana, the president of the Republic during the Spanish Civil War. Guadalupe’s father, Manuel, had been a colonel in the army and had participated in the uprising against the Republic which began the Spanish Civil War in July of 1936. After being arrested by the Republican government, he was executed in September of the same year. Despite the painful political and personal history that they shared, the two women became close friends, and Ernestina eventually decided to join Opus Dei.

The sharing of the faith – by word and by example – is an inevitable consequence of a Christian’s union with Jesus Christ and friendship with others. What begins as friendship with Jesus – “I have called you friends,” He told his disciples at the Last Supper – expands naturally to include more and more people. Describing this dynamic, St. John the Evangelist writes in his first letter, “Our fellowship is with the Father and with His Son Jesus Christ,” and therefore “what we have seen and heard we also proclaim to you so you too may be in fellowship with us.”

One of the first women of Opus Dei in Bilbao, Mary Rivero, describes how this was manifested in the life of Guadalupe, whom she met during a retreat in a house borrowed from a friend:

“In that place… I heard about Opus Dei for the first time, and I identified it completely with Guadalupe. For me, Opus Dei was as joyful, optimistic, buoyant and attractive as she was… It’s not that Guadalupe had any special gifts of persuasion, or that she was an extraordinary speaker. There was none of that. What was going on was that she transmitted confidence and trust, and what she said with such simplicity had real impact…. Almost without realizing it, I found myself speaking with her in a tone of great intimacy and sincerity: I wasn’t shy, but Guadalupe was a person who invited you to speak about deeper things: her naturalness, her kindness, that ever-endearing smile…”

Mary Rivero’s description matches perfectly Guadalupe’s own account of her experience with the young women living in the student residences that she ran. In a letter to the founder of Opus Dei, written from Mexico in 1950, she told him, “I talk a lot with the residents; there’s no difficulty with that on their part, but just the opposite – they’re waiting for a chance to tell me all about everything from start to finish, every little thing – toditito, as they say here.”

Just as the apostle John had written to the first Christians, “We are writing these things so that our joy may be complete,” so, in the life of Guadalupe, the sharing of a profound Christian joy, born of the conviction that God is our Father, was a central part of being a friend and an apostle.

Shortly before Christmas in 1946, she wrote a letter to St. Josemaria from Bilbao telling him, “The girls who come here are always amazed to see the joy we take in being together.” A month later, after describing a Sunday afternoon in the center of Opus Dei in Bilbao, which included, along with a time of prayer, singing Basque songs and dancing a sardana while peeling potatoes in the kitchen, she writes: “I’d like all the girls who come here to have a vocation and be as happy as we are.”

The example of Guadalupe in this regard is a living reminder of the truth of the recent words of the prelate of Opus Dei:

“True friendship entails sincere mutual affection, which is the true protection of the reciprocal freedom and intimacy that exists between friends. Apostolate is not something superimposed on friendship, because (as I have written you), ‘we don’t “do apostolate,” we are apostles!’ Friendship is itself apostolate; friendship is itself a dialogue in which we give and receive light. In friendship plans are forged as we mutually open up new horizons.”