A Priest for All Souls: Fr. Jose Maria Garnica

On 14 February 1943, Saint Josemaria first saw how priests could be incardinated in Opus Dei in service to all souls. Fr. Jose Maria Hernandez Garnica was one of the first three priest in Opus Dei. 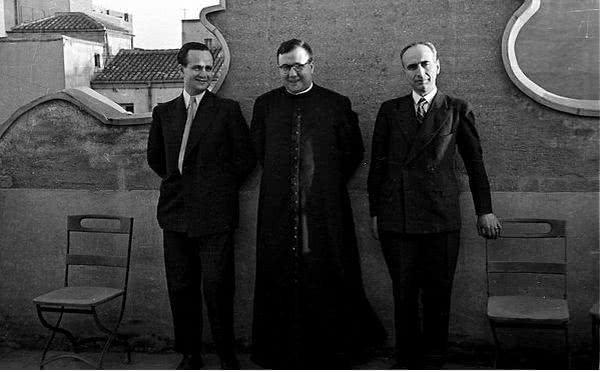 In an interview Saint Josemaria once said: “The Work is based not on enthusiasm but on Faith. The early years were long years, and they were very hard. All we could see before us were difficulties. Opus Dei went ahead by the grace of God and by the prayer and sacrifice of the first few, despite the lack of material resources. All we had was youth, good humour and a desire to do God’s will.”[1]

Fr. Jose Maria Hernandez Garnica was one of the first followers of the founder of Opus Dei, both when working as an engineer and during the years of his priesthood. In these latter years, “Saint Josemaria entrusted him principally with promoting the apostolic work with women, a task he carried out with a great spirit of sacrifice and generous dedication.”[2]

“He carried out this task with trust in the persons he helped and guided. ‘He knew how to love through deeds. He had learned from the founder the virtues tied to charity, perhaps through his love for our Lady and for his mother, whom he sometimes spoke about. He trusted in the virtues women have a special gift for, and insisted that we put them into practice’.”[3]

This is borne out in the witness of Carmen R. Eyre, who knew him in Belgium: “The role of Fr. Jose Maria was fundamental. First, in uniting us to the founder, whom he loved deeply with a fidelity shown in deeds. Second, in appreciating and fostering through his priestly work what has been called the ‘feminine genius’ and teaching us how to make it serve the common patrimony of the Work. I never heard anyone say that they felt wounded by Fr. Jose Maria or that he did not understand our situation, the specific way of being and understanding the world that is proper to women. Hence the humble and discreet figure of Fr. Jose Maria will become a reference point for those who over time carry out similar tasks.”[4]

In 1956, Fr. Jose Maria was given new responsibilities: “His main task became that of providing spiritual guidance and doctrinal orientation to the faithful of Opus Dei, with a special dedication to the means of formation offered by the Work to diocesan priests. He spent a lot of time visiting them and getting to know them better, trying to give a supernatural tone to his conversations, without sentimental words or platitudes. Although his way of being was somewhat formal, with his jokes he imbued the get-togethers with cheerfulness.”[5]

Fr. Jose Maria was a model of the common sense, supernatural sense, and sense of humour of those guided by God’s grace in striving to sanctify their daily tasks.