A Nurse in Haiti

Dawn Ribnek is a nurse practitioner in Chicago, Illinois, and a member of Opus Dei. She was on a service project in Haiti when the country was struck by the devastating earthquake on January 12, 2010.

This was my fourth trip to Haiti to run a small mountain clinic for a week with four other nurse practitioners, most of them from the University of Illinois in Chicago (UIC). These trips are also service-learning experiences for nurse practitioner students from UIC, whom we team up with and teach as we see patients. Our entire team is part of Little by Little, a non-for-profit organization that focuses on improving the health of children and families in Haiti.  Through Opus Dei I have learned to always see my work in health care as an opportunity to serve others. Being able to use my work to serve the poor in Haiti has been a special privilege for me.

This year, we saw over 1,000 patients in five days from January 7-12 in the little village of Gramothe on the side of a mountain just outside Port-au-Prince. Many Haitians we saw walked over a day’s distance and spent the night in the open air waiting for us to see them.

Our final day for the clinic was January 12. We saw our last patients by 4pm, cleaned up and left. Most of us decided to walk home, relax in the sun, stop to see some children from the village one last time and just enjoy our final day before our flight Wednesday morning. We made it down the mountain, walked some distance along the dry riverbed filled with white rocks and boulders, and started trekking up the winding road on the next mountain past some very simple homes and several long cinder block walls. At 4:53, just after passing one of the walls, the ground starting shaking, almost knocking us down, and a very loud rumble started. 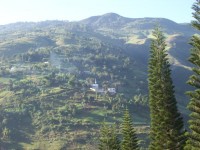 At first we didn’t know what was happening. Once we realized it was an earthquake, we ran back to the house as fast as we could. Everyone was outside, safe but very scared. Our immediate thought was for the people in Gramothe. Six of us hopped on three all-terrain-vehicles (ATVs) and headed down our mountain, across the riverbed, and back up the other mountain towards the village and clinic. Most of the people in the village were outside; no one was seriously hurt, and although their homes were damaged, the damage was not severe.

Willem from our group took a little girl we found injured from a falling rock to a small nearby hospital. He discovered the hospital had just one doctor and several nurses. By that time, over a hundred injured people were starting to fill the hall and spilling out onto the parking lot. He rushed back to bring us to the hospital to start helping in any way we could.

It was not until this moment that the magnitude of what had happened started to sink in. Two people took a truck up to our own little Gramothe clinic to pack whatever supplies we had left up there. The rest of us hopped on a second truck and someone suggested we start praying. We prayed most of the way to the hospital. I had a prayer card of St. Josemaría with me and through his intercession I asked God many times to give us the strength we needed to handle whatever faced us that night. At the hospital we formed a human chain to be able to get in the doors and down to a room at the far end. It was shocking to walk past so many injured people, most of whom had had some part of a building fall on them. 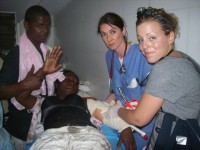 We saw and stabilized more than one hundred severely wounded patients that night, working well past midnight. The injuries are indescribable but I will never forget the faces of the patients and families we saw. They were faces searching for hope – any kind of hope – and help for themselves and their loved ones. We were very short on supplies but used anything we had: cut-up scrubs were used as bandages, tourniquets and slings, pipes were used to splint fractures, and pieces of T-shirts were used to wash wounds. After we saw everyone who had been waiting, the first large aftershock rocked the building and we left and went home. The church in Gramothe was still lit up and singing voices could be heard in the dark, praising God in the midst of the tragedy.

Over the next two days, we set up a mini-clinic in the yard of our host family and continued to treat many wounded Haitians who walked to us or were carried into the yard on old mattresses. Many of these wounds needed to be treated in an operating room in the United States, but we did the best we could. On Thursday as we saw patients, we could hear songs from the Gramothe village church: it was the funeral of the first little girl we helped in the riverbed after the earthquake. 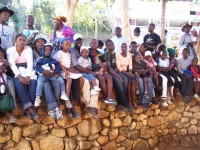 We returned to the States on January 16. I have settled back into life in Chicago and am back at work as a pediatric nurse practitioner. I continue to pray for the people in Haiti in such desperate need, and thank God for giving us the opportunity to help them as much as we could both before and after the earthquake.