A Love That Transforms The World

An article by Cardinal Angelo Amato published in "L’Osservatore Romano" on 29 April 2021, for the presentation of a book collecting favors received through the intercession of Blessed Alvaro del Portillo. 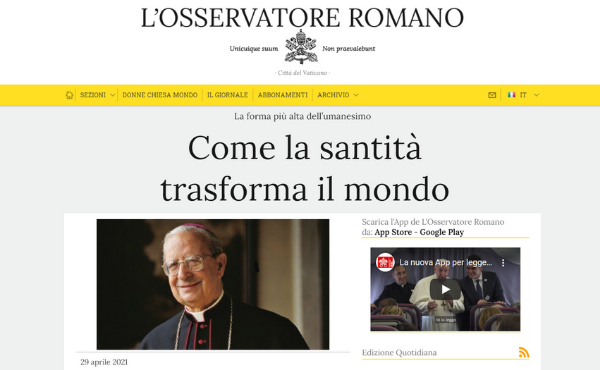 The article below was published in L’Osservatore Romano on 29 April 2021:

"In ogni circostanza. L’intercessione del Beato Álvaro del Portillo" [In any circumstance. The intercession of Blessed Alvaro del Portillo] is a book by Francesco Russo (Elledici, Turin, 2020) which collects stories and testimonies of people who have received favors by invoking the intercession of the Spanish bishop. At the helm of Opus Dei from 1975 to 1994, del Portillo was raised to the altars in 2014 in Madrid during a celebration presided over, in the name of Pope Francis, by the cardinal prefect (now emeritus) of the Congregation for the Causes of Saints, whose text for the presentation of the book we publish below.

The Church, a communion of faith, hope and charity, bears witness to God’s love for the world, and throughout history is a sign and instrument of sanctification for all peoples. The saints are those who in a clear and ascertainable way make this goal a reality in their own lives.

They are the seeds of a new life sown in the furrows of time, people who have attained the fullness of the perfection of love and are thus able to illumine the minds and hearts of the women and men of every epoch, to enkindle faith in them anew, to encourage their generosity in striving to overcome a crippling mediocrity, to renew interpersonal relationships in truth and in justice. The saints long to help all mankind, so that no one is marginalized or defeated by hopelessness and sorrow in their lives.

The saints are faithful, constant and credible witnesses to a love that transforms the world through Christ’s paschal mystery. The sentiments and ideals that inspire their lives reflect the highest human values. Above all, in every situation they seek the glory of God and a sincere charity imbued with tenderness for their neighbor.

Deeply immersed in their milieu and era, they give expression to the distinctive characteristics and highest qualities of the people of their time, practically becoming an “identity card” for them, although their influence reaches far beyond geographical limits and the duration of their earthly existence. They are the greatest children of their native land, exemplary figures of the best talents of their people. Countries with a long-standing Christian tradition will always be able to find in the memory of their saints a fertile spiritual and cultural heritage, in order to be able to continue constructing their future by responding to new challenges and outlooks. And those peoples and countries who have only recently received the gift of evangelization can also find in them a “root,” an anchor for their authentic development.

Announcers and implementers of universal values, the saints are “mediators” in the construction of peace, in dedication to works of solidarity and assistance to the most needy, in the protection of life in all its stages, in the care of creation, in the defense of consciences, in the importance of religious freedom – the standard and foundation of all other freedoms.

The saints are passionate seekers of the truth, which is the deepest value of human culture. They are the first and most credible “cultural catalysts,” and teach us how to live in obedience to the truth and in generous service to a full respect for human dignity.

Extraordinary promoters of renewal in the Church and in society, their example and teachings mark out for us a path that can be followed with renewed enthusiasm. Also today the Church, as has always been the case in her history, is called to a renewed vision in order to be able to respond ever better to our Lord’s expectations.

By retracing their footsteps, the Christian community and each believer will find ways to joyfully take on their responsibility for a new evangelization and work with renewed enthusiasm in the service of the good. The Church’s pastors will undertake their ministry with zeal and humility, guiding the People of God in evangelical holiness; religious will grow in fidelity to their vocation and, guided by the evangelical counsels, highlight the centrality of God and the primacy of the supernatural in each person’s life; the dialogue between cultures will take place in a spirit of sincere welcome and mutual esteem and bear abundant and lasting fruit in the search for peace and fraternity among all peoples.

Has this night ended?

Many signs on the horizon tell us that this night, fortunately, is now over.

But many other disturbing signs warn us that the road to becoming fully human is still long and filled with tears. Barbarism is still among us and, today as yesterday, it is clothed in hypocrisy and intolerance.

The prophet once again encourages us: “Your watchmen raise their voices” (Is 52:8); “all the day and all the night they shall never be silent” (Is 62:6).

It is a comforting prophetic vision: the Lord will never let the Church and the world lack saints.

This book is a “tile” in a large mosaic.

A mosaic that gives testimony to the reality that the prophet’s promise continues to be fulfilled.

Prefect Emeritus of the Congregation for the Causes of Saints