“A Caress from God”

Joaquin Romero has been wheelchair-bound with multiple sclerosis for almost 20 years. But he refuses to give in to pessimism and has no doubt that his disability is “a caress from God.”

Joaquin Romero wanted to know the hard facts when he was first diagnosed 20 years ago. Multiple sclerosis is an incurable and progressive degenerative disease. He asked his doctor to explain exactly what to expect in the future. “You will become quadriplegic, blind, mute and bed-ridden. But the worse is that it is incurable, and often what began as a physical illness could lead to depression.”

Presently, Joaquin is 41 and has almost lost the use of his left arm, his sight has deteriorated and he is often short of breath. When he realized that he needed more help to fend for himself, he decided to start a company with his brother Borja to help disabled people like himself. He is an architectural technician and his brother an engineer, and together they have started B & J Adaptations, presently the only Spanish company in this field. Through his company, Joaquin has made his voice heard and has helped many people to adapt their living space to the needs of their new illness.

“This is not going to be a sprint but a marathon”

One day while playing soccer, I ran for the ball and kicked hard, and then I started to feel like there were ants all over my body; then came the double vision.

I was then 22 or 23 years old. I had my life perfectly planned. After military service, I studied technical architecture, with the hope of one day overseeing high-rise construction projects. And I liked soccer. One day while playing soccer with my friends, I sprinted for the ball and kicked hard, and then I started to feel like there were ants all over my body; then came the double vision.

When the neurologist told me the diagnosis, I recognized the name of the disease. I just wanted him to prescribe some pills and settle everything.

“No, no, Joaquin,” he said, “multiple sclerosis is incurable.”

“Okay, so I’ll have to live with it,” I told him without any idea of what I was going to face.

“It is a progressive, degenerative disease. This is not going to be a sprint but a marathon. You will have to be well prepared, and measure out your energy, not with great strides, but one step at a time.” 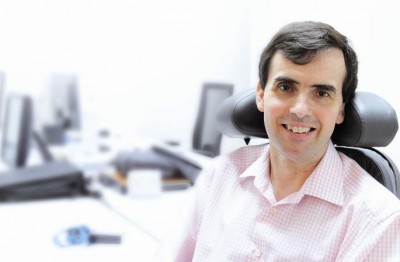 I didn’t know what to think then; I couldn’t grasp what it all implied. I’m the type that likes to have everything under control, but this time, it wasn't going to be possible. Thank God I was already a member of Opus Dei for some years. I always had someone to confide in and talk with about my problems. We would go for a drink by the sea (I love the sea), and with that excuse, I got to know all the bars along the coast of Barcelona.

Not everything gets resolved talking, but you become more objective. Often people with this disease get trapped in silly problems that can be solved.

So you didn’t allow it to get you down?

I have only now begun to sense the great meaning that lies hidden behind my illness.

Of course not. And when I realized that I could no longer fend for myself, my brother Borja and I adapted the house so that I could control everything from either the chair or bed, or from the computer. That's how the company started in these 30 square meters. Today it is the only company in Spain that helps disabled people with similar problems adapt their living space to their disabilities.

You must have seen a lot of suffering… 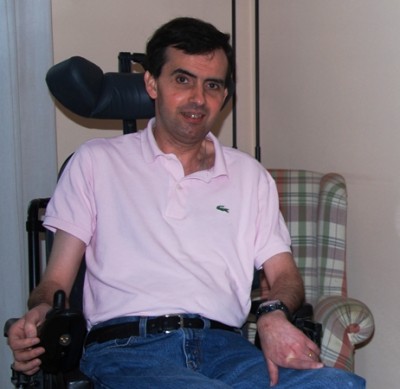 Once a lady called asking for help for her ailing husband. I said I would look into it. After some time, I called but she was not around, since she had gone to her husband's funeral. Since then I vowed not to waste a second of my life and do all I could to help those who came to me. Sometimes a customer comes in for a machine and then before they go, they ask: “And how are you managing to hold up?”

What do you say? Can suffering be loved?

No; not for itself; no. Suffering makes no sense; you have to find the meaning behind it. I’m telling you the truth about what I feel and see. I reply that I'm going through some of the best moments of my life because I have only just begun to sense the great meaning that lies hidden behind this illness.

Suffering is a mystery, and there is no handbook that says: number one, how to cope with suffering; number two, what to do when it lasts more than two weeks... How easy it would if we already knew what to do about it!

I think God has made us free so that we have a chance to discover its meaning for ourselves. 'What an unjust Father!', you might think. But that's the easy way out. Why not blame yourself? I don’t think God lacks intelligence or intuition; we are the ones who are slow to understand. We should ask ourselves why we can’t understand it, and strive to get closer to Him through the sacraments.

When I get to heaven, I will get down on my knees, because then I will be able to, and tell Him, “Incredible. It has been stupendous.”

And you have no complaints?

In terms of health, I’ve lost everything. But one thing I have never lost is interior peace, and the sureness that the way I am facing all this really works. I don't remember ever having felt as good as I do now.

For me, it seems that my life is like a miracle, a caress from God. It may sound crazy, but no man would have enough imagination to invent what I’m going though; no, only God knows and is capable of it.

Have you ever had any moment of despair, a temptation to say “enough is enough”?

Sure, many times. There were moments when I thought God had abandoned me, and when I hit rock bottom. I remember one client who said he wanted to commit suicide. I told him that I too had thought about it myself and even had a suicide plan carefully drawn out…. it was easy! But then redirecting the conversation, I told him, “Don’t you think it is much more beautiful to be alive?”

Some people say that euthanasia is a solution

Who says so? The sick or those who have to put up with the sick? If you really love the sick, you cannot simply shut them out with your ‘solution.’ That is unjust and selfish. They need to see that there are many options. You can't settle such an important issue by simply saying: 'Have a good death.' If you really love those who are sick, you have to do everything you possibly can to help....

What if the patient himself wants it?

Then I’d put myself in his place. We must talk face to face. I would tell him. “Don’t think you're a useless piece of junk, a leech.... No, exactly the opposite. You have the opportunity to show that suffering can have great value. That it's a mission.” It is important that people understand that a person with a disability is not a useless person.

Did you discover all this overnight?

No, no! At 15, none of these answers had even entered my head. These are thoughts that have become clearer over the years, and now I see it all clearly... but it has been more than 20 years!

What will you say to God when you get to Heaven?

Thanks a million and a big kiss for the life He has given me. Besides I would not have wanted any other life. I want only what he has wanted. I will get down on my knees, because then I will be able to, and tell him, “Incredible. It has been stupendous.”