1,000 Christmas Baskets for the Poor

In a letter written to Saint Josemaria on January 9, 1960, Guadalupe Ortiz expressed her great joy in helping to distribute Christmas gifts to the poor in Madrid's outlying districts. 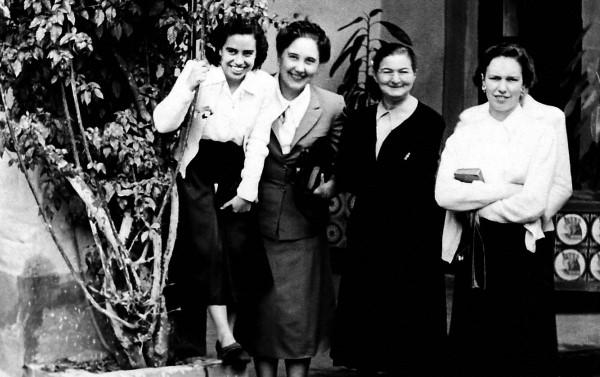 When Guadalupe returned to Spain in the late 50’s after spending some years in Mexico, her concern for the poor continued. For at least three consecutive years, Guadalupe organized among her friends and acquaintances in Madrid a plan to help disadvantaged people enjoy Christmas in some of the poorest outlying districts. The focus was on the neighborhoods of Belmonte and Valdebebas, where there were two medical dispensaries that were staffed by people of Opus Dei and their friends, and that Guadalupe took an active interest in.

In a letter written to Saint Josemaria in 1960, we see her joy in being able to bring Christmas gifts to the poor, and also her sense of humor when alluding to her own quite serious heart condition: “On Christmas Eve we obtained a donation of baskets with an almost complete Christmas dinner. Thus all the families in the two neighborhoods where we have the dispensaries (Belmonte and Valdebebas) ate that day ham, chorizo, nougat ... -- what the rich eat. We distributed the baskets house by house. Everyone helped out with great joy.

Father, I'm sure you would have liked to see how everyone pitched in. The drivers of the trucks, the husbands of the ladies, the boys from the neighborhood who brought us the boxes filled with the gift baskets…. No one was overlooked since we had a total of 1,000 baskets, more than the number of families in the two neighborhoods. We also brought some baskets to the poor in the San Miguel district, although we had already provided for them in advance since a group of ladies distributed gifts and meals to the poor there, as we have done in previous years and is now a tradition. Many of the poor were elderly women nearly 80 years old (almost all of them with heart disease -- which seems to be a guarantee of growing old). Many of them cried on seeing the affection with which the ladies brought them such good things; one woman who has absolutely nothing and lives on charity thought it was too much and said that the meal was enough, and the rest should be given to someone else.” (Letter to Saint Josemaría from Ortigosa del Monte, Segovia, January 9, 1960).

Two years later, Guadalupe wrote to the people of Opus Dei living in Rome, making reference to the fact that this gift-giving at Christmas has now become a tradition: On Friday the 22nd we will distribute the baskets with the Christmas dinners in Belmonte and Valdebebas, and San Miquel and Gestoría. House by house, until we reach 1,000. I’ll write to tell you more about it. It is the third year we have done this. The Christmas baskets are donated by the supermarkets (Letter to the Central Advisory, Madrid, December 20, 1961).

Years later, in 2014, Valdebebas welcomed the large crowd of pilgrims who came for the beatification of another Madrid native, Alvaro del Portillo, Saint Josemaria’s first successor at the head of Opus Dei.