Commentary on the Gospel: "To every one who has will more be given"

Gospel for the 33rd Sunday in Ordinary Time (Cycle A), and commentary. 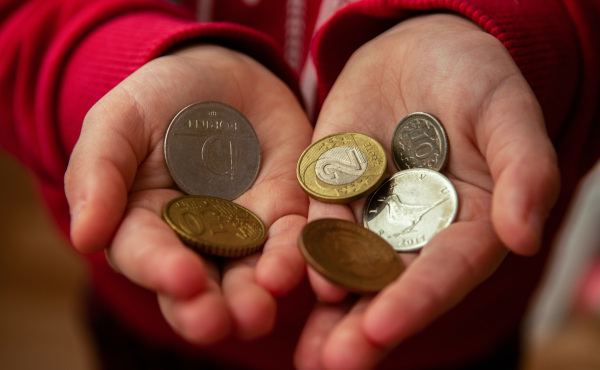 Jesus told his disciples this parable:

“A man going on a journey called his servants and entrusted to them his property; to one he gave five talents, to another two, to another one, to each according to his ability. Then he went away.

He also who had received the one talent came forward, saying, ‘Master, I knew you to be a hard man, reaping where you did not sow, and gathering where you did not winnow; so I was afraid, and I went and hid your talent in the ground. Here you have what is yours.’ But his master answered him, ‘You wicked and slothful servant! You knew that I reap where I have not sowed, and gather where I have not winnowed? Then you ought to have invested my money with the bankers, and at my coming I should have received what was my own with interest. So take the talent from him, and give it to him who has the ten talents.

For to every one who has will more be given, and he will have abundance; but from him who has not, even what he has will be taken away. And cast the worthless servant into the outer darkness; there men will weep and gnash their teeth.”

Today the Church celebrates the thirty-third Sunday in Ordinary Time, the last one before the solemnity of Christ the King that closes the liturgical year. The Gospel for this Sunday is the parable of the talents, which makes clear our need to take advantage of the gifts we have received to serve God and others.

The story of the man who departs and entrusts his possessions to some servants to negotiate until he returns has two Gospel versions: that of Luke (19:11-27) and this one of Matthew. In Matthew’s version, the three servants are entrusted with five, two and one talent respectively, “each according to his ability.” After a long time, the master in the parable returns. The first two servants are rewarded for their efforts. As Saint Jerome remarks, “both receive the same reward, not because of the great amount they have gained, but because of the solicitude of their will.”[1] These two servants employed all that they had received, whether much or little in appearance, for their master’s benefit. Hence he calls each of them a “good and faithful servant” (v. 21).

In contrast, the third servant doesn’t think about his master or making his property render fruit, but about his own security. So he buries his talent to return it intact. The master harshly labels him “a wicked and slothful servant” (v. 26). It is striking that the single talent is taken from him and given it to the one who already had ten. This might seem to us incompatible with God’s goodness and mercy. Also the master says that the talent should have been entrusted to “the bankers” so it could have earned interest. The meaning of this parable puzzles us at first sight and requires some reflection.

Pope Francis stresses that the patrimony the master entrusts to his servants in the parable represents above all spiritual goods, that is, “his Word, the Eucharist, faith in the heavenly Father, his forgiveness.”[2] Whoever takes advantage of these gifts and makes them known to others, enables God to make their own life fruitful.

Since the patrimony consists above all in God’s grace, those who receive it with the readiness to be generous enable themselves to receive even more graces. In contrast, those who fail to take advantage of the goods that God gives them, and who “bury them” out of laziness and a lack of generosity, who don’t pray or frequent the sacraments, voluntarily deprive themselves of receiving more graces and yielding more fruit. Hence our Lord concludes: “to every one who has will more be given, and he will have abundance; but from him who has not, even what he has will be taken away” (v. 29).

When we generously prepare ourselves for God’s service, in our personal prayer and especially in the sacrifice of the altar, it is like putting our talents in the hands of “bankers” who guarantee their fruitfulness. While those who always selfishly seek their own benefit stifle their ability to render fruit.

As Saint Josemaría said, the talents also represent our human qualities and personal abilities: “How sad not to turn to good account and obtain a real profit from the few or many talents that God has given to each man so that he may dedicate himself to the task of serving other souls and the whole of society! … Your buried talent, dig it up again! Make it yield, and you will taste the joy of knowing that in this supernatural business it does not matter if in this world the results are not wonders that men can admire. What really matters is to hand over all that we are and all that we have, striving to make our talent yield, and constantly exerting ourselves in order to produce good fruit.”[3]

Finally, a good way to make the talents we have received bear fruit is to help others to discover their own talents. In short, to be eager to “energize” the talents of others so that they too can share in this divine fruitfulness.