Some homilies, articles, videos and carols that can help us draw close to the Infant Jesus at Christmas time with the childlike piety of Saint Josemaria. 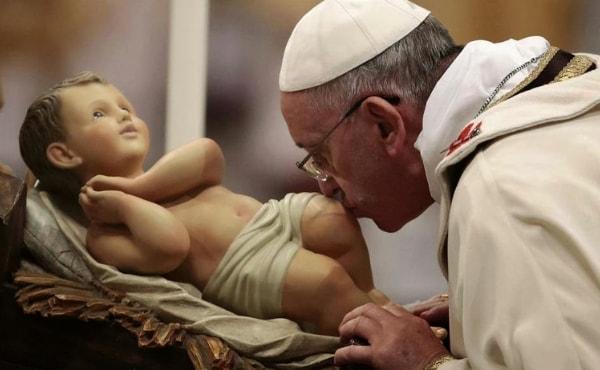 Homilies and articles about Christmas

"The Joy of Serving God," Homily of Saint Josemaria from Christmas 1973

Christmas Time: The Light of Bethlehem

Bethlehem Ever Present in the Tabernacle

Reflections on the Christmas Crèche (article by Bishop Javier Echevarría)

The Doorway of Humility

Homily of Saint Josemaria on the Epiphany (with audio recording)

Why do we celebrate Christmas?

The Infant Jesus of Saint Josemaría

Among the treasures of the Royal Monastery of Saint Elizabeth in Madrid is this seventeenth-century wooden figure of Baby Jesus. The Augustinian Recollect Sisters still have a vivid memory of Saint Josemaría, then a young priest, who was their chaplain from 1931 and rector of the Foundation from 1934. He wrote in his personal notes: "On my way out of the cloister they showed me, in the vestibule, a lovable Christ Child. I have never seen a more wonderful Baby Jesus! Totally captivating. They uncovered it. He has his little arms crossed on his breast and his eyes half open. Beautiful. I ate him up with kisses and... would have loved to kidnap him."

He often would ask them for the figure to take it home with him. It was closely linked to many events deep in his soul, favors and special graces. Today the sisters still call it "Father Josemaría's Baby Jesus."

In the book Immersed in God - an interview with Álvaro del Portillo (Cesare Cavalleri, Princeton, 1996), Msgr. Alvaro del Portillo says that Mother Carmen of Saint Joseph "remembers that when the Baby Jesus was in the sacristy of the church during the Christmas season, she would often see how Father Josemaría would talk to it, sing to it and rock it, as if it was a real baby."

"The Child Jesus," wrote Saint Josemaría. "How this devotion has taken hold of me since I first laid eyes on that consummate Thief that my nuns keep in the vestibule of their cloister! Child Jesus, adolescent Jesus — I like to see you that way, Lord, because... it makes me more daring. I like to see you as a little boy, a helpless child, because it makes me feel like you need me."

Saint Josemaría had very fond memories connected with the family's Christmas celebrations. Together with his sister Carmen, he would help his father put up the Nativity scene. And the whole family sang Christmas carols together.

He remembered in particular the one which begins Madre, en la puerta hay un Niño — "Mother, there's a little boy at the door." This carol has a chorus in which the Child Jesus repeats, "I have come down to earth to suffer." The song stayed with him from the cradle to the grave. "When I was three years old," he would say, "my mother would take me in her arms and sing me that carol, and I would very happily go to sleep." In his last years he would be visibly moved, and would become totally absorbed in prayer, whenever he heard this carol at Christmastime. (Listen to this carol in Spanish here.)

1. "Mother, at the door there's a little Child,
Lovelier than the radiant sun
Saying that he's chilled with cold
For his clothes are thin and torn."
"Bring him to the fireside blaze, give him plate and cup;
Loving-kindness these days has nearly all dried up." (x 2)

2. So the Child came and sat down,
Where the fire was bright and warm
And the kindly housewife asked him
What country he came from.
"My Mother's from Heaven, and my Father too
Down to earth I've come, where suffering is my due." (x 2)

3. "Make up a bed for this noble Child
In my alcove, the best we can."
"Don't do that for me, my lady,
In a corner I'll lay me down.
On the cold hard floor I've slept, ever since my birth
Such will be my bedding till I leave this earth." (x 2)