Questions about the Priesthood

"The priesthood leads one to serve God in a state which, in itself, is no better or worse than any other: it is simply different. But the priestly vocation is invested with a dignity and greatness which has no equal on earth" (In Love with the Church, 38). 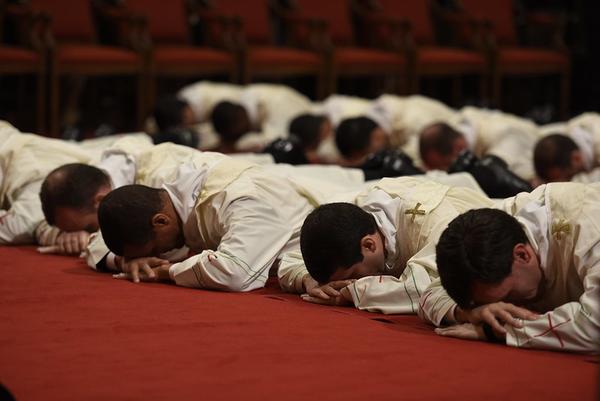 1. What is the priesthood's place in the Church?

2. Who were the priests of the Old Testament?

3. What is the difference between the common priesthood and the ministerial priesthood?

4. What is the sacrament of Holy Orders?

1. What is the priesthood's place in the Church?

The Christian faithful are those who, inasmuch as they have been incorporated in Christ through Baptism, have been constituted as the people of God; for this reason, since they have become sharers in Christ's priestly, prophetic, and royal office in their own manner, they are called to exercise the mission which God has entrusted to the Church to fulfill in the world, in accord with the condition proper to each one.

In virtue of their rebirth in Christ there exists among all the Christian faithful a true equality with regard to dignity and the activity whereby all cooperate in the building up of the Body of Christ in accord with each one's own condition and function.

The very differences which the Lord has willed to put between the members of his body serve its unity and mission. For in the Church there is diversity of ministry but unity of mission. To the apostles and their successors Christ has entrusted the office of teaching, sanctifying and governing in his name and by his power. But the laity are made to share in the priestly, prophetical, and kingly office of Christ; they have therefore, in the Church and in the world, their own assignment in the mission of the whole People of God. Finally, from both groups [hierarchy and laity] there exist Christian faithful who are consecrated to God in their own special manner and serve the salvific mission of the Church through the profession of the evangelical counsels.

No one — no individual and no community — can proclaim the Gospel to himself: "Faith comes from what is heard." No one can give himself the mandate and the mission to proclaim the Gospel. The one sent by the Lord does not speak and act on his own authority, but by virtue of Christ's authority; not as a member of the community, but speaking to it in the name of Christ. No one can bestow grace on himself; it must be given and offered. This fact presupposes ministers of grace, authorized and empowered by Christ. From him, they receive the mission and faculty ("the sacred power") to act in persona Christi Capitis. The ministry in which Christ's emissaries do and give by God's grace what they cannot do and give by their own powers, is called a "sacrament" by the Church's tradition. Indeed, the ministry of the Church is conferred by a special sacrament. (Catechism of the Catholic Church, no. 871-875)

2. Who were the priests of the Old Testament?

The chosen people was constituted by God as "a kingdom of priests and a holy nation." But within the people of Israel, God chose one of the twelve tribes, that of Levi, and set it apart for liturgical service; God himself is its inheritance. A special rite consecrated the beginnings of the priesthood of the Old Covenant. the priests are appointed to act on behalf of men in relation to God, to offer gifts and sacrifices for sins.

Instituted to proclaim the Word of God and to restore communion with God by sacrifices and prayer, this priesthood nevertheless remains powerless to bring about salvation, needing to repeat its sacrifices ceaselessly and being unable to achieve a definitive sanctification, which only the sacrifice of Christ would accomplish.

The liturgy of the Church, however, sees in the priesthood of Aaron and the service of the Levites, as in the institution of the seventy elders, a prefiguring of the ordained ministry of the New Covenant.

Everything that the priesthood of the Old Covenant prefigured finds its fulfillment in Christ Jesus, the "one mediator between God and men." The Christian tradition considers Melchizedek, "priest of God Most High," as a prefiguration of the priesthood of Christ, the unique "high priest after the order of Melchizedek;" "holy, blameless, unstained," "by a single offering he has perfected for all time those who are sanctified," that is, by the unique sacrifice of the cross.

The redemptive sacrifice of Christ is unique, accomplished once for all; yet it is made present in the Eucharistic sacrifice of the Church. the same is true of the one priesthood of Christ; it is made present through the ministerial priesthood without diminishing the uniqueness of Christ's priesthood: "Only Christ is the true priest, the others being only his ministers." (Catechism of the Catholic Church, n. 1539-1545)

3. What is the difference between the common priesthood and the ministerial priesthood?

There are two ways to participate in the one priesthood of Christ.

Christ, high priest and unique mediator, has made of the Church a kingdom, priests for his God and Father. The whole community of believers is, as such, priestly. The faithful exercise their baptismal priesthood through their participation, each according to his own vocation, in Christ's mission as priest, prophet, and king. Through the sacraments of Baptism and Confirmation the faithful are consecrated to be a holy priesthood.

The ministerial or hierarchical priesthood of bishops and priests, and the common priesthood of all the faithful participate, each in its own proper way, in the one priesthood of Christ. While being ordered one to another, they differ essentially.

The ministerial priesthood is a means by which Christ unceasingly builds up and leads his Church. For this reason it is transmitted by its own sacrament, the sacrament of Holy Orders.

This priesthood is ministerial. "That office [...] which the Lord committed to the pastors of his people, is in the strict sense of the term a service." It is entirely related to Christ and to men. It depends entirely on Christ and on his unique priesthood; it has been instituted for the good of men and the communion of the Church. the sacrament of Holy Orders communicates a sacred power which is none other than that of Christ. the exercise of this authority must therefore be measured against the model of Christ, who by love made himself the least and the servant of all. (Catechism of the Catholic Church, n. 1546-1553)

4. What is the sacrament of Holy Orders?

The essential rite of the sacrament of Holy Orders for all three degrees (bishop, priest, and deacon) consists in the bishop's imposition of hands on the head of the ordinand and in the bishop's specific consecratory prayer asking God for the outpouring of the Holy Spirit and his gifts proper to the ministry to which the candidate is being ordained.

Only the baptized male receives validly the sacred ordination. The Lord Jesus chose men to form the college of the twelve Apostles, and the Apostles did the same when they chose their collaborators to succeed them in their task. The college of bishops, with whom the priests are united in the priesthood, makes present and actualizes the college of the Twelve until Christ's return. The Church recognizes herself as bound by this decision of the Lord. This is the reason why women do not receive ordination.

Only a baptized man validly receives sacred ordination. The Lord Jesus chose men to form the college of the twelve apostles, and the apostles did the same when they chose collaborators to succeed them in their ministry. The college of bishops, with whom the priests are united in the priesthood, makes the college of the twelve an ever-present and ever-active reality until Christ's return. The Church recognizes herself to be bound by this choice made by the Lord himself. For this reason the ordination of women is not possible.

No one has a right to receive the sacrament of Holy Orders. Indeed no one claims this office for himself; he is called to it by God. Anyone who thinks he recognizes the signs of God's call to the ordained ministry must humbly submit his desire to the authority of the Church, who has the responsibility and right to call someone to receive orders. Like every grace this sacrament can be received only as an unmerited gift.

All the ordained ministers of the Latin Church, with the exception of permanent deacons, are normally chosen from among men of faith who live a celibate life and who intend to remain celibate for the sake of the kingdom of heaven. Called to consecrate themselves with undivided heart to the Lord and to "the affairs of the Lord," they give themselves entirely to God and to men. Celibacy is a sign of this new life to the service of which the Church's minister is consecrated; accepted with a joyous heart celibacy radiantly proclaims the Reign of God.

In the Eastern Churches a different discipline has been in force for many centuries: while bishops are chosen solely from among celibates, married men can be ordained as deacons and priests. This practice has long been considered legitimate; these priests exercise a fruitful ministry within their communities. Moreover, priestly celibacy is held in great honor in the Eastern Churches and many priests have freely chosen it for the sake of the Kingdom of God. In the East as in the West a man who has already received the sacrament of Holy Orders can no longer marry.

This sacrament configures the recipient to Christ by a special grace of the Holy Spirit, so that he may serve as Christ's instrument for his Church. By ordination one is enabled to act as a representative of Christ, Head of the Church, in his triple office of priest, prophet, and king.

As in the case of Baptism and Confirmation this share in Christ's office is granted once for all. the sacrament of Holy Orders, like the other two, confers an indelible spiritual character and cannot be repeated or conferred temporarily.

It is true that someone validly ordained can, for a just reason, be discharged from the obligations and functions linked to ordination, or can be forbidden to exercise them; but he cannot become a layman again in the strict sense, because the character imprinted by ordination is for ever. The vocation and mission received on the day of his ordination mark him permanently.

Since it is ultimately Christ who acts and effects salvation through the ordained minister, the unworthiness of the latter does not prevent Christ from acting. (Catechism of the Catholic Church, n. 1573, 1576, 1577-1580, 1581-1584)